Nestled in the concrete expansion of the Village Gate complex is Chortke (pronounced Chort-K), a new Persian restaurant owned by Yasha Aghdasi and his wife Rana Rezaei. The word Chortke is Farsi for abacus, which bears a strong resemblance to the shish kabob. Shish is "six" in Farsi, and the owners say that traditional shish kabobs feature six pieces of meat on a skewer. Kabobs are the backbone of the restaurant's menu. A hybrid of a kabob and abacus is featured in its logo, proudly perched above its doorway.

The couple say they purposely chose Rochester's hopping Neighborhood of the Arts for Chortke because of its central location, diversity, and openness to new food concepts. Chortke serves classic Perisan fare presented in a "fast casual Chipotle-style," which means all orders are taken at the counter and there's no table service.

Each visit to Chortke begins with a simple question: what plate will be the foundation of your meal: Rice, salad, half rice-half salad (the most popular with customers), or a wrap? 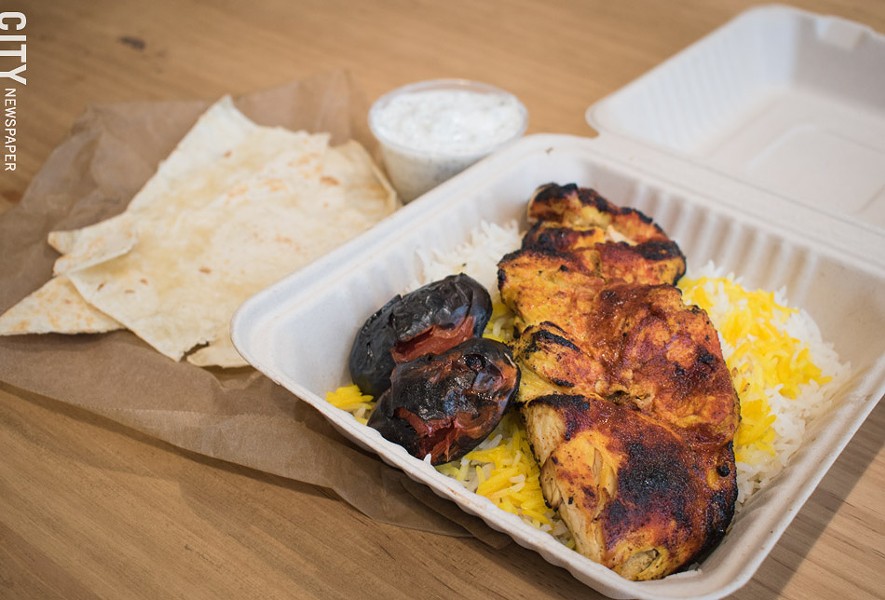 Rice plates are simple, filling, hardy, and inexpensive at just $10.49. The dish starts with an expensive twist: saffron imported from Iran. This ingredient adds a rich flavor and a lemon-yellow hue to its basmati rice, which is centered on a bed of classic off-white basmati rice. The rice is the foundation for a spicy chicken plate, also known as spicy joojeh plate. The joojeh was grilled to perfection with the predictable but gorgeous blend of black seared edges, glistening golds, oranges, and browns speckling both the meat and a grilled tomato. And Chortke's charcoal grill adds a smoky hint to the meat and tomatoes.

Pro-tip: mash the grilled tomatoes into the basmati rice. You won't be disappointed. Other highlights include Chortke's delicious flatbread, homemade eggplant yogurt and hot sauce, and its saffron pistachio ice cream.

"It smells like my grandfather's house," Persian patron Karlie Holt told me on a recent visit. Holt was born in the province of Isfahan in rural Iran but moved to San Diego as a child. She's currently an undergraduate at the University Rochester, and is headed to the university's med school next fall. Holt visited Chortke three times with four different friends. This time, Rana greeted her in Farsi.

"It's nice to be greeted in Farsi and speak my native language," Holt said, beaming. "The rice is incredibly authentic."

After a soft launch late last summer, Chortke is still very much a work in progress. Its look and décor are handpicked by Rana while Yasha continues to tweak the business model. The space has a high ceiling and large windows that look out toward the parking lots behind Village Gate and Anderson Street. The room is spotless, sparse, and typically filled with echoing Persian instrumental music. And there's plenty of seating even at the busiest times of the week.

The owners take turns manning the counter and cooking. They expect to add staff, lower the ceiling, expand the menus, and add art and more home-y touches. Chortke is also planning a revamped website with online ordering and delivery options.

For Chortke speed matters. My first visit to Chortke was on a lunch break with a friend, and the owners inquired about how long it took us to be served. It took between 10 and 15 minutes which the owners say is a little longer than normal, and that they're attempting to shave serving times to under eight minutes. This goal is counter to classic Perisan dining, which Yasha describes as a slower, longer process of dining, discussion, and lounging. They're also in the process of accommodating lengthier stays at the restaurant by adding a Persian café with a full suite of Middle Eastern coffees and teas.

Classic Persian dining is something the Aghdasis know well. Yasha was born in Tehran, Iran and moved to Columbia, Maryland with his family in 1998. His uncle had migrated from Iran to Maryland in 1964, and his aunt moved there after the Iran Hostage crisis in the early 80's. As a teenager, Yasha worked at his father's Persian restaurant and watched him open 18 more locations. His father was a taskmaster.

"I forgot to sanitize a pot, and he said 'take your apron and go home,'" Yasha says. His father's stern approach taught him to do things right the first time. Yasha says he was determined to top his father, and he and a business partner launched gold-buying kiosks in malls. In all, Yasha opened 30 locations in New York, Delaware, Pennsylvania, Maryland, and Virginia. Economic pressures from the recession led to him closing the kiosks one by one. The last locations were in Rochester, and Yasha manned the last days of his last kiosk in Eastview mall near the Apple store. That's when he met Rana.

"She was walking in the mall with a mutual friend and I stopped them," he says. "I asked her if she was Indian. She said no." Today, Yasha can laugh about it. Rana moved to Rochester from Tehran to pursue a graduate degree in Industrial Design at RIT. The two have been attached ever since.