Six women make the scene with a new singer-songwriter movement 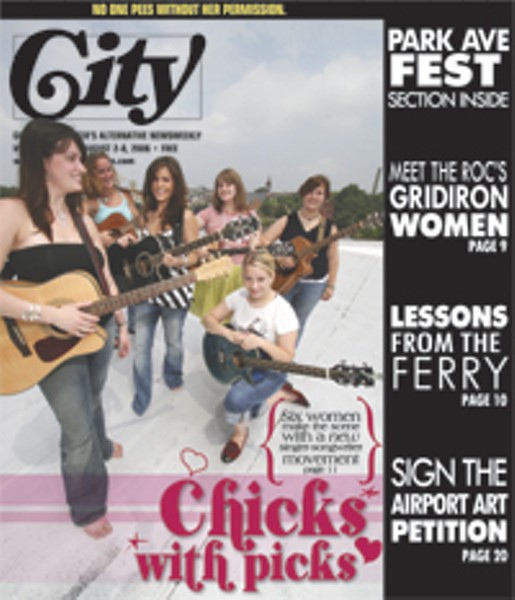 You see a young girl with a guitar perched on a stool on a makeshift stage in a dimly lit coffee house, and you just know what's going to happen next, right? There'll be some left-wing caterwauling, a litany of boy-bashing rhetoric over three or four well-worn guitar chords, and plenty of overwrought passion and urgency.

That isn't to say the supposition doesn't ring true to a certain extent. We've all heard it before. But within all this often-exasperating self-exploration and expression, a few diamonds shine bright in the creative rough; artists with something to say that supersede the stereotypes, draw upon audiences outside the norm, and create credible music. Young women with guitars perched on stools on makeshift stages in dimly lit coffee houses.

In Rochester there are six of them; six young ladies in spite of it all. I'm not sure I know what constitutes a musical movement, or how many artists actually have to make the scene before a genre and its musicians hit radar screens. One?Two?Five?

Six. That oughta be enough for a movement. Yeah, six.

This particular movement is entirely organic. Though frequently sharing the stage together, all of these young artists have come into their own, on their own. They have risen above the various limitations set by others and beyond what people expect from them.

Acoustic guitar and the art of the subconscious zeitgeist

It's that voice. It'll stop you in your tracks. Margaret Storms' dusky alto and smooth delivery belie her 17 years. Her maturity is refreshing as well. Storms is well aware of the obstacles she and other female singer/songwriters face, as well as the importance of what they're all doing.

"I think this sort of thing actually might be a sort of subconscious zeitgeist," she says. "As smart girls rise up against the 'I'm this bimbo and I'm just going to pimp clothing and not think for myself' sort of idea that's in music right now."

Storms writes and plays rock songs. For now it's just her and her Guild acoustic. She plans on fleshing some of her new tunes out in the studio with a band. Still, the songs remain, as does her unconventional guitar chording and song structures.

Her songs take precedence over show biz; Storms simply gets on stage, leans in, and plays. She's been doing it for two and a half years yet she exudes a seasoned confidence afforded through initial stage fright at her first gig at Daily Perks Coffee House. But she got over it.

"There's those people who go 'Oh god, it's another one of those femi-nazi butch dykes,'" she says. "Or you get, 'Oh, it's just another stupid girl with a guitar.'" Both of these theories are shot down quickly once the Margaret Storm begins. Lyrically she straddles the chasm between the girl she was and the woman she is. This gives listeners an intimate peek into her life as it changes romantically, socially, sexually --- listeners including her mom and dad. Do they prefer knowing this info?

This is not a love song

Nora Kaminski is a proficient fiddler. She's been playing the instrument since she was 5. She taught herself guitar a year and a half ago after playing violin with local musician Matt Cross.

"He had all these really cool songs written," Kaminski says. "And I wanted to write songs too. So I taught myself. I looked up chords on the Internet and then I watched people."

Now, even with limited training, the guitar has become her weapon of choice.

Kaminski is a utilitarian player. This works well with her quiet delivery and sarcasm. And this 17-year-old has an opinion or two. She pours out songs about Rush Limbaugh, our nation's dependency on oil, emo boyfriends, and tunes filled with general youthful optimism. Of all the women in this scene, Kaminski is probably the most classic in her left-wing defiance and rebellious leanings. That's not to say she's militant, but the music brings out a more vociferous and profane side to this otherwise shy young lady.

"I don't usually swear all that often," she says. "So it's kinda weird that I do in my songs."

She hits SUNY Fredonia this fall and plans to continue playing. Ultimately she wants to work in music therapy or teach kids with disabilities. She's got pro chops and pro insight, but not necessarily pro aspirations.

"The music business is really terrible," she says. "I really despise money. A lot of people are in it for the money and that's what sucks.

"I work it as a summer job but it's because I love doing it."

And she'll continue writing about anything and everything that happens to and around her.

"I will never write a love song," she says. "Because it's nobody's business what I do with my love life."

"When I play acoustic it's more intimate, and I get to tell stories and it's just a closer thing," Teressa Wilcox says. "And there's more rawness to that." More often than not you'll see Wilcox and her guitar ala carte where nothing --- including her guitar --- gets in the way of her sweet voice. When fronting a full band, Wilcox's sound is pretty, slick and poppy. The songs are still there, there are just more colors to paint with.

"I like all the different elements of pop and rock when it's with a band," she says.

Wilcox has already landed a publishing deal, has management and is working on self-releasing CD No. 2. She has performed and recorded overseas and seems to be giving it the big push. She gigs around Rochestera lot.

Yet within the big star-maker machine is her music; music that is as soft-spoken as she is in person, yet grows in impact and volume as it resonates. As this 23-year-old grows musically, dashes of real life increasingly find their way into her songwriting, although even as a teenager she was writing songs about relationships gone bad.

"How could someone at the age of 13 feel all that stuff?" she says. "I'm writing from real experiences now." Still, some of those teenage experiences were real...and lasting.

"The second song I ever wrote was called 'Dead Silence,'" she says. "And that was my first real song. It was about a kid I had a crush on. We still play that song today."

Not quite what you expected

Teagan Ward first saw Teressa Wilcox sing when she was a freshman at MercyHigh School. At the time Ward was unaware of the powerhouse inside her own lungs. Other than around the house, Ward didn't sing.

Ward's voice is easily twice her size. That's not to say this 19-year-old bellows; it's just not what you expect to come out of such a slight frame. Folks may pre-judge when she walks on stage.

"I don't care," she says. "I like the fact that I'm a girl and people probably don't think much at first. I like stepping on stage and singing and people being blown away to some extent. 'Cause I don't think they expect that out of me." Nobody really expects 10-foot pipes out of a 5-foot-something woman.

Ward's mother, Renee Ward, was a rock musician herself, and played rhythm guitarist and sang lead vocals for the late Split Image. She encouraged her daughter to pick up the guitar.

"I never really got into it," she says. "I wanted to play the drums." Ward went so far as to study percussion at Roberts Wesleyan, but the theory and technical emphasis took the fun out of it.

Her boyfriend at the time showed her a few chords. Not long after she started singing.

It pleases her to be a part of this apparent movement of young female songwriting talent. Just as Wilcox's show at Mercy High encouraged her, she hopes that by playing out, she and the other five will encourage more young women waiting in the wings with a guitar and a song. It's just a matter of time.

"It's gonna be giant soon," she says.

Could've been a contender

"I think playing guitar and songwriting is like God's gift to my hormones," she says.

Nunes has been picking guitar for the last four of her 17 years. Pre-hormones, it was a pretty standard scenario.

"Just normal teen angst that I had," she says. "I was 14; you know, school sucks, so I started writing songs about that. It was an easy way to get it out."

She strums in a quasi-madrigal kind of way, keeping her close to the folk side of things. But lyrically she waxes a lot more urban --- shopping at the dollar store, the quirks of her various friends.

She's currently recording her second CD with The Chesterfield Kings behind the board at their Living Eye Studios. Her eyes are on the horizon. In her drive and optimism she hasn't chosen a safety net and has no idea what she'd do if she weren't playing music.

"Maybe, I'd be a boxer," she suggests. "Take out all my anger there on the punching bag."

I cannot tell a lie

Katy Wright hated the guitar. Well, she liked it actually, but it had already been established as a "boy's instrument."

"I felt like all the boys were playing guitar, and I wanted to stick to my piano," she says. She also hated the clarinet. And she hates the gender limitations associated with certain instruments.

Wright discovered a knack for songwriting her senior year at MarcusWhitmanHigh School in Rushville. She couldn't haul a piano around so she bit the bullet and picked up the dreaded guitar. Her first song wasn't far behind.

With a degree in music, this 23-year-old lives and breathes the stuff. She teaches piano and voice at The House Of Guitars and Northfield Music. Her straight gig as manager at Boulder Coffee finds her booking the acts as well.

But despite her theoretical knowledge of music she still treads lightly. Her guitar playing is somewhat conservative and understated. She's modest about her talent and quick to point out her own limitations. Piano is her main instrument, yet doesn't make it into the current singer/songwriter equation.

"I don't write on piano," she says. "I have to separate classical music from songwriting. I get really nervous when I play piano in front of people and I don't really with guitar. I think it's because people have expectations of me because I'm classically trained."

And Wright is giving it the push as well. She has one self-released CD out, is working on new material, and is sending songs to Nashville.

Though Wright reins it in, her songs still let fly.

"I think I've become, over the years, a pretty raw songwriter," she says. "I used to kind of beat around the bush with my words and try to get the audience to read these subliminal messages. I've grown up enough now to be completely honest. I don't lie in my songs. I don't make things up."

For more information on these artists, check out: