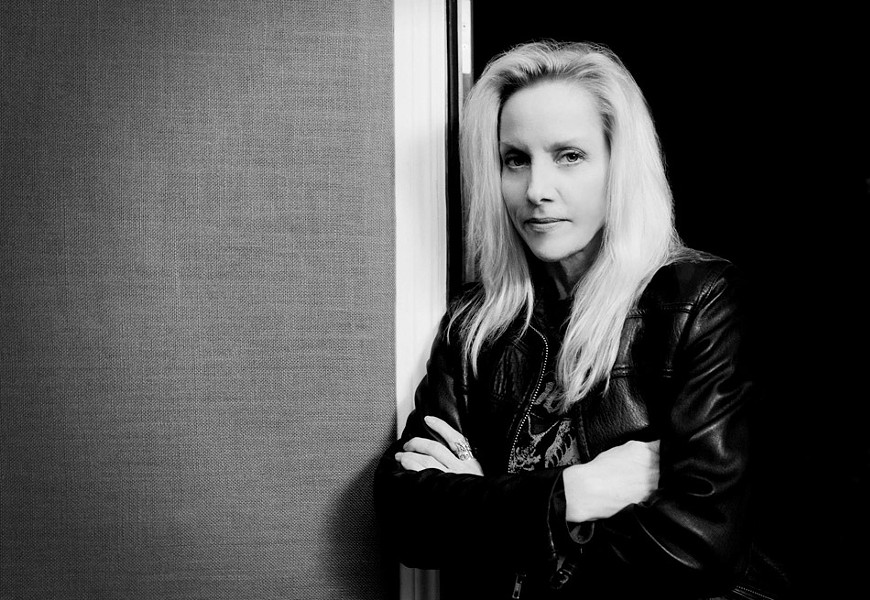 In 1975 an all-teenage-girl band was basically unheard of. Sure, there were female artists kicking around. But for the most part they were plugged into bands with dudes. Enter The Runaways: brash, ballsy, raw, rocking, and all female. The band was formed by drummer Sandy West and guitarist Joan Jett after producer and rock 'n' roll impresario Kim Fowley put them in touch. The band began hitting the Los Angeles club circuit as a power trio with bassist Micki Steele (later of The Bangles). Steele soon split to be replaced by Jackie Fox. With the addition of guitarist Lita Ford and singer Cherie Currie, the band exploded on the scene with its eponymous debut for Mercury Records in 1976. Despite three more releases, and shows in which they shared the stage with acts like The Ramones, Cheap Trick, Tom Petty and the Heartbreakers, and Van Halen, creative differences plagued the band, and The Runaways hung it up for good in 1979.

Look around today and you'll still see remnants of The Runaways. Sadly, West died in 2006, but Lita Ford and Joan Jett are both guitar-slinging household names, Fox is a writer and entertainment lawyer, and Currie...Currie wields a chainsaw. Yup, she's still in rock 'n' roll, but divides her time between performing and creating some gorgeous wood sculptures rendered with a chainsaw. If you want a piece, you'll have to get on a year-plus-long waiting list, as Currie is back in the studio with Fowley (an album is slated for release early next year) and on the road again. She called up to say hi, compared the dangers of rock 'n' roll with using a chainsaw, and to tease us with the possibility of a Runaways reunion. An edited transcript of the conversation follows.

CITY: What's new and exciting in your world?

Cherie Currie: Yesterday was an amazing day in my life. Lita and I did our first professional photo session for the Christmas duet we did, which she wrote. It is coming out next month. It was an absolute joy to spend time with her.

How long had it been?

Well, Lita and I have been seeing a lot of each other lately. She asked me to do this fantastic Christmas single with her called "Rock This Christmas Down." People are gonna love it. Things have just been positive and wonderful. Lita and I have been talking a lot about touring and coming up with a show that the Runaways fans will love, how to incorporate our wonderful drummer Sandy West — God rest her soul — into the show. And we're reaching out to Joan to see if she would like to jump on board and have some fun.

Why the resurgence? What got you back in the game?

I've always continued writing music. After the movie came out [2010's "The Runaways," based on Currie's memoirs], my manager, Kenny Laguna, who was also Joan's manager, asked me to open for her at the Pacific Amphitheater in 2010. It was really a great show. I was offered a record deal that night, and I realized, hey, why not?

How is the music industry different today?

Well, my gosh, it's so easy today, with the internet. You still have to rely on television and radio and journalists. But nowadays you don't even need a record company — you need a distributor — but you can make your own records and you don't need to be under that thumb of the record company.

And women in rock 'n' roll are no longer a novelty.

Of course. That has changed dramatically. When The Runaways were happening we had Heart and Fanny and Suzi Quatro, who really blazed a trail.

So did The Runaways.

Yes, yes we did. We were teenagers. That had never happened. That had not been done. Talk about a crash course; we were out there on the road without any parental supervision and we counted on each other for support. A lot of us had never been away from home.

What's a highlight from that time for you?

I think it was always walking on and walking off stage. As the audience grew for The Runaways we really realized we were doing something extraordinary.

What is a lesson learned that you still apply today?

I certainly don't do drugs and drink anymore. I'm far more cautious than I was back then. And that just comes with life. I'm just not a reckless human being.

No? You carve life-size mermaids out of wood with a chainsaw.

That I do. I was so afraid of that chainsaw that I had to overcome that fear and listen to my intuition, which so many people don't do out of fear. I've never been hurt by the chainsaw, thank god, and I've been doing this now for 12 years.

How did you ever get into chainsaw sculpture?

I just happened to pass some guys on the side of the road on my way to the beach one day. They had a little gallery there and they were carving. I couldn't get it out of my head. At that time I was a two-dimensional carver, carving wall hangings and tabletops. But this voice in my head said I had to go back, you can do this. So I went back and asked if they would let me be their apprentice. And they taught me how to not kill myself with a chainsaw.

Your work is absolutely beautiful.

Thank you so much. My third piece was accepted into the Malibu Art Expo, which is really difficult to get into.

Chainsaw art doesn't scratch a musical itch for me, no. I keep writing and participating in music because it's something that I'm meant to do.

Lita and I are going to do more stuff together. Every day seems to be a surprise.

Well, we've put it out to Joan. Lita and I are going to do something together and we'd really love to have Joan with us because we're just having such a great time doing it.