"Vanya and Sonia and Masha and Spike"

May 13, 2015
Reviewed Saturday, May 9Continues through Sunday, May 31Geva Theatre Center, 75 Woodbury BoulevardTickets start at $25 | Visit gevatheatre.org for specific dates and times

Before contemporary playwright Christopher Durang penned "Vanya and Sonia and Masha and Spike," farcical comedy and Anton Chekhov rarely occupied the same sentence. But "Vanya" — the 2013 Tony Award winner for Best Play — succeeds in comically commandeering names, imagery, and themes from the much anthologized work of the Russian playwright and short-story author, by reintroducing Chekhov's elements into modern slapstick.

The satisfying result — what Durang calls a "comic blender" — can be seen on Geva's Wilson Mainstage through May 31 as the final play of Geva's 2014-15 season. 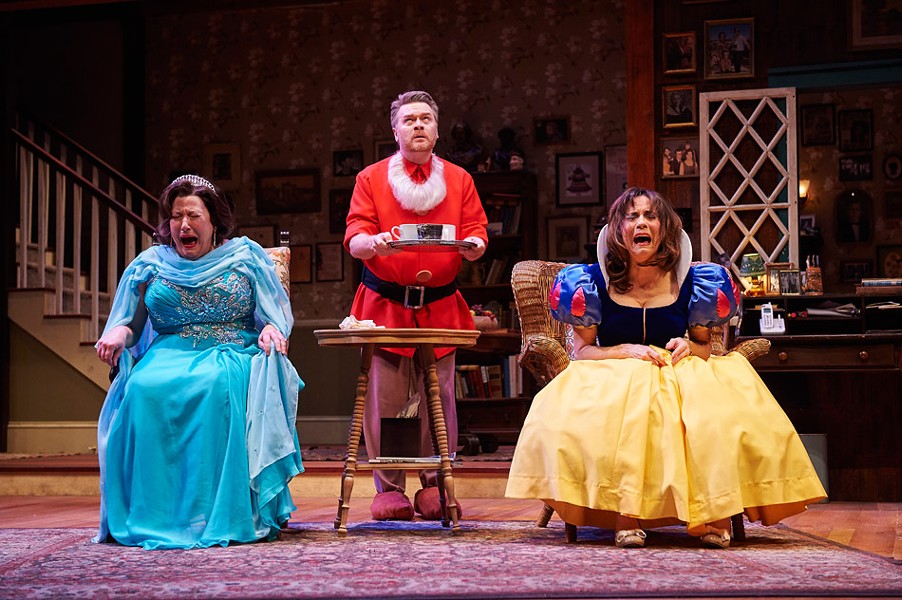 Set at a farmhouse in present day Bucks County, Pennsylvania, middle-aged siblings Vanya (John Scherer) and Sonia (Toni DiBuono) enjoy a morning cup of coffee together. Overlooking a small pond, they laugh, bicker, and reminisce of their parents: theatre loving professors who named their children after beloved Chekhov characters. Neither Vanya nor Sonia are married, but the two coexist like an odd, old couple. "I hope you're not going to make Chekhov references all day," Vanya says to Sonia — it's a subtle, self-aware nod to the audience. Sonia laments that she's accomplished nothing with her life, comparing her boring routines to those of their successful, flamboyant Hollywood actress sister, Masha (Margaret Reed).

Masha surprises Vanya and Sonia with a visit to the farmhouse, bringing along Spike (Gregory Isaac Stone), an idiotic boy-toy half Masha's age who can't seem to keep his clothes on. Mix in a psychic, forewarning housemaid, Cassandra (Danielle Lee Greaves), and a cutsie, young neighbor, Nina (Maren Bush) — who distracts Spike from Masha — and the stage is set for a quirky, ensemble comedy that attempts to outdo itself with every advancing act.

You don't need to know what "Chekhovian" means in order to enjoy this play. You don't even need to Google him. Maybe more important to know are the references to Greek tragedies. On the wall, behind the action, is a poster of "Oresteia" (the trio of ancient Greek tragedies written by Aeschylus, which includes "Agamemnon"). Cassandra, the house maid, is a direct allusion to Cassandra from "Agamemnon." Like the ancient character — who Apollo cursed with visions of the future that no one would believe — Cassandra has premonitions and bellows warnings. The siblings pay no attention, however. "Beware! Beware!" Cassandra yells. Vanya responds: "Can't you just say, 'Good morning'?" These exchanges bring the most memorable laughs, and Danielle Lee Greaves often steals the show.

While it wouldn't hurt to have a little background knowledge of both Chekhov and ancient Greek tragedies, don't let the intellectual foundation fool you: "Vanya" is approachable and light. Its biggest source for laughs come not from rarefied references (those jokes often fall flat), but from everyday themes all can relate to: resentment, generational disconnect, self-image, and aging.

Perhaps most surprising about "Vanya" is how much it looks and feels like a modern TV sitcom. The pacing is quick, the dialogue is sharp and witty, and the stakes only exist to set up laughs. We know that Masha won't push her siblings from their home, and that's okay. Like any sitcom, it's about the ride, about an outrageous attempt to push each character out of his or her comfort zone, only to eventually and inevitably reestablish normality.

Certainly, Television and the evolution of entertainment define this play. TV, Durang claims, is a box that engenders society's shared experiences, though it's changing. As theater was once part of the national consciousness, traditional television, too, is getting left behind. Instead of watching programs in predetermined primetimes, millennials are now mobile — watching TV whenever they want, wherever they want. Durang laments this advancement. He suggests that we're losing entertainment's most valuable aspect: enjoying it together. The point is belabored, however, through a lengthy, out-of-nowhere, preachy monologue that attacks millennials. It blatantly panders to theater's older audiences and could be viewed as Durang's biggest misstep, but it's forgivable. There's enough goodwill in this play to overshadow the heavy-handed soapbox moment.

Both hilarious and heartfelt, irreverent in every direction, "Vanya and Sonia and Masha and Spike" unapologetically reaches for laughs and never quits. How television, Greek tragedies, and Chekhov all relate is still a bit of a mystery, and the thread doesn't always work; however, director Bruce Jordan excels at weaving Durang's tragically slapstick story — ultimately, one about aging siblings struggling to evolve in a world that's busy forgetting them.