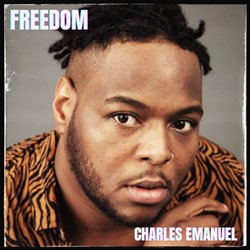 Singer-songwriter Charles Miller Jr. (aka Charles Emanuel) and his soul-infused pop-rock have been a local mainstay since he moved to Rochester from St. Kitts in the Caribbean in 2013. But familiar as fans-in-the-know are with the satin-tongued musician and his previous intimate recordings, 2016’s “The Healing Process” and 2018’s “Breathe,” Emanuel’s star quality feels relatively unsung when compared with the depth of his talent.

Emanuel’s self-produced album, “Freedom,” due on Aug. 12, is the apex where his confident persona and smooth songcraft meet. The result is a seven-song suite of artist-defining R&B and soul that could be his breakthrough work.


Throughout the album, the artist retains the earnestness and generosity of spirit that made his earlier music so appealing. But on “Freedom,” Emanuel turns to heavy hip-hop beats and rich cameos from Rochester-area musicians to enrich the sonic landscape. Judah Sealy’s smooth-jazz saxophone punctuates the palpable heartache of the opening track “Let You Go.” Additional vocals from Taurus Savant help to turn up the heat with the romantic entreaty “Love on Fire.”

Channeling Stevie Wonder, Emanuel’s sultry vocal performance on “Back2Me” makes the song a gem. But the upbeat, ’90s-esque dance tune was a team effort, co-written by Savant and Avis Reese, a primary collaborator of Danielle Ponder.


The title track is an ode to personal empowerment and self-affirmation, with the music relying on the album’s recurring combination of melismatic R&B melodies and bass-heavy hip-hop rhythms.

Another standout on the album is “Every Shade of Blue,” a stunning duet with Cammy Enaharo in which a couple affirms their love for one another in hard times: “I know what you’ve been through/ Your every shade of blue.” This acoustic guitar-driven song is a stylistic anomaly of the album, but it’s not surprising considering Emanuel shares songwriting credits with Enaharo, and production credits with both Enaharo and Ben Morey.


The album ends with the sunny “All My Love,” as Emanuel uses reggae-inflected vocals to celebrate a blossoming relationship with a declaration of devotion.

“Freedom” has the feeling of an artist who’s come out of his shell. The album is full of danceable, extroverted music that serves as an ideal vehicle for Emanuel’s positive outpourings of love — both for himself and for others.

Charles Emanuel performs at the album release show for "Freedom" on Friday, Aug. 12, at 8 p.m., at 215 Tremont St. For more info, go to eventbrite.com and facebook.com/CharlesEmanuelMusic.