"Jamey's choreography is the actual piece of art twice removed now," Tyzik says, adding that (at the time he talked with City) he hadn't yet seen what she has created. "Jamey creates in the studio with her dancers around her. It's something I'm not a part of and don't need to be a part of. I would never step in her way of interpreting my art. Based on working with her in the past, I don't expect anything less than magnificent." 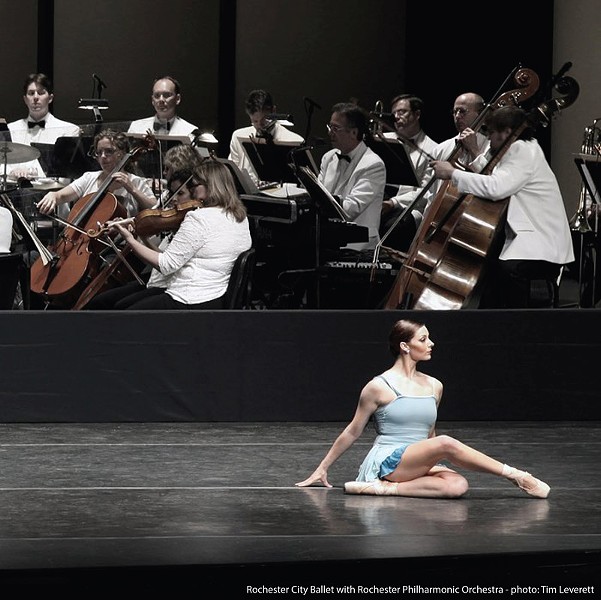 Within the last eight years, Leverett has created dance pieces for two other Tyzik compositions: "Bravo Colorado" and "New York Cityscape." At approximately 45 minutes in length, "Images" will be the longest work she has choreographed to his music.

"The music is always the roadmap for the dance," Leverett says. "I feel fortunate that Jeff has entrusted me to create a visual to his music."

Leverett has been both artistic director of RCB and artistic director of Draper Center for Dance Education — the company's feeder school — for 12 years, but just recently, she announced her plans to step down from her RCB position. During her time leading the company, it developed from a student company with seven dancers, to a professional organization with 14 dancers on contract. Ninety-five percent of what the company has performed was her choreography, Leverett says. Next, she hopes to grow as an artist by experimenting outside of Rochester. She will remain artistic director for the school.

Tyzik says he believes their collaborations aren't over. "I have a feeling we'll be doing something else again in the future."

"Images" was commissioned by Memorial Art Gallery patrons Bob and Joanne Gianniny to commemorate the 100th anniversary of the gallery in 2013. Tyzik's suite is 45 minutes long, and each of the movements is subtitled based on its individual artwork. Tyzik and Leverett each spent time in the gallery recently exploring the way in which each of the seven pieces of art affected them before they actually began creating themselves.

The piece "Dr. Caligari" (1984) by local and internationally renowned artist Wendell Castle is one of the artworks selected by Tyzik. Inspired by the German Expressionist horror film "The Cabinet of Dr. Caligari," this angular clock reminiscent of a rocket is among a series of 13 clocks Castle made in the 1980's — visual metaphors suggesting the concept of time. Tyzik says there is a direct correlation between the clock and his music.

"The idea of that piece is a time continuum so I used a steady underlying pulse but I experiment with different rhythms working against each other," he says.

Both Tyzik and Leverett agree that the different sections of their creations vary widely.

The sculpture "Memory" (1914), by William Ordway Partridge, is of a mother holding a child, powerful in its simplicity. Tyzik says he was thinking of his daughter and his granddaughter when he composed this movement for solo violin and solo oboe; the violin represents the voice of the mother, and the oboe the voice of the child. In turn, Leverett choreographed a minimalistic piece with her son in mind.

Contrast the tenderness of that music and dance with the celebratory feel of the section based on "Summer Street Scene in Harlem" (1948) by Jacob Lawrence. The painting is full of action, energy, and bright colors. Tyzik wrote his composition in the Duke Ellington style of the 1940's to capture the essence of the painting.

The concert takes place Friday, May 8, and Saturday, May 9, in Kodak Hall at Eastman Theatre, and also includes two more Tyzik compositions: "Call to Worship" from "Pleasant Valley Suite," and "Traffic Jammin" from "New York Cityscapes." John William's overture to "The Cowboys," and Aaron Copland's "An Outdoor Overture" and "Fanfare for the Common Man" round out the pops program. Photography projections of the Rochester Camera Club will accompany the performance.