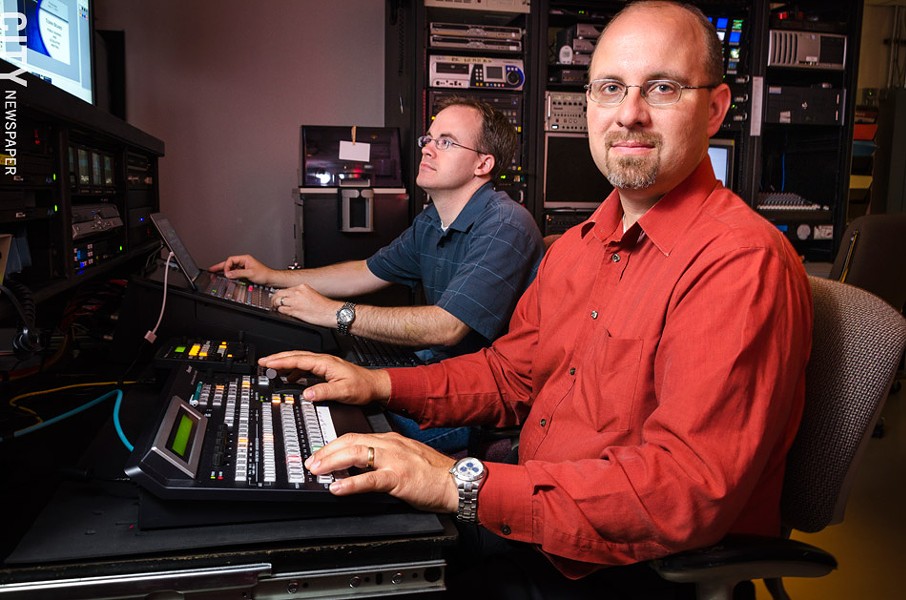 Time Warner Cable is not taking away PBS.

Earlier this month, the cable company informed its Western New York subscribers via a letter that it's changing how it carries public, educational, and government access television stations. These aren't public stations in the PBS sense, even though some subscribers clearly believe they are. They're better known as the local cable access channels 4, 12, and 15.

The company is not eliminating the channels. Rather, on July 23, Tim Warner will stop transmitting the channels as an analog signal and will begin transmitting them digitally — a change it's implementing across the state and New England. As a result, some subscribers will have to take extra steps to continue receiving their cable access stations.

But directors of local cable access channels are concerned. They say the quick changeover could create confusion or give people the impression the channels have been switched off.

"How's it impact us? It's kind of a nightmare," says David Renner, television coordinator for Penfield.

In Monroe County, the active stations are concentrated in the east-side communities and the City of Rochester. While state law says cable providers have to make the access channels available, communities don't have to use them.

How the transition impacts different households will depend on the cable package the households subscribe to and whether they have a set-top box. It also depends on whether a subscriber's television is a digital or analog set.

Here are the three scenarios:

• Subscribers with Time Warner-issued set-top boxes and DVR's will see no change and the stations will remain at channels 4, 12, and 15. They don't have to do anything to keep the channels.

• Subscribers who have a digital television and plug their cables directly into the TV will have to rescan the stations. On these televisions, the community access channels will move to 98.3, 98.4, and 98.5.

• Subscribers with analog televisions who plug the cable directly into their sets will need a converter box from Time Warner. The company is distributing the boxes free on a first-come-first-served basis, and subscribers can get them online, at the company's service centers, or by calling (855) 286-1736. Beginning in 2015, the company will charge 99 cents per month to use the converters.

Time Warner spokesperson Joli Plucknette-Farmen plays down the potential for complications from the switch. The company gave its subscribers 30 days' notice, she says, and has developed a website — twc.com/digitaladapter — to explain what's happening and what customers need to do to keep the access channels.

"It should be relatively seamless," she says.

And about 75 percent of the company's cable TV customers in the area won't be affected because they subscribe to digital packages, Plucknette-Farmen says. She says the company doesn't know how many subscribers have analog televisions without a set-top tuner.

The company says that capacity freed up through the conversion can be used to provide higher-speed Internet or more on-demand programming.

Penfield Community Television's Renner says that, in the long term, the changes could provide opportunities for the station to improve the video and audio quality of its broadcasts. He says that after the transition, he wants to find out whether the station could eventually broadcast in a widescreen format and whether it could use stereo sound, among other issues.

Renner says he's also interested in knowing whether Time Warner will make the cable access channels or their programming available through the company's mobile apps.

For now, however, the stations operators say they're worried about the impact of the transition.

The channels fill an important niche. They provide residents with information, events coverage, and locally-oriented programming not available anywhere else.

In Penfield, channel 12 broadcasts all town meetings. Supervisor Tony LaFountain says that residents often catch the meetings, or parts of them, on the channel and ask him about them later. He says that town officials have tried to operate Penfield's government as openly as possible. And Time Warner's plan to move the channels, without allowing time for significant public awareness campaigns, may undermine some of those efforts, he says.

LaFountain says he's disappointed by Time Warner's approach to the switch. The company should help town officials inform residents about the change, he says.

Each year, the station also records the Sing-Out musical revue, which is performed at East Rochester High School, but features students from across the county.

Time Warner had cautioned local community access channels about the pending shift, Schroth says, but the company never said when it would happen. He says he would have preferred a few months' notice instead of the few weeks the East Rochester Community Television received.

Schroth says he's especially worried about East Rochester's older, fixed-income residents who are the subscribers most likely to have analog television sets. He says he suspects that those residents are most likely subscribing to basic cable and not using a set-top box. They could unwittingly lose access to valuable information, he says.

Carvin Eison, station manager for Rochester's RCTV-15, echoes Schroth's concerns. And he says that older residents may not be comfortable with hooking up the converter.