Casey reviews PUSH and "As the Dead Prey Upon Us"

PUSH Physical Theatre, the creation of Rochester-based husband and wife team Darren and Heather Stevenson, bills itself as "physical theater," but it is really so much more. Darren's spot-on humor is imbued with philosophical depth and the pieces the company performed at the Rochester Fringe Festival on Saturday moved the audience from hilarity to awe. 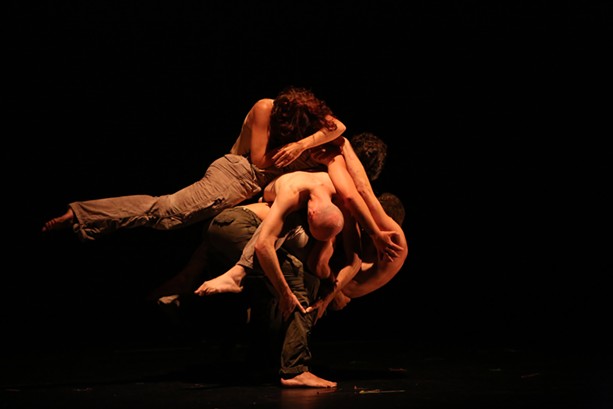 The woman next to me was dabbing at her eyes and sniffling during his solo piece, "Chair," which addresses pursuit of a higher power as a guiding force in life. This, after Darren prefaced the piece with a tongue-in-cheek soliloquy about his preacher father and his own bad boy rebellious attitude, and asked how many Christians were in the audience, going so far as to say that while he himself wasn't gay, he had a British accent which was (sin) enough in most of the Bible belt.

In "The Chair," an older piece from PUSH's repertoire, Darren initially used a foldout chair -- his metaphor for a safe place -- as support, pushing against it to support his weight as he maneuvered his body up into the air, legs parallel to the floor. Next, he sat in the chair, rising as if sensing some presence. Soon he was walking in place in the mesmerizing slow-motion action at which PUSH excels, and reaching for something, one arm extended upwards, his motions sharper, more intent.

Darren's movements signified struggle, search. Eventually, he is running in place, the one arm still raised, the other extended towards some unknown force. The piece ended with discovery -- perhaps redemption -- replacing his yearning. The work could be interpreted in many ways and cuts to the quick about what guides a person, what leads his life choices.

Equally compelling was the sneak peek PUSH gave the audience from its upcoming full-length production "Jekyll and Hyde." The preview was tantalizing. Darren crouched and stretched in agony like a werewolf under a full moon while the poignant strands of "Ava Maria" resonated around him. Company members repeatedly came together, creating multibody formations before breaking apart to move independently.

Dancer Katherine Marino hit a string of balletic choreography just right, executing arabesques and small jetes with innocent precision until Hyde (Jonathan Lowery) emerges from the core of interconnected bodies to stab her, the projection screen flowing with a red viscous substance. The full work will be presented at Blackfriars Theatre on January 29 through February 14. I can't wait.

Slideshow PUSH at the Fringe 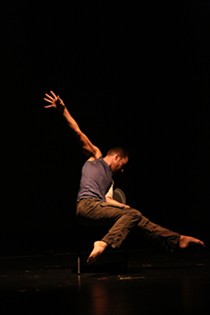 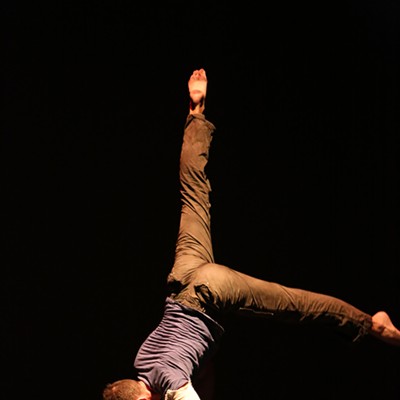 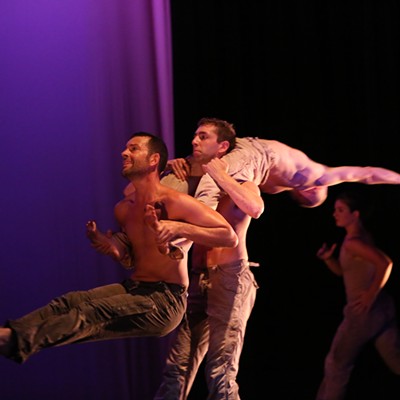 Veteran actor and dancer Richard Haisma also describes his show, "As the Dead Prey Upon Us," as "physical theater," -- more specifically, "The poetry of Charles Olson performed as physical theater by Richard Haisma." Olson was a mid-century American poet who was considered a primary influence on many postmodern writers. According to Haisma, the performance is neither a poetry recital nor a dance to poetry, but a way of propagating the experience of each poem through use of breath and body -- a tenet of Olson's poetic philosophy as well.

"The body may re-inform, color, and amplify the poem in its power, resonance, and impact," Haisma said.

This is in keeping with Haisma's philosophy of dance that one perception must immediately and directly lead to a further perception. It is also an underlying principle of Laban Movement Analysis, initiated by Rudolf Laban, of which Haisma is a Certified Movement Analyst.

I wasn't sure what to expect of the performance. It turned out to be more spoken word than movement -- certainly not dancing. The words did seem to flow viscerally through Haisma and he incorporated audible breathing that almost visually resonated through his body along with his movements: changes of body level, hand gestures, facial expressions. And, yes, his voice and movements gave fresh life to the poetry of Olson. I had read some of the poet's work prior to attending the Saturday evening show, but Haisma's interpretation definitely hit me on a deeper and more kinetic level.

Haisma is an obviously brilliant man with great talent in speaking and a plethora of academic knowledge. And he knows Olson inside and out. Not once during the hour-long performance did he stumble over the lines of poetry he recited from memory. While it was, at times, difficult to absorb all the information he was relaying, it was easy to allow him to carry you deep into the words of Olson. This show is not for everyone, but if you are a lover of poetry or even words, if you are a believer in the transformative power of art, you should attend.