Caroline Vreeland’s an open book, and it ain’t the Bible

March 04, 2020
Caroline Vreeland is the great-granddaughter of Diana Vreeland, formerly the lofty columnist and editor of the fashion magazines Harper’s Bazaar and Vogue. It’s a connection that has led Caroline Vreeland to walk the runways herself, and even design a lingerie collection for Kiki de Montparnasse. Thongs with a wine-glass motif, that sort of thing. 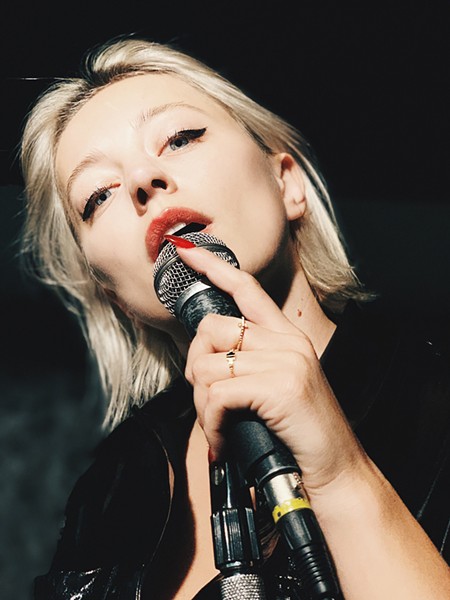 While sipping your wine and browsing the internet, you can see that she has been an actor. Her role in the movie “Children of Moloch,” also known as “Red Handed,” didn’t register beyond the child-sacrifice thriller audience, but her recurring role on the Fox network show “Star” was a bit more visible. Vreeland has a big internet presence — in the media biz we call them “influencers” — where she discusses her breast size with fashion bloggers and describes herself as a vegetarian and “sexually fluid.” She writes a sex-advice column, “Going to Bed with Caroline Vreeland.”

But, “Now you Google me and it says ‘singer,’” Vreeland says.

Indeed. Vreeland recently released her debut album, “Notes on Sex and Wine.” A short tour brings her to Rochester for an 8 p.m. show on Friday, March 6 at Three Heads Brewing. She’s been touring with two bands from Rochester. One of them, KOPPS, is high-energy dance-club rock, although it won’t be at the Rochester show. The second band, Roses and Revolutions — which will play at Three Heads — is the synth-throbbing, indie singer-songwriter pop duo of Alyssa Coco and Matt Merritt.

As we were talking last week, Vreeland hadn’t even met KOPPS. The relationship was at what she calls the “flirting on the internet” stage. Vreeland’s Rochester connection actually comes through Roses and Revolutions. They share the same producer in Tampa. Vreeland was poking around in his studio wine cellar and picked out a good but not too expensive bottle.

Upstairs, she found Coco and Merritt in the studio. “So we poured the wine,” Vreeland says. “We just started playing ‘Dreams’ by Fleetwood Mac. And she and I were just riffing off each other, switching off the verses, harmonizing on the chorus, without even discussing who was going to take which part. It just flowed.”

Lingerie and sex advice aside, Vreeland says all she ever really wanted to do was sing. Born 32 years ago in Washington, D.C., she was Caroline Olivia Zickerick. Her father was a German diplomat and the family spent time in Jamaica. Caroline’s parents divorced, and she and her mother moved to the San Francisco Bay area. At 8 years old, Caroline began working with a vocal coach. After 10 years of that, she decided, “I need to get out of this small town as quickly as I can and get my life started.” Los Angeles. A career in music.

Vreeland was just another singer working as a waitress and bartender. But she had a card to play. Her friends said, “Caroline, why don’t you glom onto the Vreeland empire?”

“I didn’t want that to be my story, I wanted to carve my own path,” she says. “And they were like, ‘Listen, this is not something to go away from. Like, we need to use this in our favor. And if this can benefit your music, then you should be more open to it.’”

That’s when Caroline Olivia Zickerick became Caroline Vreeland. And the modeling jobs started coming in. “I started to be seen as a little bit of a fashion girl,” she says. Vreeland didn’t need to bartend anymore.

“All of it was so that I could promote the music. And finally now, over the last two years writing the record, I’ve been able to funnel all that money and all that time and effort into what I love.”

“I really wanted to show this, like, giving in to the intoxication of the self,” she says. “And like maybe kind of reveling in that darkness. When I wrote the album I was obviously going through a bad relationship, coming out of that, and I was not in a great place. I was drinking a lot, and that was just kind of my way of coping.”

Out of those tough times came the album’s first single, “Stay Drunk with Me.” And the accompanying video, set in a mansion amid a party of excess. If the new album has a theme, that’s pretty much it.

“It is kind of at the heart and soul of it because it has that bacchanal vibe,” Vreeland says. “And I think Bacchus is, don’t know what he is actually, but I’m trying to figure out: Is he my lover, is he my father, is he my brother? What is he to me? Because I haven’t had a healthy relationship with men at all. So he kind of represents all of the men in my life, and then I just indulge; obviously he is the god of sacrifice and wine and all that. So I guess you could say ‘Stay Drunk with Me’ is the crux of the whole project.”