Can't local Democrats be faithful to their ideals?

November 28, 2017
Just what is a Democrat? As its candidate for sheriff, the Monroe County Democratic Committee chose Todd Baxter, a conservative, Republican-turned-Democrat. Baxter defeated Republican incumbent Patrick O'Flynn. But some Democrats were outraged by the selection of Baxter, and one of them, Gary Pudup, ran a write-in campaign and has continued to speak out. In this guest commentary, he explains his views. (Mary Anna Towler's Urban Journal returns next week.)

Congratulations to the Democrats nationwide for making a statement on November 7 rebuking the policies of President Trump. The election of a transgender candidate, an outspoken gun-control candidate, and two governors are a ray of light on the edge of darkness. 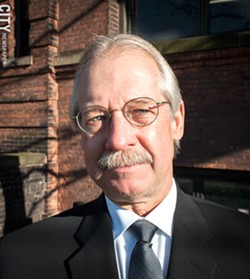 Likewise, here in the home of Frederick Douglass and Susan B. Anthony, progressive Democrats are celebrating the election of candidates in Henrietta and Pittsford, and of progress against the Republican juggernaut in Greece. The County Legislature is also one shade closer to blue. Yet there was a choice by local party leaders that raised concerns about what it means to be a Democrat.

Democrats everywhere are struggling to define themselves, seemingly unable to come up with anything better than being the “Better Deal.” They have yet to articulate a description of what it means to be a Democrat. Simply being against something is not a sustainable platform. Yet stymied in their quest to be all things to all people, they are in danger of becoming nothing to everyone.

It has been said that there is no litmus test to define what it means to be a Democrat. The Greatest Generation, however, was led by Democrats who held onto power not only by being against Japanese imperialism and Nazi fascism, but also by being unwavering in their support of the Four Freedoms of FDR. The belief in the Four Freedoms of speech, of worship, from want, and from fear was the glue that held the Democrats and the nation together.

Eleanor Roosevelt expanded the Democratic platform to include the Four Basic Rights: the rights of equal education, of equal pay, to justice under the law, and to full access to the ballot. Everyone knew what it meant to be a Democrat.

There must be more to winning than simply rebuking Mr. Trump. Winning should move our shared values forward. Good people must agree at some point on a basic set of ideals, that no one should go bankrupt paying for health care for a spouse or child, that women should not have to constantly refight the battle for comprehensive health care, that immigrants should be celebrated and refugees welcome, that organized labor has done more for the well-being of the middle class than any tax break for the wealthy, that more guns are not the answer to gun violence, that every person has worth and dignity and something to offer to our greater good, that government is not evil but a force for good, promoting the general welfare.

These are not litmus tests but shared values that push us beyond supporting a candidate merely for the sake of winning.

It is the responsibility of an organization’s leadership to establish a vision and clarify ideals. The local leadership did neither in putting a self-described “conservative who is a Democrat” at the top of its ticket. We need to stop and reflect on what it truly means to be a Democrat. Which is more important, our values or bragging rights?

The New Deal, the Great Society, and the fight for Civil Rights, Gay Rights, and Women’s Rights are part of the proud tradition of the Democratic Party.

Are we willing to be faithful to our ideals as the descendants of Douglass and Anthony and stand fast? Or will we be bystanders to history as we run anyone we think can win? Anthony would never live to see the day women were enfranchised, yet she persisted. So should we.

Democrats scoffed at White House Chief of Staff John Kelly for saying there should have been a compromise on the issue of slavery to avoid secession. Perhaps this is the test for Democrats today. The question we should be asking ourselves is: How much of our tradition are we willing to compromise to win one local seat?