Can you crowdsource prosthetic limbs? Yes, you can.

The story of a South African carpenter who accidentally sawed off most of his fingers inspired Jon Schull, a research scientist at Rochester Institute of Technology. But it wasn't the accident; it was what came after.

Over the Internet, the carpenter was able to connect with an American prop maker to create a 3D-printed prosthetic hand to replace his damaged limb.

Moved by the story, Schull created an online community of 3D printing enthusiasts, including engineers, students, teachers, researchers, and inventors. Together they've been able to reduce costs and streamline production and distribution of prosthetic hands to people around the world.

And they may have also upended the economics of light manufacturing in the process.

The market for prosthetic limbs is significant and evolving. For example, about one in 1,200 children born every year has underdeveloped fingers and limbs, often a result of amniotic band syndrome.

In these cases, the fetus becomes entangled in fibrous strings in the womb. It's not uncommon for many of these children to require amputations shortly after birth.

And work-related accidents claim thousands of fingers and limbs annually, especially in developing countries. In this country, many veterans returning from the wars in Iraq and Afghanistan require prosthetic limbs.

"The prosthetics industry typically sells the prosthetic hand for anywhere between $10,000 and $50,000," Schull says. "For children in particular, that makes absolutely no sense at all because they're going to outgrow it in a year."

Schull tried orchestrating a big effort with multiple colleges, students, and researchers to work together on prosthetics. When that didn't work, he went back to the YouTube video of the South African carpenter. 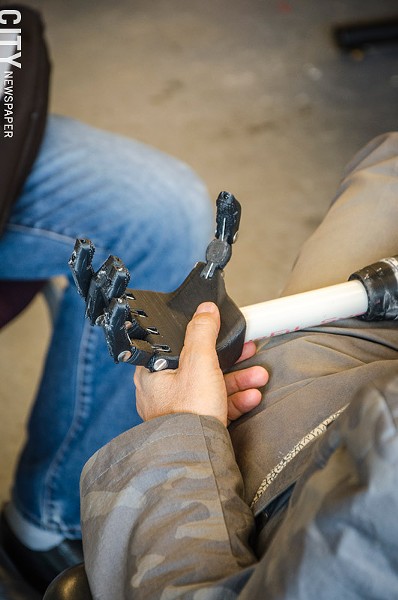 "I noticed several people commented saying things like, 'This is really cool,' and 'I have a 3D printer,' and 'I would do this,'" Schull says. "So I did something really quite simple; I added my own comment and I said, 'If you have a 3D printer and you're willing to make hands for people who need them, put yourself on this map.'"

Schull created a Google Map so people could communicate and share expertise. Within six weeks, a Google community of 70 people that Schull named e-NABLE had been created.

A year later, e-NABLE has nearly 1,000 members, and the website, www.enablingthefuture.org, has become a virtual business startup. The site does not sell prosthetics. Instead it empowers people on five continents to work together on everything from production and distribution to research and development.

That includes Schull and his team of students at RIT's Center for Media, Arts, Games, Interaction, and Creativity. But parents and teachers have used the site to create hands, too.

Finding 3D printers is getting easier, Schull says, and it's not unusual to find elementary students making prosthetic hands as a science project.

While RIT has several 3D printers, the printer in Schull's lab is used only for prosthetic hands. The printer, which looks a little like a barebones microwave oven, sits in a room with bits of plastic tubing strewn everywhere. Plastic string resembling the painted plastic cord used in boondoggle is fed into a printer programed to create a specific form.

"You end up with a 3D object with a bunch of material that needs to be chipped away to get what you want," Schull says. That can be a piece — a knuckle, for example — or the whole device.

The prosthetic hands that RIT's MAGIC lab and other e-NABLE members produce resemble a mix of puppetry and Legos. The prosthetic hands fit over the wrist. Strings go through the device and are attached to the digits, which are activated by wrist movements. The toy-like playfulness of the designs is what makes the devices so intriguing, particularly to children.

There's no attempt to make the units resemble the more human-like commercial prosthetics on the market. Still, they're surprisingly functional and adaptable.

Most importantly, Schull says, is that they can usually be produced for less than $200 in materials.

RIT is focused on creating and perfecting hands for now, Schull says, but is beginning to work on other limbs, too.

"Hands are a good place to begin because legs can break and you can fall and really hurt yourself," he says. "If your prosthetic hand fails, you drop something."

But what has really excited Schull is the way an online community can inspire scientific innovation and creativity.

Schull says the commercial world of prosthetics and the virtual do-it-yourself world are creeping toward each other. And the impact on certain areas of manufacturing will be profound, he says.

"I can't say it has happened yet," Schull says. "But I think we're about to disrupt the industry."