CABLE Act took a page from GOP playbooks in other states

A failed push last week by Monroe County Republican legislators to curtail the power of the incoming Democratic county executive resembled a strategy used by Republicans in statehouses across the country.

Last year, after a Democrat unseated Wisconsin's Republican governor to end eight years of one-party control in state government, Republican lawmakers there pushed through a sweeping set of bills to undermine the new governor before he took office.

One bill stripped him of control of the majority of appointments on an economic development board. Another blocked him from keeping a campaign promise to withdraw the state from a lawsuit challenging the Affordable Care Act. A third prevented him from banning guns in the Wisconsin Capitol.

At the same time, Republican state legislators in Michigan passed a bill that gave them more clout to intervene in litigation involving the state after a Democrat won the race for attorney general. They also stripped the newly-elected Democratic secretary of state of her role of overseeing campaign finance.

Last-ditch efforts like these, in which Republican lawmakers who hold the majority in their legislatures try to weaken the powers of Democrats ascending to offices of authority, were pioneered in North Carolina in 2016.

There, after a Democrat was elected governor over the Republican incumbent, Republicans in the General Assembly passed sweeping restrictions on the office's power.

Among other things, they expanded the state elections board and split it evenly between Democrats and Republicans so the new governor could not appoint a Democratic majority, slashed the number of employees who served at the governor's pleasure, and limited the governor's authority to select members of numerous state boards.

"It's not new in the sense that it's about power and maintaining absolute power. But it's always sort of been distasteful," said Allison Riggs, a senior attorney at the Southern Coalition for Social Justice in North Carolina.

"I think what we've seen a lot of, though," she went on, "particularly at the state level in recent years, is fewer qualms about overstepping the boundaries of legislative power."

Republican legislators in Monroe County, who retained a majority by one seat in an election that saw the first Democrat elected county executive in over 30 years, proposed the so-called CABLE Act of 2019 a week after voters went to the polls.

An acronym for "Checks and Balances for Legislative Equality," the CABLE Act would have, among other things, amended the county charter to give the legislature the authority to approve all of the county executive's choices for department heads.

The legislature already had the authority to confirm the heads of many departments, but the legislation expanded the list to every department as well as to deputy county executives, records management officers, and the county lawyer.

The public reacted with fury, as it did in other states where these tactics were employed, accusing the Republicans of trying to undo the election they had just lost.

And the Republican legislators, like their counterparts in the statehouses, defended the hastily introduced legislation as a necessary check on executive power.

"This is not a power grab," the president of the Monroe County Legislature, Joseph Carbone, told reporters. "This is just one more level of transparency. . . . The people kept us in the majority. We can't lose our teeth. We have to have some power to govern."

Riggs said such rationale is unconvincing, in part because it leaves open the question of why such checks were not already in place.

"People ask, 'Why are you doing this now?' If the answer is because the governor or the executive switched parties, that's a little suspicious," Riggs said.

Further infuriating critics in Monroe County was the way the legislation was introduced. 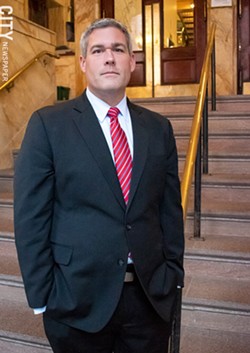 The CABLE Act was added to the agenda of the second-to-last-meeting of the legislative session at the last minute as a so-called "matter of urgency," meaning it could bypass the typical committee process - and thus skirt additional public debate - and be voted on at the following session. Introducing legislation in this manner is a privilege granted only to the majority.

Unlike their counterparts elsewhere, however, the Republican legislators here relented. On Friday, three days after introducing the bill, Carbone withdrew the bill in a memo to the legislature's clerk, citing it as "a distraction from many other important issues."

In backpedaling, though, Carbone indicated the bill, or some provisions of it, would surface again next year, when the majority could work with the Democratic county executive, Adam Bello.

Had the legislation been rammed through and signed by the outgoing Republican county executive, Cheryl Dinolfo, it would have likely faced a legal challenge, as did the bills in other states.

The legislature's majority leader, Brian Marianetti, acknowledged that the CABLE Act would have been subject to a permissive referendum under state law, meaning the public could have forced a yea-or-nay vote on the bill by collecting enough signatures.

Indeed, courts have ruled that much of the legislation enacted in North Carolina violated the state constitution.

Last month, Wisconsin Supreme Court, the state's highest court, heard arguments on the laws there. In doing so, the court lifted a temporary injunction on the laws issued by a lower court. A decision has yet to be rendered.

In an earlier, related case, the high court upheld the manner in which the lame-duck laws were hatched. To pass the measures, Wisconsin legislators held "an extraordinary session," in which they gathered at the Capitol when they were not scheduled to be there.

The Monroe County Legislature isn't the only Republican-controlled branch of local government to employ tactics used by Republicans at the state level.

The Republican-dominated board of supervisors in Arizona's Maricopa County recently changed the way the county hosts elections by adding a second elections director who reports to the board. The original director reported to the county recorder, a newly-elected Democrat.

"If we start normalizing this behavior where state legislatures believe they're the most important branch of government and all of the other branches are free for their picking, you're going to see it at other levels," Riggs said. "It's an ethos and a culture that tends to start at the state level, but it spreads."