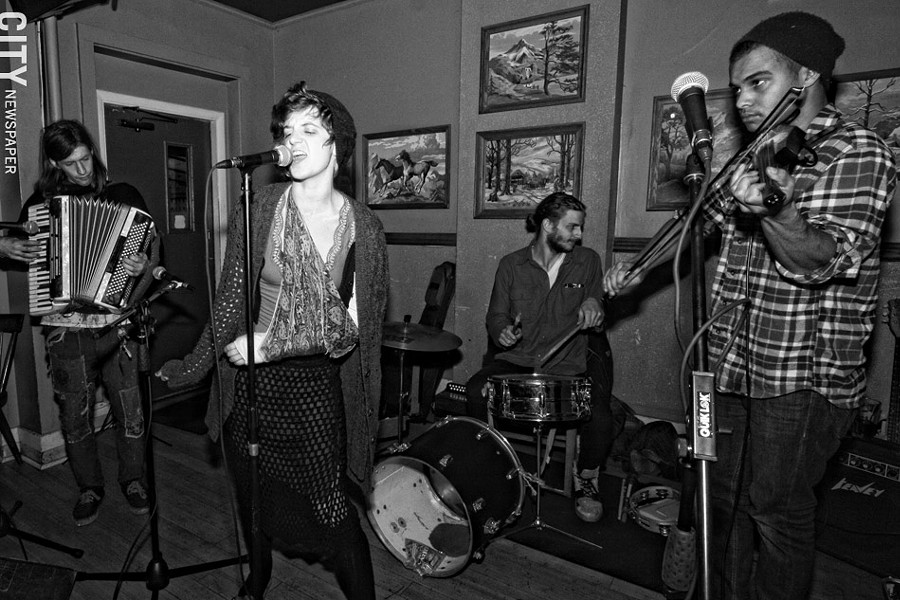 PHOTO BY FRANK DE BLASE Local band The Pickpockets got its start busking at the Public Market. Although it has gone on to play actual concerts, its members continue to play for change on Saturday mornings.
W/Catl and Jenna GiulianiThursday, December 6Bug Jar, 219 Monroe Ave.8:30 p.m. | $7-$9 | bugjar.com http://thosepickpockets.bandcamp.com/

The Pickpockets is a beautifully rag-tag busker outfit straight out of Tin Pan Alley, boasting a faded sepia romanticism and nostalgic charm. The instrumentation is stark yet achingly beautiful. It's the blues of hobos riding the rails, the sound of dwindling optimism and migration found in the Dust Bowl during the Great Depression. Though it might seem somewhat out of place and out of time, this 21st century Rochester outfit sees a connection.

"I think we kind of sympathize with that era with our own financial endeavors," says drummer John Lake. That's probably why they became pickpockets in the first place.

The band calls what it does "Speakeasy Top 40," and blames its antiquity and affinity for vintage on its instruments.

"It kind of happened naturally," says violinist/guitarist Phillip Herford. "Playing in the street with an accordion and a violin, that sound is going to kind of take control."

"It's what the instruments do naturally," Lake adds.

The Pickpockets first hit the scene a little over a year ago, playing at the Rochester Public Market "for gas money and sandwich money," according to Lake. The band was invited to perform at indie performance space The Yards, and it was suggested that the boys invite singer Shannon Scally to tag along and fill the vacant vocal slot. It all clicked. The bare-boned accordion of Joel Dow, Herford's fiddle and guitar, along with Lake's junkyard-with-a-pulse drums percolated splendidly beneath Scally's torchy warble and coo.

The quartet first tackled period standards like "Minnie the Moocher" and "Sixteen Tons." "Joel knew a lot of old tunes," says Herford. "So it was a good starting point for us. We played some old tunes from the 20's and 30's; the Prohibition era. Then Shannon brought some of her originals."

As the band do-si-do'd, transitioning in order to take ownership of its sound, it couldn't shed its busker roots. The savvy step-right-up bravado remained. The street corner was in the band's blood, even when it played indoors.

"Playing on the street you have to connect with the people going by," says Lake. "You have to be enjoyable." It also requires a grab bag of different approaches.

"We're probably three or four different bands," Herford says. "When we play galleries or house shows where there's a lack of room to dance, we have a very acoustic storyteller sound. When we play a bigger venue like The Bug Jar we play much louder and faster."

The band flies in the dynamic dust found floating between its already minimalist strain, something Dow and Herford picked up in the noise scene while in the instrumental combo Pegacide. "Particularly atmosphere," says Dow. "I think we've gotten an understanding of that in the noise scene. I think this is a refreshing break entirely at the other side of the spectrum. Instead if hiding behind a bunch of weird electronic equipment — like me and Phil have done for a long time — I'm playing instruments I don't completely know how to play. It's kind of like jumping in the water and then learning how to swim.

The Pickpockets captivate when performing live. The intensity builds rapidly as the band adheres to setting the hook quick, a trick learned from its tenure on the street. There's no bottom end to speak of, except for the emotional depths plumbed by Scally, who dances like a demon coquette, switching off from an undulating slither to a seething stomp as she slowly succumbs to the music. She's not the only one.

"We have a lot of fun," Lake says. "We get people dancing on the tables."

"Often we're wide-eyed and surprised at the reactions we get," says Dow.

There's little that can curb the enthusiasm. The band is hardcore, busking in the blustery outdoors even during the winter months when there's no snow-tire equivalent for banjo strings.

"You find the gloves that work the best," says Lake.

"And you get good at tuning on the fly," says Herford, whose early-morning busker motivation at the group's Public Market gig is to initially get up enough tips for a breakfast sandwich (that takes "a good 45 minutes," he says). Meanwhile Scally keeps her pipes hot by nursing on a big mug of Earl Grey.

In keeping with its outmoded roots, The Pickpockets plan on releasing a cassette soon (what, no 78s?), and to continue to busk a move on happy feet with its joyful noise, both indoors and out.