The tundra-like temperature had pantsed the thermometer, and it was snowing sideways when I walked up to the Firehouse Saloon on the corner of Meigs and Clinton. The place was packed to the walls with an excitement that mixed with the steam heat wafting out to the street. The scene had a rock 'n' roll feel to it, but the sardined crowd wasn't there to dig a band or yuk it up with a comedian. They were there to watch women ceremoniously take their clothes off in a grand show. They were there to witness the salacious spectacle that is Rochester's own burlesque cabaret, Sirens & Stilettos. For the next two hours, the audience was delighted as the troupe's performers bumped, ground, shimmied, shook, flashed flesh, and bared their wares. But this was way more than stripping or sexploitation; this was a modern-day reverential, referential slant on an age old art form and its myriad origins.

Sirens & Stilettos slipped onto the Rochester scene about four years ago as a burlesque cabaret. And though often confused with stripping or topless dancing, the striptease in burlesque is much more. It goes way beyond tits for tips. Its emphasis is on the camp and on the tease. It's more of a vaudeville event, a floor show with breasts — a ritual, if you will. Still, moral panties get in a bunch, which frankly adds to the thrill. The philistine concern is that of exploitation and objectification.

Not so, says S&S founder and performer Ruby Sparkles.

"It's empowerment," Sparkles says. "We're not Victoria's Secret models; we have all shapes and sizes. We have short girls, tall girls, really skinny girls... and then we've got my booty." A booty that Sparkles shakes like an earthquake.

Sparkles approaches her own performances with classic vamp and camp. Living burlesque legend Tempest Storm (now in her 80's and still performing) is her hero.

"She is 100 percent my favorite," Sparkles says with a squeal. "The red hair, the big boobs — I've met her twice."

Taking a page from Storm's book of shimmy and shake, Sparkles is more of a traditional burlesque performer. She doesn't rely on a gimmick, but rather slithers and peels out of an elegant get up slowly and methodically to drive the audience wild with anticipation, aided only by minimal props and what her mama gave her.

"I love it all: the gowns, the feathers, the rhinestones," she says.

And Sparkles is heavily tattooed, giving her performances a modern, albeit rebellious, stance.

"There were tattooed performers back in the day," she says. "It was just part of the whole vaudeville thing."

Sparkles had been stripping for a while when she was approached by a friend in Buffalo to try burlesque.

"My best friend, Ava La Faye, had been burlesque dancing since she was 18," Sparkles says. "She had been trying to get me to do it for a few years, until I finally said 'F*** it, let's do it.' I started dancing with her troupe, The Dykes of Hazard; it was a variety show. We performed at Ani DiFranco's church. I was the hot, straight burlesque girl."

But Sparkles felt there was a growing need for the spectacle in Rochester. "People want to do more than just see bands," she says.

The opportunity arose when she was asked to go-go dance for one of the shows for the pop-punk band Keaton after the Suicide Girls bailed.

"So our first gig was go-going at Dub Land Underground in booty shorts and gloves and feather fans. And I made hats."

The next step was getting more women to flesh out the ranks. The one requirement: confidence. "You have to get up on stage and take your clothes off in front of people," Sparkles says. "You can't be a shy burlesque dancer. You're in your skivvies and pasties on stage. You have to have presence."

Those with presence who have made the cut and now dance as Sirens & Stilettos (besides Sparkles) are Sassie Cin, Evie Delilah, Fanny Forte, Lolita Lush, Alyce Dee, Liyli Havoc, Sweet Syanide, Pout Olivier, and emcee Penny Scandal. This line-up righteously celebrates the female form in all its varieties from the sweet and petite to the gloriously glamazon.

"We have no restrictions as far as body type," Scandal says. "You don't have to be overly skilled at this. If we can tell you're really interested in this and it makes you happy, that's important. We look for enthusiasm. That's the big tip off to how dedicated they're going to be."

Scandal is a dedicated potty mouth (more vulgar than Captain Hook with jock itch) and is a show in and of herself. She hypes the performers, belts out a show tune or two, and whips the crowd into a further frenzy.

"This is the first time I've ever been on stage since primary and middle school plays," she says. "I hadn't really spent a lot of time pondering what burlesque was or anything related to it until it fell into my lap. For me, this is more about how I've come out of my personal shell in the past year that I've been involved."

"Over the years, burlesque has become something empowering for women to do," she adds. "Just a show to celebrate femininity or masculinity — there is boylesque, after all — so it's just kind of celebration of yourself."

There are numerous theories and stories of when and where striptease began. Salome got a plug in the Bible with her Dance of the Seven Veils. French colonists in the 19th century observed women in the Ghawazi Tribe in North Africa performing a dance where the performer disrobes searching for an imaginary bee. But it was belly dancer Little Egypt's torrid bump 'n' grind at the Chicago World's Fair in 1893 that really got things rolling. Giving a tawdry twist to belly-dancing moves, Little Egypt inspired the striptease forerunner, the cooch dance — also referred to as the hoochie cooch or hoochie coochie. 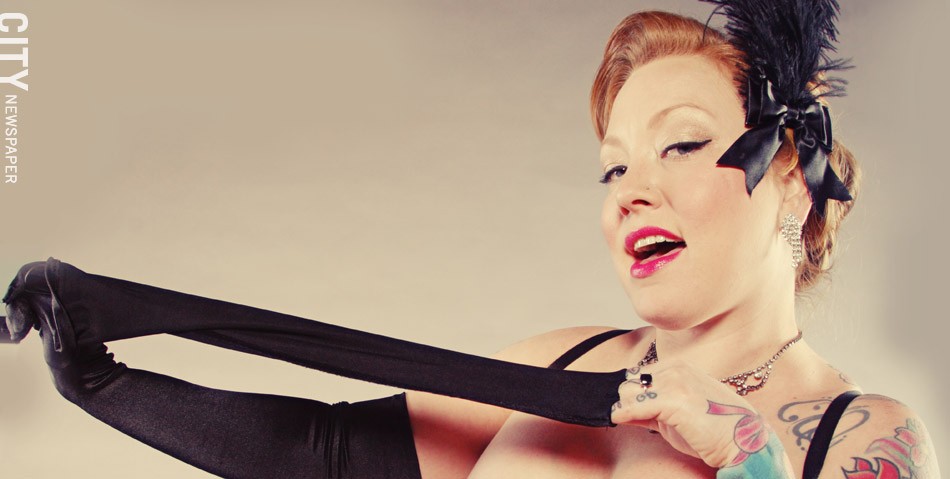 And whether it was viewed as exploitation or empowerment, the striptease had forever set the perception for women's role — for better or worse — on stage and screen. But Scandal sees burlesque, then and now, as women reclaiming their sexuality and dishing it out on their terms.

"I can understand where they're coming from when they talk about the exploitation part," she says, "but the exploitation loses a bit of its 'oomph,' because we're purposefully doing it, making fun of the fact that everything exploits women these days. We're getting mostly naked and shaking everything for the people, and that's what's getting them to come. It exploits women on a certain level, but only if you let it. That's the beauty behind it. We don't let that happen. We may be up there shakin' it, but I've had to put audience members in their place from time to time."

A Sirens & Stilettos audience, made up of men and women, is boisterous but never belligerent, swept up in a wash of temptation, tease, and lowbrow sophistication. With the peeling away of each layer, the tension builds. There are shouts of encouragement, screams, whistles, and laughter. Lots of laughter.

Burlesque (from the Italian word burlesco) by definition was — and still is — a lampoon. It's vaudeville's nasty little brother: a bawdy, naughty little bastard full of coarse, blue humor, slapstick, and striptease. Originally the strippers — or ecdysiasts — were merely just a part of the overall spectacle of burlesque. But it was a spectacle that ultimately destroyed itself.

Starting in burlesque's classic period in the 1940's and 1950's, performances advanced rapidly, shifting emphasis from shake to shimmy 'n' shake to striptease to just plain stripping and ultimately to nudity. Once a new layer was shed, there was no turning back. It would have been easier to put toothpaste back in the tube.

Initially, the laws and the societal hysteria that applied to and assailed burlesque actually helped it grow by keeping one of its most titillating qualities afloat: its forbidden nature, its taboo allure. Morality and decency had the law on their side, which slowly tightened its grip, adding restrictions and revoking permits as strip-teasers and promoters looked for loopholes. Still, ultimately the critics, cynics, puritans, Bible-beaters, do-gooders, and detractors weren't burlesque's undoing but rather burlesque itself, as it ushered in more and more of less and less.

Technology, pornography's increasing accessibility, and everyday fashion trends that grew more provocative proved to be the final nails in burlesque's coffin, and it was all but broken by the mid-1960's.

Flash forward to today, where naked anything is everywhere. Contemporary outfits like Sirens & Stilettos offer a refreshing respite from what is considered stripping now.

Because of this misconception, where burlesque gets lumped in with stripping, the finger wagging and accusations persist. Sparkles shrugs it off. "Rochester can be rather white collar and stuck up," she says.

But not that stuck up. Sirens & Stilettos Cabaret shows routinely sell out.

"We've exploded with our permanent fan base," says Scandal, "With those who are guaranteed to be there every time. This is kind of the first time burlesque has made itself known in Rochester in a very long time, so it's nice to see people get behind it. All the girls are pushing to come up with new routines for every show. We rarely recycle numbers. We invite guest performers like comedians, slapstick clowns, sword-swallowers."

"I have girls who do the more dub-step music and use hula hoops and Isis wings," she says. "But I think that creates a good dynamic and variety. You don't want to see 10 girls doing the same routine, so we have a whole array."

The latest Firehouse Saloon show was a veritable varietease. Scandal had the crowd hyped and howling. The night's theme was Sirens & Stilettos' send-up to Mardi Gras with a girls-on-parade opening, a creepy voodoo priestess, a belly dancer, and glamour girls in opera gloves, all with clever peel appeal leading up to the tassel-twirling finish in nothing but pasties and a G-string... and sometimes less. Ah yes, the dreaded nip slip. Scandal explains the scandal.

"That happens at least once a show," she says. "You never know who it's going to happen to. It could be something as simple as body piercings getting in the way of the glue, the glue not set properly, glue being too old, putting the pastie on slightly damp skin, or the sparkle spray gets put on first so the glue doesn't stay — there are a lot of things that can result in a pastie malfunction. It's small, but it can be half the outfit."

"It's serious," Sparkles adds. "You could lose an eye."

Performs next on March 13 and April 17, then every second Saturday of the month