March 29, 2017
[UPDATED AND REVISED 04/07/2017] Probably the biggest development news this year is the future of Parcel 5.  City officials have picked a plan that calls for a 3000-seat theater for the Rochester Broadway Theatre League’s shows, with a 150-unit apartment building on top of it .

RBTL has pursued a new downtown theater for decades, but has been unable to overcome concerns from government officials and the public over its construction and operational funding. The organization has a $25 million commitment for the theater from Paychex founder Tom Golisano, but it's not yet clear where the rest of the funding will come from.

Morgan Communities will handle the apartment portion of the project. The company has  a substantial portfolio of housing developments in downtown and the Greater Rochester area.


The other major downtown project is the replacement of a mile stretch of the Inner Loop between Monroe Avenue and Charlotte Street. If you've been over that way, you've seen that the transformation, even without development, is striking. 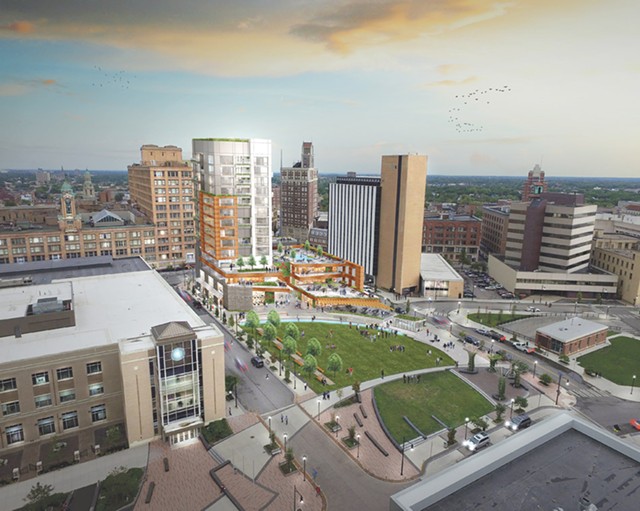 City Council should approve the Inner Loop projects soon. They are: 49 units of affordable housing by Home Leasing; 117 units of market-rate housing and street-level retail by a Morgan/Christa development partnership; and a large expansion of The Strong National Museum of Play. The expansion includes a 201-unit market-rate housing project and a hotel.

The downtown housing boom continues. The DHD Ventures project at 88 Elm Street should open for occupancy this year with 36 high-end apartments, first-floor retail, new headquarters space for DHD, and a wraparound balcony on the top floor. Designs show a modern-looking building with a lot of glass.

Another DHD project is The Residences at the Columbus Building at 50 Chestnut Street in the East End with 60 new apartments, upgrades to 23 existing apartments, a new health club, and a large entertainment space. Fun fact with this one: a 1,000-seat theater was discovered during renovations to the building. 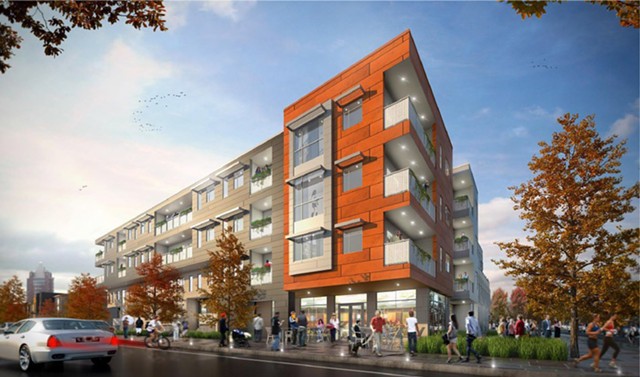 Heidi Zimmer-Meyer, president of the Downtown Development Corporation, says that floors 17 and 18 of The Metropolitan should open this year, and the former Chase Bank is being renovated for apartments, condominiums, and office space. The two floors mentioned by Zimmer-Meyer will contain 14 apartments each.

The Sibley Building is one of the most recognizable buildings downtown and indelibly linked to Rochester's history. It brings back memories of downtown as a former business and shopping mecca. The building, which has been renamed "Sibley Square," is being renovated for offices, retail and restaurant space, and residential.

The residential portion will be split into The Lofts at Sibley and The Residences at Sibley — the latter is for adults age 55 and older. Pre-leasing for the 72-unit senior community will begin in May. Construction on the 104 luxury apartments should be completed by the end of the year, with pre-leasing also to start in May.

MCC's lease at Sibley ends this year, and the college will move into a former Kodak property on State Street.

The much-talked about high-tech business incubator and accelerator will move to its permanent space on Sibley's sixth floor in the fall. High Tech Rochester is currently in temporary space in the building.

An earlier version of this article incorrectly stated when High Tech Rochester plans to move its incubator and accelerator. The organization says the move is planned for the fall.

This article has also been updated with new information regarding Parcel 5.