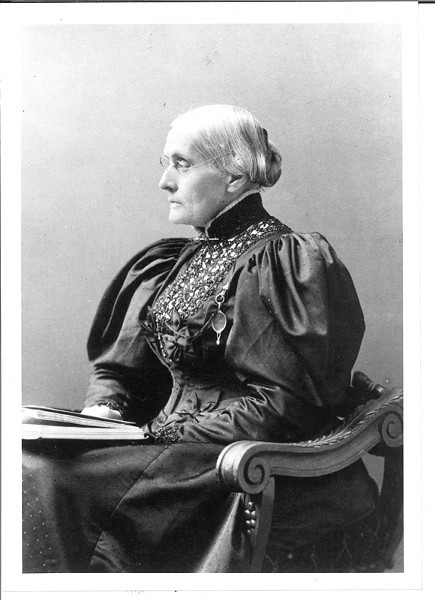 FILE PHOTO Rochester icon Susan B. Anthony and her family came to the area as part of a wave of Quakers in the early 1800's.

Passionate social activism has been a part of Rochester since its beginnings. During its 184-year-history, the city has often been labeled "progressive," thanks to a series of social reformers.

Rochester's activist history can be traced back to a large Quaker population that settled in the region in the early-1800's, many of whose members were committed to social reform. Throughout the years, Rochester religious organizations — from the early Hicksite Quakers and evangelicals to modern Jewish, Muslim, and Christian groups — have made social activism a priority. Local Quaker women, along with Elizabeth Cady Stanton and Lucretia Mott (a Philadelphia-based Quaker), organized the 1848 Seneca Falls Convention.

Among the Quakers who settled in the Rochester area was the Anthony family, which came here in 1845. Susan B. Anthony is known for her women's suffrage efforts, but she was also an active abolitionist, which brought her into contact — and a life-long friendship — with Frederick Douglass. The noted abolitionist moved to Rochester in 1847, drawn by the area's active black population and hotbed of social activism.

Rochester was growing rapidly in the first part of the 1800's. That meant there was plenty of work, and labor unions and activists for workers' rights have long been a backbone of Rochester. Canal boatmen created Rochester's first labor organization, the Mutual Relief Society, in 1830, and since 1855, there have consistently been central labor groups in the city, the current one being the Rochester-Genesee Valley Area Labor Federation. And as long as there has been organized labor, there have been workers pushing for change.

Still, while Rochester has been labeled "progressive," there have always been counteracting forces. In his day, Douglass wrote that "there were moral forces operating against me in Rochester." The amendment to the state constitution that gave New York women the right to vote in 1917 was voted down in Monroe County. And in July 1964, discrimination against black residents, overcrowding in low-quality housing, and high-profile clashes between black citizens and police led to three days of riots. Today, while city government has been Democratic for decades, county government has been led almost exclusively by Republicans.

Serious inequality in Rochester continues today. But building on its unique reformer history, numerous organizations and outlets are available to anyone interested in making a difference — from fights against racism and sexism to advocating for LGBTQ rights, criminal justice, and protecting the environment.