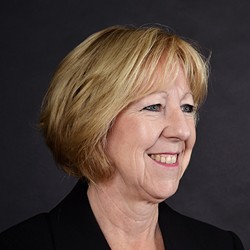 This is a corrected version of the story.

County Executive Maggie Brooks didn’t use this year’s State of the County address to introduce major new programs or make bold pronouncements. She stuck to many of the usual topics: economic development, partnerships the county has, the crushing burden of state mandated spending, and public safety.

She did break some news. She announced that Dr. Byron Kennedy will take over as director of the county’s health department. Dr. Andrew Doniger is retiring after 23 years on the job, Brooks said. But Kennedy has been the department’s second in command.

Brooks also briefly addressed a recent state report of deficiencies at Monroe Community Hospital. As a result of the report and an independent review of hospital policies and procedures commissioned by the county, Brooks fired the hospital’s director.

Brooks said the hospital has an important role: providing long-term care for community members who may have nowhere else to go. Her own grandparents were residents at the hospital, she said.

“We have retrained our staff on new resident care policies,” she said. “We’ve empowered a new board of community advocates. And I personally will be overseeing the implementation of the state-approved corrective plan in the months ahead.”

Brooks made her speech in the Colonial Dining Room at Eastman Business Park and she reiterated her commitment to helping the park succeed.

The park exists because Kodak is shrinking and no longer needs all of the buildings and facilities it built. But Brooks said the park is a symbol of Monroe County’s “limitless potential.” The park is attractive to smaller tech businesses because of the utilties and other infrastructure that exist on the site. And she spoke about several businesses — LiDestri Foods, Optimation, Natcore, ITT Exelis — that are thriving within the park.

Brooks also reiterated her support of the Monroe County Industrial Development Agency (COMIDA). She says that while some people view the incentives COMIDA offers as a cost, she sees them as investments. And she said the projects have benefitted the city in particular. COMIDA assisted projects have accounted for $600 million worth of investment in the city since 2007, she said.

Brooks also said that the county will be launching Helmets to Hardhats locally in partnership with the local building trades unions. The program is meant to help returning veterans find work in the building and construction trades. Local veterans would receive a $1,500 bonus upon certification in the trades.