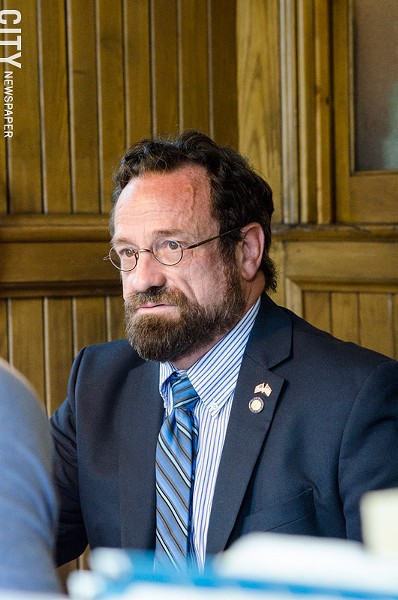 PHOTO BY MARK CHAMBERLIN Harry Bronson.
As Mayor Lovely Warren has continued her push for a state takeover of Rochester City Schools, State Assembly member Harry Bronson has dug in, saying he opposes removing the elected school board. And he's mentioned that he's preparing legislation to improve student outcomes and making the district function better.

On Thursday, Bronson released a draft of the Rochester City School District Empowerment Act, a bill he said is meant to get Rochester’s leaders talking about immediate actions they can take to improve the district.

Warren wants state legislators to pass a law that would remove the Rochester school board and put the state in charge of operating the district for the next five years. She’s asked City Council to put the issue on the ballot in November; Council will vote on that request next month. The referendum wouldn’t require lawmakers to act, but if the vote goes in Warren’s favor it would put pressure on them to do so.

In an interview, Bronson contrasted his proposal with Warren’s approach. The bill is “a measure that we can do today,” he said. “We can pass this and we can put these things in place and we don’t have to wait until January.”

And his bill wouldn’t interfere with any governance change, should one happen in 2020, he said.

But for Bronson’s bill to pass this session, the Assembly and Senate would have to move fast: June 19 is the last day of this year that the Legislature is scheduled to be in session.

The Rochester City School District Empowerment Act targets a few areas of district operations, and Bronson ties them back to Distinguished Educator Jaime Aquino’s report on the district. Aquino recommended that the district develop improvement plans for everything from communications to special education.

Though the board has been working on such plans, Bronson’s legislation would require it and the superintendent to develop a Strategic Academic Improvement Plan within 60 days of its passing.

Bronson’s legislation would require the district to work with the State Education Department commissioner to convert low-performing schools in need of improvement to community schools. Community schools would increase the involvement of neighbors, parents, nonprofits, social services, and higher education institutions in the district, Bronson said. That’s consistent with a major recommendation in Aquino’s report, he said.

The bill would also establish a Children's Advisory Council, which would provide guidance to the superintendent. The seven members of the council would be appointed by the district's school-based planning executive committee and would include — but not be limited to — representatives of community groups; experts in child development, mental health, trauma informed learning, English language learners, students with disabilities, and culturally responsive teaching, according to the bill's language. That would help the district make policies that are beneficial to students, Bronson said.

The bill also:
Bronson has said he's been working with education experts, union officials, and community leaders on the legislation.

"Assemblyman Bronson's bill is no solution at all. It’s more of the same.
"His goal is to prevent parents from having a true say in how their children are educated. Just yesterday, he wrote an editorial where he admits that neither parents nor students were consulted to create his so-called plan. They are the ones most impacted.
"Assemblyman Bronson represents less than 20 percent of our city’s students and he’s trying to take away the ability of all city parents to decide the future of their children’s education.
"Having talked to hundreds of parents, children and community members over the past year, I know that our community is ready for a total reset, not a Band-Aid. By trying to stop our citizens from voting on putting our children first, Assemblyman Bronson is single-handedly allowing Albany special interests to control what happens in Rochester.
"It's time to give parents the voice they deserve in their child's education. And, that is through the power of the vote.”


"I agree wholeheartedly with Mayor Warren – what families in the City School District need is real, meaningful education reform, not more watered-down solutions from the same politicians who have been part of the problem. As I said at my recent State of the County Address, the hard truth is that too many of our children aren’t being offered hope for a better today and a brighter tomorrow. Allowing voters to decide a path forward for the City School District would provide that hope for the first time in a long time. The Mayor’s proposed referendum has my full support."