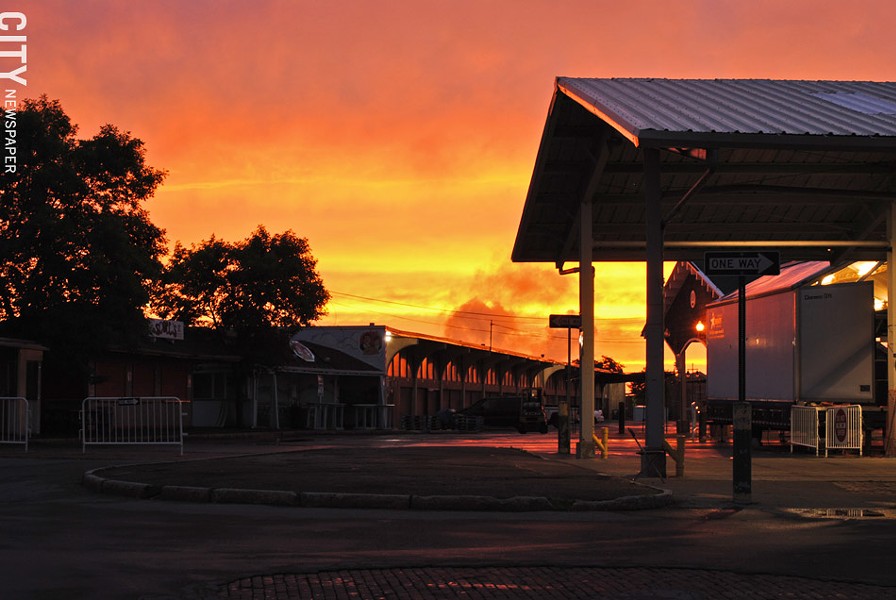 PHOTO BY MATT DETURCK The Marketview Heights neighborhood is named for the Public Market (pictured), but doesn’t share in the market’s prosperity.

Scott Page states an obvious but bitter truth: Fixing up a few homes a year is nice, he says, but it doesn't transform a neighborhood. For that, he says, you need drama.

Page is the principal of Interface Studio, a Philadelphia-based urban planning and design firm. The City of Rochester hired Interface to create an Urban Renewal District plan for the Marketview Heights neighborhood in northeast Rochester. City Council got its first look at the draft plan during a meeting last week.

Marketview Heights is named for the Public Market — one of the city's most popular attractions and the place to go to boost your political profile or campaign for a cause. But the vitality of the market has had limited spillover to the surrounding neighborhood, which struggles with blight, low property values, crime, and other problems.

City Council voted in 2011 to make the neighborhood an Urban Renewal District. The 60-acre district includes 13 blocks of Marketview that are a city-designated Focused Investment area. The latter designation singles out an area for improvement through an extended, intense application of resources and services.

New development has also taken place through Focused Investment. And there have been other efforts to improve the area, including a master plan and planned improvement project at the Public Market, and an improvement project for the Union Street rail bridge.

The Urban Renewal District is a way to build on the gains achieved through those other efforts, particularly Focused Investment, says City Council member Jackie Ortiz, who lives in Marketview Heights. But it's not without controversy.

"It allows the city certain rights, to be able to do certain things," Ortiz says. "There are some things that will probably be controversial in regards to taking down houses — acquiring them and starting new development."

Historically, Urban Renewal has been controversial because, in the 1950's and 1960's, it involved large-scale demolition of neighborhoods and downtown areas, sometimes including historic buildings.

But the drama that Page talked about — the plan's punch — comes from a proposed 75-unit townhouse development on Lewis Street.

The city would need to acquire 13 privately owned parcels and a parking lot belonging to Ametek Power Instruments — the lot would be relocated — to build the townhouses. The infill and rehab strategy for Marketview would require additional acquisition of private property.

Page said that the people being relocated would have first shot at the new properties. The renewal plan calls on the city to have "preliminary conversations with individual owners of affected properties" to explain eminent domain and to talk about relocation expenses and possible buyouts.

A seemingly minor element of the plan could also have a dramatic impact: the gating off of Marketview's alleys. The alleys have become veins of criminal activity, officials say, and act as getaway routes for drug dealers and other criminals.

Interface proposes gating the alleys so that only neighbors and first responders have access. Neighbors could also be recruited to beautify the alleys, the plan says.

Creating density in the neighborhood overall would also improve public safety, officials say, because you'd have more eyes and ears on the streets.

City Council members had several questions about Interface's plan at last week's meeting. The city is trying to break up the concentration of poverty in its neighborhoods, including Marketview Heights, Ortiz said, and the townhouse development, with all affordable rental units, won't achieve that.

Page said that it's what the market can support currently, but that could change down the line.

Ortiz said the plan is also lacking in commercial development.

"It's got a couple of things for employment," she said, "but not really as many as I'd like to see."

Council Vice President Dana Miller said a frequent challenge the city faces when undertaking economic development projects is convincing neighbors that they won't be priced-out if and when property values improve. Officials at the meeting talked about ways to alleviate that concern, such as phasing in any resulting tax increases.

It's important to remember that there's no funding for the Marketview plan yet, and that the plan still needs the approval of City Council. The city's Beckley says that the plan is a multi-year endeavor and that the city would look to the state and federal governments for funding.

"Financing is its own journey," she said.

Another challenge: sustaining resident involvement. Marketview residents have been extremely involved in the development of the plan, Beckley and Ortiz say. But getting them to take ownership of their neighborhood is the key to a successful, sustainable transformation, they say.

"You just can't turn to an outside party to make your life different in a given neighborhood," Beckley says. "So I really would emphasize the human dimension in all of this. They don't have to be best friends, but everybody has a common benefit when people come together and beautify a corner, turn it into a garden from a lot that's just bleak. And that does call for organization and effort."

A good sign that Marketview residents are ready to take responsibility for their neighborhood, Beckley says, is the success of the Marketview Heights Collective Action Program. The citizens effort, which has been going for six years, consists of three actions teams: safety and security, housing and development, and beautification.

The program recently received a $50,000 grant from the Greater Rochester Health Foundation, Ortiz said, which will be used to take an inventory of the neighborhood's human assets.

"Who lives in our neighborhood? What do they know how to do?" she said. "Are we really utilizing people who live in our neighborhood to the best of our ability? Everyone has something to contribute; sometimes you just don't know it."

A public informational meeting on the Urban Renewal District Plan will be scheduled soon, Beckley said.