Residents of Brighton’s Meadowbrook neighborhood off of South Winton Road have successfully filed an amendment to revoke racist language in their deeds that historically forbade the sale of lots or homes in the tract to Black people.

New York declared such racial covenants illegal in 1962, several years after the U.S. Supreme Court ruled that they were unenforceable. But after learning about the deed restrictions, in part from CITY and Democrat & Chronicle articles about a report on the covenants, some members of the neighborhood wanted to publicly repudiate a blatant example of historic and structural racism that happened in their own backyards.

Report: Monroe County awash in racist land deeds
Racist deed restrictions that are no longer enforceable but remain on the books plagued Monroe County, now we must confront their damage.
By Jeremy Moule
News
They started the Confronting Our Racist Deeds (CORD) Initiative to coordinate the work that would be necessary to strike the covenant from the subdivision’s deeds. The single line covenant reads “No lot or dwelling shall be sold to or occupied by a colored person.”

“They had an idea and a vision of the neighborhood and this racial covenant played into that,” Stacia Rush, one of the CORD Initiative committee members, said during an interview last week. 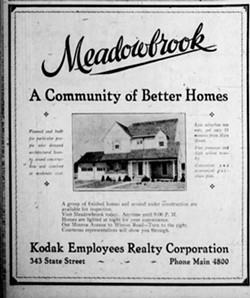 Meadowbrook was built by Kodak’s real estate arm and the racial covenant was contained within the 1929 certificate of restrictions, which is attached to the deeds for all properties in the tract.

But the document contains another provision that allows residents to revoke any covenant or restriction. To do so, the amendment must be signed by the owners of three-quarters of the properties in Meadowbrook.

CORD held four signing events in September and October, after which they were shy of only a small handful of signatures. Committee members went door to door to get the remaining few they needed. The amendment subsequently filed with the Monroe County Clerk’s Office replaces the racial covenant with a statement prohibiting various forms of discrimination in future sale or occupancy of the properties.

Even though racial covenants are legally invalid, revoking them sends a powerful message, said Johnita Anthony, a Meadowbrook resident and CORD member who is Black. It acknowledges one of the ways that Black people were historically steered away from certain neighborhoods and adding an anti-racist covenant in its place sends the message that the neighborhood stands against discrimination in housing.

“It makes me feel I’m going into a welcoming neighborhood,” Anthony said.

The Meadowbrook neighborhood doesn‘t want the CORD Initiative to end with the revocation of the subdivision’s racial covenants. It formed an education committee to help residents continue to learn about systemic and structural racism, for example.

CORD has also published a guide to help other Rochester-area neighborhoods figure out how to revoke racial covenants on their deeds. It lays out step-by-step how the process was used by Meadowbrook neighbors. Residents of other subdivisions, including Brighton’s Evans Farm subdivision have been in touch with CORD Initiative members.

“Getting that covenant revoked was our top priority, but from the very beginning we wanted to reach outside of our neighborhood and that specific act,” said Susan Murphy, a CORD Initiative committee member.

The Monroe County Clerk’s Office has put together a brief guide for searching property deeds for racial covenants, which is available on its website, monroecounty.gov/clerk.

Deeds dating prior to 1975 have been archived on microfilm — 47,000 rolls of it — and have not yet been digitized. Finding a property’s original deeds, which is what typically contains any covenants, may require some searching. County Clerk Jamie Romeo said that finding any requirements for revoking a covenant may require additional research and that staff are available to assist with searches.