Ox and Stone is a great example of a restaurant that works well within the space that it occupies. The beautiful brick mansion features a neutral colored main dining room with dramatic, rolling arched ceilings and a feel that strikes that balance between relaxed and refined. Ambiance isn't the main driver for why I decide to go somewhere to eat, but this is a room where the low light just feels right and comfortable. I walked away impressed with how the original architecture was colored while embraced for what it was.

Ox and Stone's menu is based around Latin influences — most of which I would consider to be Mexican — but there are flavors of Spain and, as mentioned on its site, an American culinary flair. Dishes like Spanish poutine, mussels with chorizo, and chicken wings all toe that line, but I dove in with the fried calamari ($12), which was sharp all the way through and became my favorite dish. Squid pieces had that perfect, light cornmeal crunch with the interior meat still tender. The guacamole's ingredients highlighted the flavor of the avocado instead of overwhelming it like some can. The hot sauce that came along was fantastic: bright and spicy, and one I'd love to have on my table at home. If you don't like seafood, the bowl of fried pig ear strips ($7) were another crunchy and chewy option that impressed. Rich and a great dish to share around a table. 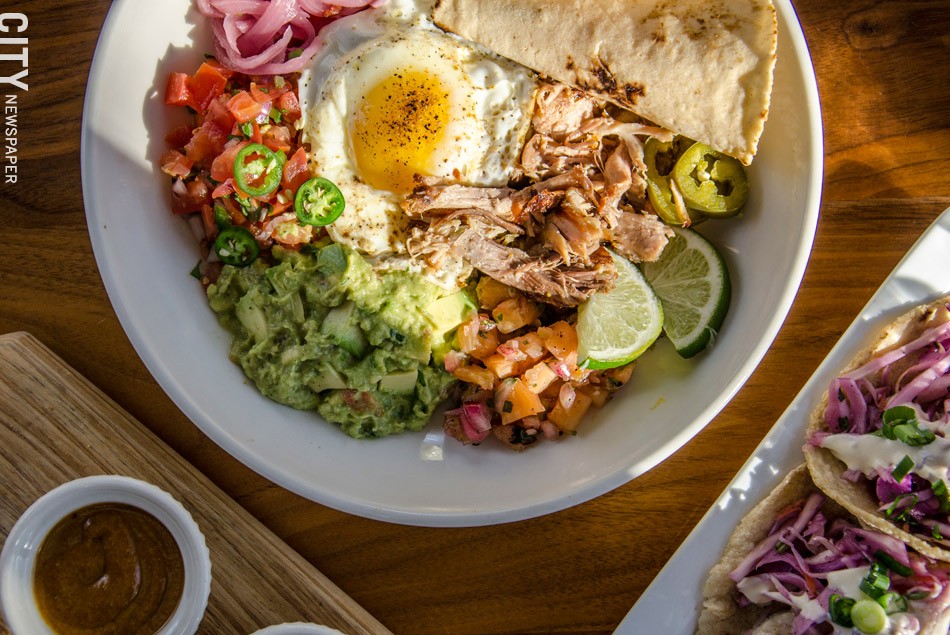 Another starter that hit the spot was the chicken pozole ($9). In the versions that I have been served, pozole resembles a Mexican version of the Vietnamese pho — a flavorful broth served alongside potential add-ins to spike the soup to your liking. The difference is that the broth in this case brings a citrus and herbaceous base along with stewed hominy — dried and processed maize — and a meat of your choice. The bright soup base was augmented nicely by the addition of some crunch elements like radishes, cabbage and serrano peppers, and some fresh pico de gallo.

Less successful were the chicken empanadas ($10 for 3). I did enjoy the depth of the sauce on the inside, but the amount of onions obfuscated the chicken and an odd sweetness in the crust took it out of balance. Lamb meatballs ($9) were pleasant and served with a tomato based sauce and olive oil, but needed some salt to enhance the whole dish.

I applaud Ox and Stone for making corn tortillas in house. The tortillas were used in the tacos ($5 each) and served along with the carnitas plate ($15). The masa (ground, processed corn) and lard-based tortillas are pressed in a hand press and cooked on a dedicated flat top to order. I liked the more rustic flavor and texture compared to similar commercial products although they were a touch on the brittle side. That is kind of inherent to making them fresh so don't be surprised if they crack while you're eating. Both the beer battered cod and the mahi mahi tacos featured fish that was nicely cooked, although in the end, the crunchy fried fish version with slaw and seasoned crema stood above the fresh mahi verison. The one concern I have is that for $5 each, the tacos seemed a touch on the small side.

The carnitas plate was generously sized and featured pork butt slow-cooked with spices, citrus, Coca-Cola, and pork fat. I appreciate Ox and Stone cooked the meat similarly to what I understand the traditional method to be, but I would have loved some crisping of the shredded pork. There's an added texture and deep, complex flavors when meat is browned on a flat top and that was missing. Black beans made up a good chunk of the plate and I enjoyed the assertive citrus flavors on the tender beans. The guacamole mentioned before was a good fit here, but the pickled vegetables didn't make much sense other than the jalapeño. Everything required a little extra salt, but this is a solid dish overall.

The biggest disappointment was the mole negro chicken ($14 for a quarter) served with rice and the black beans. The chicken was fall off the bone tender, but the sauce lacked the complexity needed, especially in a dark mole. Some more smoke, nuttiness, and depth along with a more restrained sweetness could have made this a dish worth talking about.

The flan ($6) was the only dessert I got to sample and it was an up and down affair. The thin, sugary caramel sauce was a good basic version with plenty of vanilla and a touch of bitterness. The flan itself was a touch on the bland side and even with the sweetness of the sauce that stood out. Minor tweaks would make this a much better staple dessert. 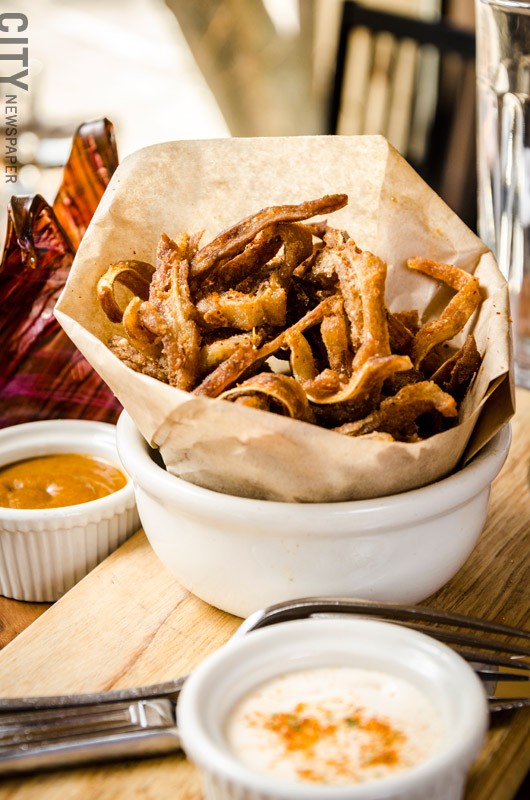 I walked away from both of my visits satisfied with the general direction of the food at Ox and Stone. There could be more attention paid to balance and complexity, but the general execution was solid and the calamari dish made me legitimately excited. This is the kind of place I'd recommend to people who want to get that date environment without heading to a fine dining restaurant. Beyond what I actually reviewed, grabbing chapulines (cooked crickets), which are more than a sideshow dish, and a cocktail at the bar would be a great intro if you end up visiting late night.