Robot and shark vs zombie donuts: Here's the serious message behind a silly kids book 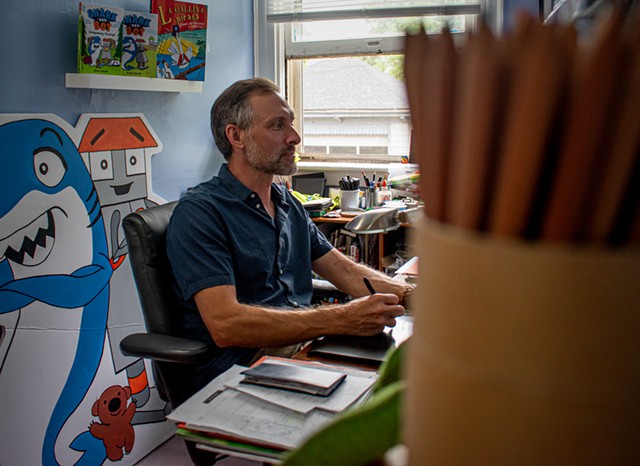 Growing up in Pittsford, Brian Yanish didn’t know he would one day author children’s literature. He just knew he was into illustration, particularly the newspaper comic strip “Bloom County” by Pulitzer Prize-winning cartoonist Berkley Breathed.

Yanish also didn’t know he’d eventually work on “The Muppets” at Jim Henson Productions or go on to create “ScrapKins” — a series of books about monsters who encourage kids to create art projects and toys out of everyday items that he would one day promote on “Sesame Street.”

Yanish, 49, has been writing and illustrating for about 10 years, and now works on his book series featuring characters Shark and Bot that he shares with readers at events such as the Rochester Children’s Book Festival at Rochester Institute of Technology on Nov. 5. Book Three of the series, titled “Zombie Doughnut Attack!” was released on Aug. 2 by Random House and follows two friends — a gregarious shark and a thoughtful robot — as they build a castle for a school project. But the stakes are high, and Bot begins having stress-induced nightmares about zombie doughnuts. Will the duo finish the project in time?

“I like the idea that Shark is exuberant and silly and passionate about his ideas, even if he has no idea where they’re gonna go,” Yanish said. “And I like the fact that Bot is a little more grounded and sees the world differently. And you realize that celebrating that these characters are so different is a wonderful thing. And yet they still find this common ground.”

The first Shark and Bot book introduced the odd pair with a message about embracing individuality in the face of bullies, and the second story dealt with homesickness while away at camp.

“Zombie Doughnut Attack!” focuses on overcoming anxiety. Shark walks the reader through a mindfulness exercise as he comforts Bot.

Yanish was partly inspired by the anxiety he’s endured during the pandemic. But he said he also wanted to write the kind of literature he wishes he could have read as a kid.

“When I was growing up, we certainly didn't talk about a lot,” Yanish explained. “And there wasn't a lot of dialogue around feeling anxiety at school, or what to do with it. And so, as I got further into the story, and with my editor’s help, I kind of leaned into that.

“And I said, ‘This is a journey that the characters are going on, but I think it's something that kids can relate to because maybe they're not given the space or the voice to express how they're feeling in a particular situation.’ But by seeing these characters go through it and talk about it in a normal way, and not in a stigmatized way, I would hope that kids would feel a little more open and be like, ‘Oh, well, sometimes I feel off.’” 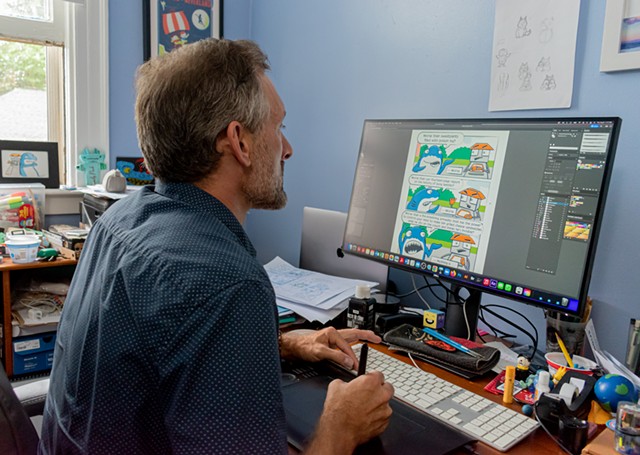 Eventually the readers of “Zombie Donut Attack!” learn how anxious thoughts can distort thinking and keep them from enjoying the things they love. Even though the book tackles these complex ideas, the heart of the story is silly, Yanish said.

Michelle Nagler, senior vice president and publisher at Random House Children’s Brands and Graphic, edited Yanish’s latest Shark and Bot book. She said that while the main goal of a graphic chapter book written for “emerging readers” between 5 and 9 years old is to entertain, it’s important to help teach children how to relate to the world around them as well.

“We’re also looking for characters in situations that reflect what those children are going through,” Nagler said. “So often, it’s about feelings. I’d say in the case of Shark and Bot, there’s a strong ‘social emotional learning’ — SEL — component to these books.” 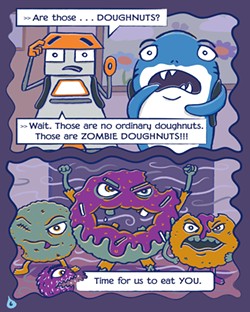 The Shark and Bot stories are funny, Nagler said, but the emotions of the characters are overt and universal.

The graphic chapter books have the added benefit of appealing to children for whom reading is challenging.

“For kids who struggle with decoding and learning to read, graphic novels help turn the pages a lot faster,” Nagler said.

Yanish is working on a fourth Shark and Bot book, set in an amusement park, to be published by Random House next year. The author is also working on a picture book and a novel for middle-grade readers about the Erie Canal.

“As long as there’s a new story out there, I’m going to chase it,” Yanish said, “whatever format it happens to be.”