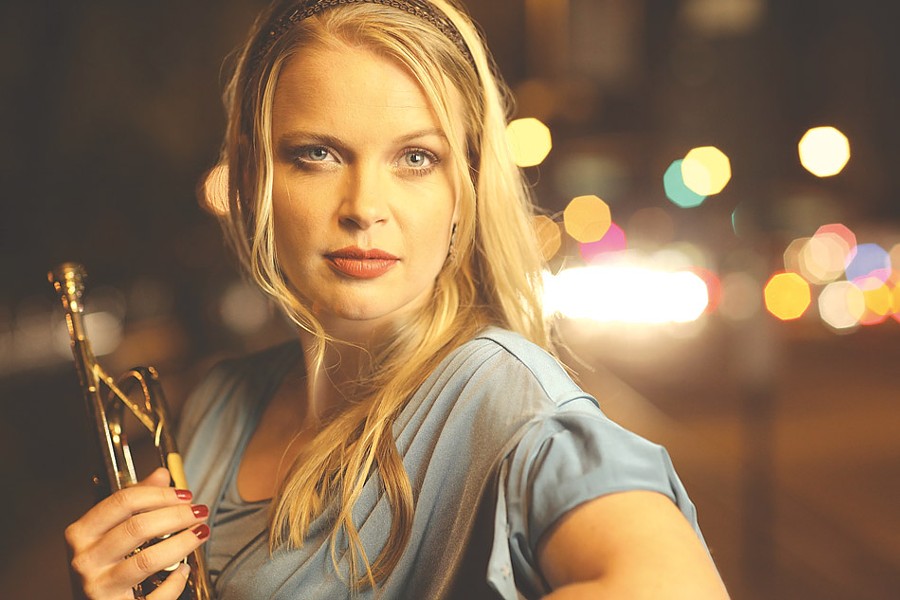 It's hard to pin down what it is about Bria Skonberg. She's a double threat as a trumpet player and vocalist — good luck trying to pick which one you like more. And I would be remiss if I failed to mention her tow-headed pulchritude.

This New York City-based composer, educator, and self-proclaimed instigator has been showered in awards. Crowding her mantle is The Jazz At Lincoln Center Swing! Award (2015), DownBeat Magazine Rising Star (2013-15), and Hot House Magazine Best Vocalist and Best Trumpet (2014-15), to list a few.

Skonberg's focus is hot jazz, that explosive period in music that has its roots in New Orleans and Dixieland, and which ultimately led to the birth of the blues and the swing era. And if you acknowledge Louis Armstrong as its king, then Bria Skonberg is its reigning queen.

Skonberg paused from her busy schedule to answer a few questions on her approach, why she's an instigator, and what she does for fun. An edited transcript of that interview follows.

Bria Skonberg: Both trumpet playing and singing are first and foremost based on air support, so I keep my lungs healthy. My trumpet playing is on the fiery side and my voice sits best at a smoky smolder. The biggest — and yet fun — challenge has been figuring out where the two distinctly different voices meet, and finding or writing a repertoire that serves as vehicles for them.

Are you a trumpet player who sings or a singer who plays trumpet?

When I start to think about this question I get confused. Others may have opinions, but for me, they're equal voices — friends even at this point.

What exactly is hot jazz?

Hot jazz to me is more of a mind state while approaching jazz, an excitement for the explosive side of classic jazz and the time when it was being created. Historically, when Louis Armstrong left New Orleans in the 1920's — first for Chicago to play with King Oliver, and then moved to New York for the Fletcher Henderson Orchestra — is when his sense of rhythm infiltrated the music. There is a sense of urgency, bubbling over excitement he adds with technical brilliance at this time that the rest emulated, and it was solidified with his Hot Fives and Sevens recordings starting in 1925. The general meaning nowadays is the beginnings in New Orleans and blues up until the swing and big band era of the 1930's.

Without losing too much of the timelessness in your sound, how do you keep it fresh and unique?

My classic jazz sensibilities and "accent" were instilled early on, and I feel that strong foundation allows me to explore in many ways without losing it. I believe the most unique thing we can offer music these days is ourselves, and I'm enjoying sharing my experiences through songwriting and writing arrangements. I try to incorporate the different sounds and stories I collect along the way.

What are some influences found in your music that aren't readily apparent?

At the same time I was learning about jazz, I played in a ska band, worshipped pop stars, listened to classic rock, and internalized Bee Gees hits on my record player. All of these things and more work their way into the music.

What got you started down this musician's path?

It's been a gradual commitment. A counselor in my high school suggested I audition for college in music, so I went for it. I genuinely enjoyed team and band management and had a wonderful group of friends and players that stuck together after high school, so I got a real-time education in the music business. The blend of people and opportunities captured my interest and continues to interest and surprise me.

What is your earliest musical memory?

My grandma Connie played piano solely by ear and would accompany my brother Eric on the fiddle. She had long nails that she would paint red and they would clack away on the keys.

How old were you?

You've received a number of awards. Is there any one in particular that you're especially proud of?

Last year I was given the Jazz at Lincoln Center Swing! Award which I am really honored by. I believe it's given to individuals who are displaying not just musical talent but are contributing to the overall scene and paving a unique path. When I moved to New York, I didn't attend a prestigious post-secondary and have generally worked my way in from the front door, bottom up. To be recognized by a leading institution is really encouraging.

What makes you an instigator?

I don't wait for good things to happen; I make them happen.