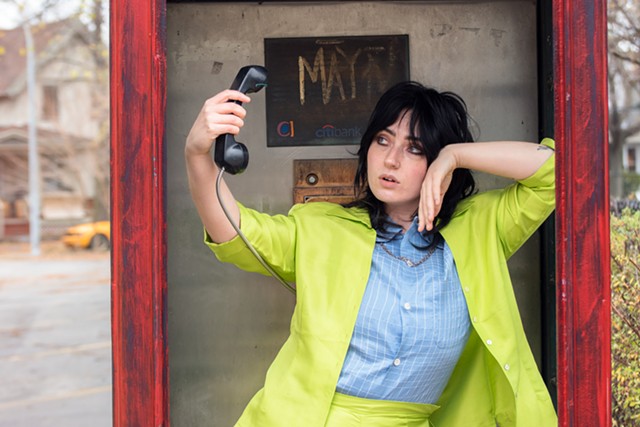 In her latest TikTok hit, Boy Jr. asks what the song “Backyard Boy” by Claire Rosinkranz — the cutesy pop songstress who sings about crushes and feelings — would sound like if it were written by Jack Stauber — the alternative electro-pop musician known for his experimental, ’80s-esque videos filmed on VHS cassettes.

Then, Boy Jr. proceeds to assume all the traits of Stauber — the “wobbly” bass guitar, the cheesy synthesizers, the deep vocals, the cassette-tape audio fidelity — and sing “Backyard Boy.” As the music plays, the video cuts between footage of Boy Jr. playing a single note on a keyboard as she deadpans to the camera, dancing with a bedsheet over her head, and a crudely drawn cardboard cutout of her bopping around to the beat.

The effect is not only a hilariously bizarre mash-up of two budding musical sensations but a showcase for her talents as a performer in her own right. It is a TikTok formula that Erica Allen-Lubman, the 24-year-old songwriter behind the one-woman band Boy Jr., has perfected.

Her pithy videos — loaded with musical hooks and carried out with world-conquering, childlike conviction — are equal parts parody and performance art and routinely garner tens of thousands of views. The mash-up of Rosinkranz and Stauber drew 140,000 sets of eyeballs in two days. Not quite viral numbers, but astonishing for an artist working from her Rochester bedroom.

“I’ve made funny videos since I was really young, and I’ve always wanted to have that be a core part of what I do and what I make,” Allen-Lubman says. When she was a girl, she recalls, she watched The Disney Channel and dreamed of wearing cool outfits and singing about her feelings in a pop band. Her TikToks make that m uch clear.

Part of the allure of Boy Jr.’s videos is the nostalgia they evoke. It is the sort that is part fondness for a time past and part longing that people in their 20’s, now and always, begin to feel for their childhood.

That wistfulness is front-and-center in her TikTok titled “It Still Fits (My Pikachu T-shirt)” a synth-pop nugget that got over 180,000 views and would later become a full-fledged tune on her recent full-length album “Starter Pack.”

She uses her channel @boyjr.69 on the social media platform not merely as means to promote her music, but as the primary vehicle and creative spark for her ideas, which she later expands into complete songs, EPs, and albums. For example, capitalizes on Boy Jr.’s success by featuring some of her most popular creations on the new EP “Costumes,” released in November.

A TikTok she released in August, in which she covered a snippet of the Sufjan Stevens’ song “Mystery of Love” in the style of electro-pop duo 100 Gecs, garnered more than 610,000 views. The complete version of the song became the EP’s opening track. A month later, her take on Britney Spears’ late-’90s megahit “...Baby One More Time,” reimagined as a song by Gorillaz, amassed more than 1 million views, and became the closing song on “Costumes.”

Each video typically begins with a formulaic thought experiment. In “What if Billie Eilish wrote ‘Last Nite’ by The Strokes?” the Rochester multi-instrumentalist quickly breaks down the musical ingredients she mixed together to create the mash-up: “Samples for drums. Creepy geetar. Creepier build up. Monster backup vox. Super close lead vox. ASMR adjacent. LAYERS.” What follows is a brief clip of Allen-Lubman performing the resulting cover as Billie Eilish, complete with the pop star’s signature dyed-green hair, and an oversized T-shirt to match.

Kristina Kaiser, of the local art space The Yards, has hosted live Boy Jr. gigs on multiple occasions, and has been impressed with Allen-Lubman’s approach to performance.

“I was just really taken by her style, and just her ability to be a one-woman show and really be able to do it all,” Kaiser says. “She just has an incredible stage presence and playfulness, and I was really captivated by her different levels of creativity. I mean, she’s not only a musician but also puts a lot of thought into costuming and what sets are going to look like.”

Watching Boy Jr. on TikTok, it’s easy to let her tongue-in-cheek deliveries, outlandish costumes, and jarring cross-cuts distract from the underlying talent at play in her work. Her videos are a tutorial on modern studio production aesthetics that reveal a trained ear for music and an eye for images. Put simply, she knows what works for her audience.

“I think overall, it’s just made me a more educated producer and writer,” she says of how TikTok has influenced her creative process. “I think it’s helped me get my ears in gear. I think that’s kind of a mental muscle you can work.”

The daughter of musicians — her mother is a flute teacher and her father is a professor at the Eastman School of Music — Allen-Lubman studied studio composition at SUNY Purchase, a school known for its quirky musical alumni in Regina Spektor, Dan Deacon, and Rochester’s own Seth Faergolzia. 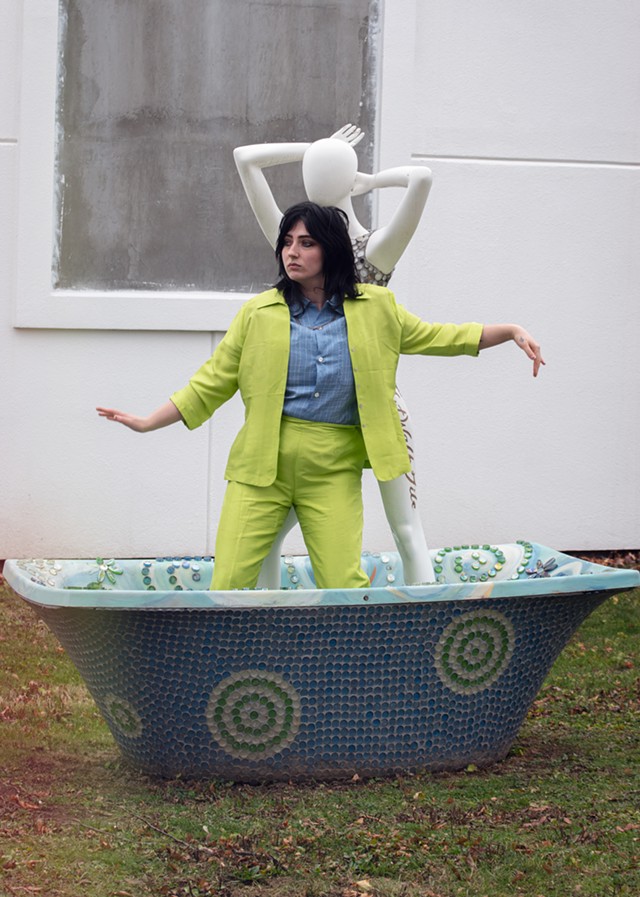 While Allen-Lubman’s music and videos carry their own distinct oddball vibes, she welcomes going mainstream.

“I think that I particularly identify with wanting to be a pop musician ’cause I want to have commercial success,” she says. “I’ll ‘sell out,’ if it’s not anything evil.”