In recent years, the number of co-work spaces where people can rent desks and offices have grown in Rochester. The spaces have shared amenities such as printers and coffee makers and, like other workspaces, they have their own built-in social environment.

But a new kind of co-work space, one that focuses on assisting people in technology careers, recently opened on the second floor of the Sibley Building. Boundless Connections Technology Center (rochester.boundlessconnections.com) offers not just a co-work environment, but many resources for just about any tech skill a person may want to learn.

“We don’t turn anyone away,” says CEO Christina Lopez. “We have people who are taking an online course and feel like they just can't do that on their own. Maybe they don't have fast enough internet, things like that. So we have ways for people to engage in anything tech-related. We'll find a way. If we don't know, we connect to the larger community to find the ones that do.” 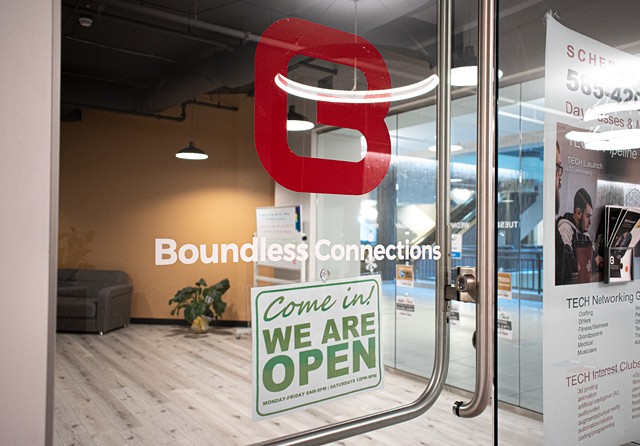 “Instead of trying to get 30 people at a time to learn something, we’re individualizing learning,” Lopez says.

You can walk in the door wanting to learn coding or robotics, and they’ll hook you up with the necessary tools and someone who can show you the ropes. Or, say you’re enrolled in a design program at a university and just can’t get the hang of the software you need to use. They’ll buy the software and connect you to someone who can give focused instruction.

Maybe you want to start a small business selling some products you’ve designed, and need access to a 3D printer. Boundless Connections, which has three 3D printers and staff who know how to use them, can help.

All of it comes with a price. Program and membership costs vary, but adults who want full access can expect to pay $1,500 per month or $4,500 per three month session.

Since opening in August of 2020, about 125 people of all ages and backgrounds have used the center, with an average user making 31 visits per year, according to Lopez.

While the Rochester tech center is new, the company that became Boundless Connections was created in 2009 by Lopez, who had worked as a programmer for knife-maker Cutco, and Mike Marvin, a computer science and math professor at Jamestown Community College. Their goal was to address what they felt was a missing link in America’s tech industry, Lopez says.

In 2012, Lopez and Marvin launched a tech literacy pilot program for 13 to 17 year olds. Lopez opened the first Boundless Connections center in 2017, located in her hometown of Olean in Cattaraugus County. The Sibley building location is the second.

While technology is ever-evolving, what hasn’t changed is that people learn in different ways and have unequal access to tools. One of the company’s goals has been helping people get into college, stay in college, and be successful in college, Lopez says.

The company’s TECH Unleashed year-round program for 13- to 17-year-olds meets Thursday afternoons, and includes a junior membership to the tech center as well as snacks. Scholarships are available to those who need them. Though it’s a group setting, the instruction is still individualized — every week a facilitator helps each student work incrementally toward their goals.

“That facilitator is basically a project manager for whatever project you decide to do,” Lopez says. “Your project will be in service to the community. And as you're learning, you're actually building relationships, you're learning what are called ‘soft skills,’ I call them ‘essential skills’ — actually making eye contact, being able to explain things in a way that people can understand — they start learning that from day one.”

Brenton Cousins, 21, got involved with Boundless Connections at age 13 in Olean. The company had a booth at his school’s fair and he began attending its summer camps.

By his first year in college at the Rochester Institute of Technology, he says, he had enough know-how to help lead his school’s neurotechnology exploration team (NXT). “I already knew what they were doing,” he says.

Today, he is in his senior year in the computer engineering program and is Boundless Connections’ director of operations.

Adults can get involved in Boundless Connections through TECH Launch, which is a self-paced program for ages 17 and up. That’s where the co-work aspect really kicks in — you can arrive with a goal and sign up to use the space and its tools, and access mentoring if you need it.

Then there’s the TECH Clubs and Networking TECH Groups. They meet weekly and function as a social group, a troubleshooting arena, and a way to go deep with visiting lecturers on various topics such as augmented reality, artificial intelligence, and Bitcoin.

Anyone who wants to use the center’s tools can sign up for a low-commitment pass, Lopez says.

“Our programs are for people who are interested in getting into the tech industry, but we have day passes and season passes for everyone else,” Lopez says.

“It’s like you’re coming home,” she goes on. “You come in, take your shoes off, get yourself a cup of coffee or hot chocolate, and settle in.”