Judge gives Democrats authority to choose elections commissioner
A state judge gave MCDC the green light to elect a new elections commissioner, but the party's lawyer says he will challenge the ruling.
By David Andreatta
News
In a statement, Boose said she's supporting Rochester City Council member Jackie Ortiz for the position. Ortiz announced her candidacy for elections commissioner Monday and has also received the backing of Mayor Lovely Warren. 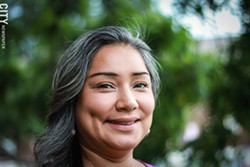 “Now more than ever, I feel that it is imperative that Black and Brown people work together to lift each other up," Boose said in her statement. "That’s why after learning that another woman of color was seeking to be our Elections Commissioner, I have decided that I want to support Ms. Ortiz and use my experience in service of her and the Board’s success.”

Also running for the commissioner job are Board of Elections secretary Maureen Dauphinee and Andrá Mitchell Harlee, a remote donor support associate at Act Blue who's worked on several campaigns. The candidates self-nominate, which they have to do by Monday.

She said that “unfortunately everyone would focus on and magnify any errors” while marginalizing the Board of Elections successes in the face of challenges created by the pandemic.

Because of the coronavirus pandemic, there was a very large influx of absentee ballots and also fewer polling places than usual since some sites had to be consolidated. There were complaints that some people did not receive requested absentee ballots in time to complete and return them and that some voters had difficulty casting ballots during early voting and on Primary Day.

The announcement on Tuesday evening came a day after Rochester City Council member Jackie Ortiz announced her candidacy for the position of Democratic Board of Elections Commissioner. Ortiz was first elected to Council in 2009 and she would have to resign from the seat if she's elected elections commissioner. The remaining members of City Council would then select and appoint a Democrat to replace her.

"If given the privilege to serve our community as commissioner, I will work to ensure transparency, accessibility, and equity at the Board of Elections— and build a talented and diverse team that represents our community and ensures all voices are heard," Ortiz said Tuesday in a statement thanking Boose and Warren for their support.

Also on Tuesday, Mayor Lovely Warren released a statement through the Monroe County Democratic Committee saying that for her, the debate was always about having a fully-functioning Board of Elections that could protect the citizens’ right to vote.

Warren said that Boose rose to the challenge, and led the board through a successful primary election during unprecedented times. Warren said that she is “excited to see two women of color working side-by-side” to lead the Board of Elections.

CITY staff contributed to this article.