by Jeremy Moule and Gino Fanelli

This year’s primary election occurred under extraordinary circumstances, with a global pandemic upending the traditional voting system. But just as extraordinary was the amount of confusion and problems that surrounded both absentee ballots and in-person voting.

During a news conference Thursday, the two elections officials acknowledged that there were problems they will need to address before the November general election, particularly around poll worker training. But they also stood by their work, noting that they faced the compounded challenges of the COVID-19 pandemic, the first year of early voting for primaries, and the fact that they were overseeing three separate elections at once — the Democratic presidential primary; state, local, and congressional primaries; and a special election for a House seat.

The primary was also the first election either commissioner had administered.

“This was a tremendous undertaking and I will say that we and our staff did an excellent job,” Republican Elections Commissioner Lisa Nicolay said during a news conference Thursday.

“This was unacceptable, democracy was not served on Tuesday,” Assembly member Harry Bronson said Thursday, adding that the Board of Elections failed at some basic functions, such as making sure voters got the right ballot.

Bronson pulled in about 60 percent of votes cast at polls and leads his opponent Alex Yudelson, chief of staff to Mayor Lovely Warren, by roughly 1,200 votes. The 138th Assembly District contest is still, however, very much in play. As of Wednesday, the Board of Elections had received 5,178 absentee ballots in that race, a number that was already outdated by Thursday morning, when the office received a massive new batch of mail-in ballots.

Bronson seeks court’s help in counting ballots
A campaign spokesperson said the litigation was filed to ensure that ballots are accepted, rejected, and counted on proper terms.
By Jeremy Moule
News
On Monday, Bronson filed a pre-emptive lawsuit seeking the impoundment of all machine, affidavit, and mail-in ballots in the race, as well as judicial oversight of ballot counting if needed. A judge didn't issue an order but left Bronson an opportunity to file an amended complaint. Bronson said Thursday that he planned to do so either later in the day or early Friday.

Jeremy Cooney, who led his opponents Sherita Traywick and Hilda Rosario Escher in the 56th Senate District Democratic primary, also said Thursday that he was concerned about the combination of inexperienced elections commissioners and a shortage of skilled poll workers.

“In November, we need to hire that poll workforce earlier and train them more,” Cooney said. “A quick PowerPoint presentation isn’t going to do it.”

On Tuesday, CITY received complaints about a shortage of Spanish interpreters at some polling stations with high Spanish-speaking populations, about an assigned polling station where a sign posted on the door read “No Voting Here Today,” and about a voter whose polling site didn’t have a ballot with the Assembly and Senate primaries ready for him.

“On behalf of the board, we extend our sincere apology for any mistake or error that occurred by a poll worker at a polling site,” Boose said during a news conference Thursday. “...We understand that this is a very, very serious thing to take on and although we wanted to be perfect, no system is perfect.”

Boose said the commissioners are taking the various issues brought to their attention into account and will use them as “learning lessons on things that we need to improve” to make sure the general election runs smoothly, such as poll worker training and the way that she and Nicolay conduct site visits.

When asked Thursday, Boose said she agreed that some poll workers made errors because they were inadequately trained. 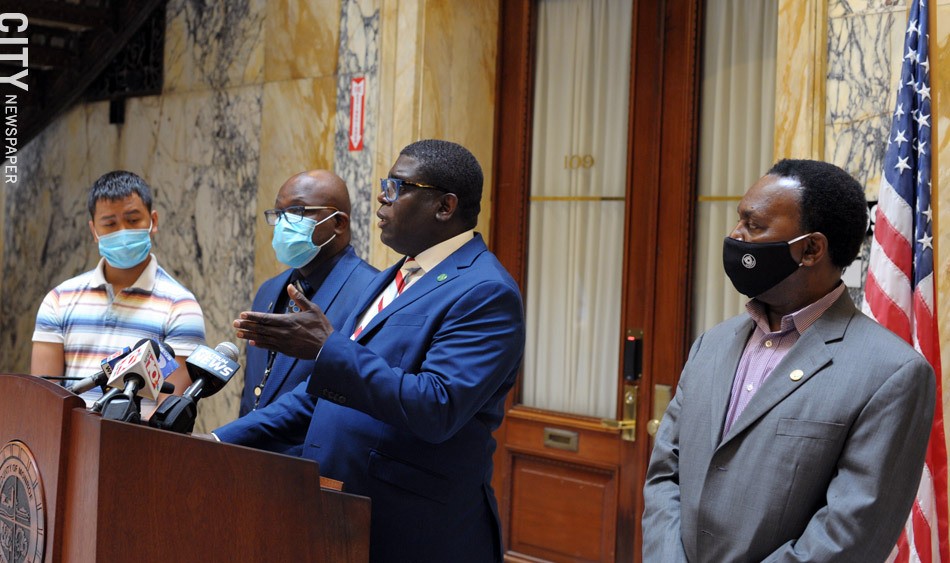 He said they endured “a trial by fire in the worst possible conditions” and noted that the commissioners weren’t just dealing with administrative and logistical challenges brought by the coronavirus pandemic, but also an office that was short-staffed and missing its top training and information technology personnel.

“There are people who are actively working to sabotage LaShana Boose and her ability to do the job,” Felder said during a news conference Friday.

He criticised a lawsuit, brought by one faction of Democrats, that blocked Democratic caucus of the county legislature from selecting a permanent elections commissioner for the party and set a July 25 election for the position. Felder has on several occasions stated that he believes Boose should be the commissioner, a position he reiterated Friday.

He also scolded the members of his caucus who wouldn’t support legislation he co-sponsored with Republican Majority leader Steve Brew to add six new supervisor-level positions within the Board of Elections, including two deputy elections commissioner posts, supervisor of training and recruitment, senior trainer, supervisor of absentee voting, and supervisor of information services.

That legislation was submitted at the request of Nicolay and Boose, who warned that the additional staffing was need to ensure the sound administration of elections, especially the November general election.

County Executive Adam Bello then vetoed the legislation, but legislators overruled him in a 20-9 vote; all nine votes supporting the veto came from Democrats.

Boose and Nicolay each said Thursday that the training supervisor positions created through the legislation would help better prepare poll workers for the November election.

Thursday, Boose and Nicolay also responded to complaints about long lines at polling stations, which they chalked up in part to social distancing efforts.

Nicolay said the commissioners would like to find some larger polling sites for November. But she noted that many places that have hosted polling sites didn’t want to for the primary because of the pandemic. Even school gymnasiums weren’t available.

“We had to work with what was available,” Nicolay said. “Yes, we will definitely try to find bigger spaces because some of the locations that were roomier, it was a better situation.”

But the commissioners’ explanations didn’t satisfy one of their critics, County Legislator Rachel Barnhart, who in a statement called on Boose and Nicolay to resign and for the Democratic and Republican parties to “immediately act to replace them with competent elections administrators.”

In her statement, Barnhart noted that the COVID-19 pandemic created challenges for counties across the state “but news reports indicate only Monroe County and the notoriously-troubled New York City had extensive Primary Day meltdowns.”

“What happened Tuesday was very serious, as it undermined faith in our elections and damaged trust in our democracy,” Barnhart said.