Not five minutes after I took my seat at Boomtown Café, a new deli in the New York style in Brighton, a tornado of activity swept through the place.

Firefighters from the Rochester Fire Department’s Truck 3 pulled up with a hunger burning in their bellies. A group of University of Rochester students walked in demanding take-out. Boomtown’s owner Kathy Reggo was preparing boxes for orders already placed. Through it all, an old man who has already become a regular, wouldn’t stop talking about how the eatery had transformed itself from its former incarnation as a Chinese-American restaurant.

The rush recalled the amplified energy of a deli on Manhattan’s Lower East Side that made Boomtown truly live up to its name.

Like most new businesses this year, Boomtown’s grand opening was delayed by the pandemic. It was supposed to open on March 18, but its health and occupancy certifications were put off as government offices navigated the crisis. Late winter became mid-summer, and Boomtown officially opened in the Shoppes at Lac De Ville plaza on South Clinton Avenue on July 20.

Reggo and Boomtown’s manager, Danielle Alaimo, had spent the better part of a year renovating the space that was once home to Golden Dynasty. Transforming a former Chinese-American restaurant into a New York-style deli is about as arduous as you might expect. By the time they stripped the place of the decor and fixtures they didn’t want, there was nothing left but steel frame and concrete.

The benefit of an overhaul like that was that it gave Reggo and Alaimo the opportunity to hand-pick every detail of the new restaurant. Boomtown’s interior is a blend of a home kitchen counter and a mom-and-pop diner, although, in this case, it is more of a mom-and-mom-and-mom diner. All three regular employees are working mothers. Tina Rhodes, an employee who, like Reggo and Alaimo, wears hats from server to cook to custodian, rounds out the trio. 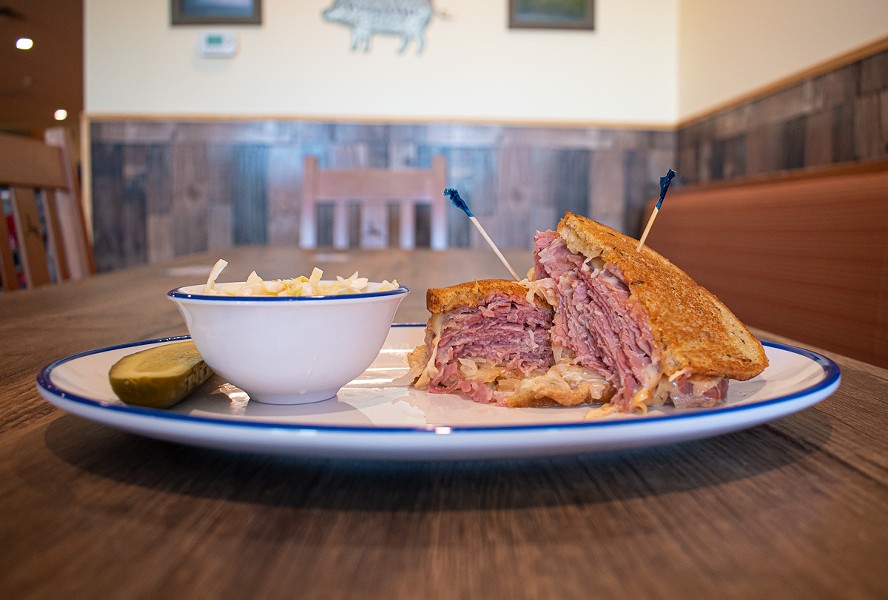 I arrived around lunchtime craving breakfast. The menu has a familiar diner look: Sides and appetizers in the front, followed by specialty burgers, hearty salads, and personally stylized hot and cold sandwiches, punctuated by all-day breakfast on the back page. Anyone can get a filling meal for $9.99-$10.99. There is also vegan fare, and a “Schmutz Plate” ($12.25), Boomtown’s take on a Rochester staple, with kosher salami, corned beef, and sauerkraut.

I opted for the “Leo,” an omelet or eggs scrambled with lox and sautéed onions ($8.99). I had the scrambled eggs and substituted the usual rye toast with an everything bagel supplied by the Rochester bakery Balsam for an extra dollar. The coffee ($1.89) is Vassilaros & Sons, a Queens-based roaster founded by Greek immigrants more than 100 years ago, and currently headed by the fourth-generation matriarch of the family. If you’ve ever ordered a cup of coffee from a New York City street cart or diner, chances are it was Vassilaros. 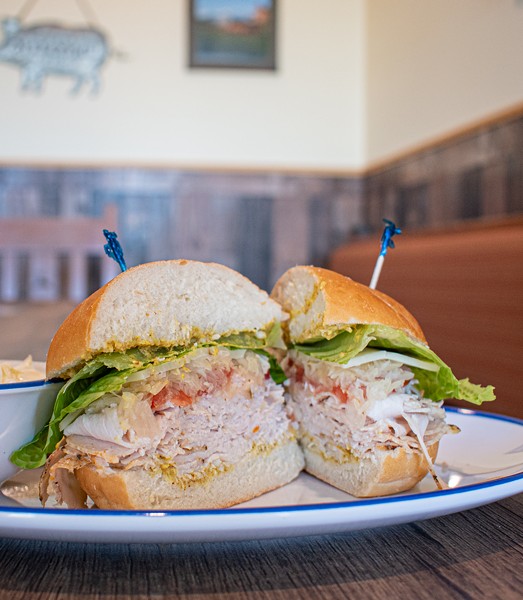 Later in the week, I had a customized sandwich: in-house roasted turkey on a hard roll with sauerkraut, tomatoes, and onion, with a side of fries and coleslaw ($9.50 + $2.29 for the fries). The hard roll was the size of a fist, and it barely enveloped the heaping sheets of sliced turkey stuffed in its maw. It was the type of sandwich my grandmother would serve me upon complaining that I was “wasting away.”

Boomtown’s aim is to give Rochester a blend of a Canarsie Kosher deli and a Brooklyn Italian market, but still pay homage to Rochester’s own rich food history, all while providing a place for folks to congregate and socialize. Although social distancing has made physically congregating in close quarters an issue, the atmosphere is alive at Boomtown.

Worth noting is Boomtown’s commitment to employing people with disabilities and fostering a family atmosphere among its workers. The ambition is personal for Alaimo, who has a son with disabilities and bristles at the “rotating door” approach to hiring that often plagues the service industry.

Boomtown Café is a delight, from its food, to its employees, to its character, and the characters who walk through its doors.

The only thing about the place that gave me pause was its name. For me, “Boomtown” conjured images of the Klondike Gold Rush rather than a New York-style deli. Then Alaimo refreshed my memory: Rochester, once little more than a hamlet along the Genesee River, was among America’s first boomtowns.

Chris Thompson is a contributing writer for CITY.