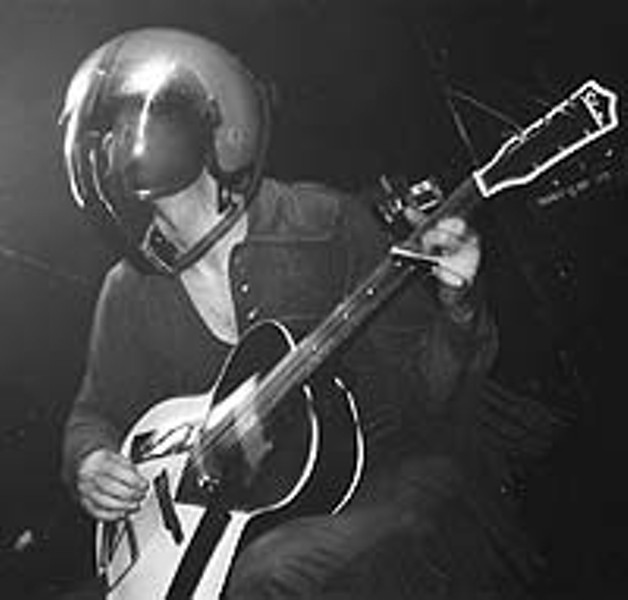 Bob be-bops with bouncing boobs in abundance at the Bug Jar.

Went and warmed my bones in Miami right in the middle of The Winter Music Conference --- essentially the same gay-disco beat pounding everywhere amidst the pink neon, Cuban sandwiches, and palm trees like a broken record for three days. Attendees were a bunch of bleary-eyed kids jabbering jittery German through clenched teeth. I opted to forgo the festivities and tan my eyeballs at the topless beach behind my hotel instead.

And speaking of topless, Tucson's Bob Log III played the rough and ragged one-man band blues, ala T-Model and R.L., whipping the Bug Jar into a frothy Monday-night frenzy. Audience participation was high as Bob implored ladies to "put your boob in my scotch." It was The Purrs' Miss Aimee Lane who got the party started when she plopped a silky milky into BLIII's Johnny Walker Red. When the call went out for some lovelies to sit on his lap, he was obliged by several cuties, including Bug Jar doorman Doug, who eclipsed poor ol' Bob with his voluptuously mountainous pulchritude.

The Asylum Street Spankers wowed Milestones once again on Tuesday, with 100 percent acoustic American music. In a world of high-tech everything, it's nice to go back to basics and still find some comfort there.

Played at The Mohawk (Buffalo) with Alabama's Immortal Lee County Killers who stay on the raunchy, lo-fi side of the dimly lit, dead-end street. They played the blues desperately urgent, and raw.

George Carlin's cynicism was sharp as ever at his Auditorium Theatre appearance, as he suggested a suicide reality show where a bunch of losers could hold hands and simultaneously jump into the Grand Canyon.

All kinds of great local shows happening, like The Boss Martians, The Bamboo Kids, and The Priests, who recently rocked The Montage Grille for the faithful. It just doesn't stop. Thank God.