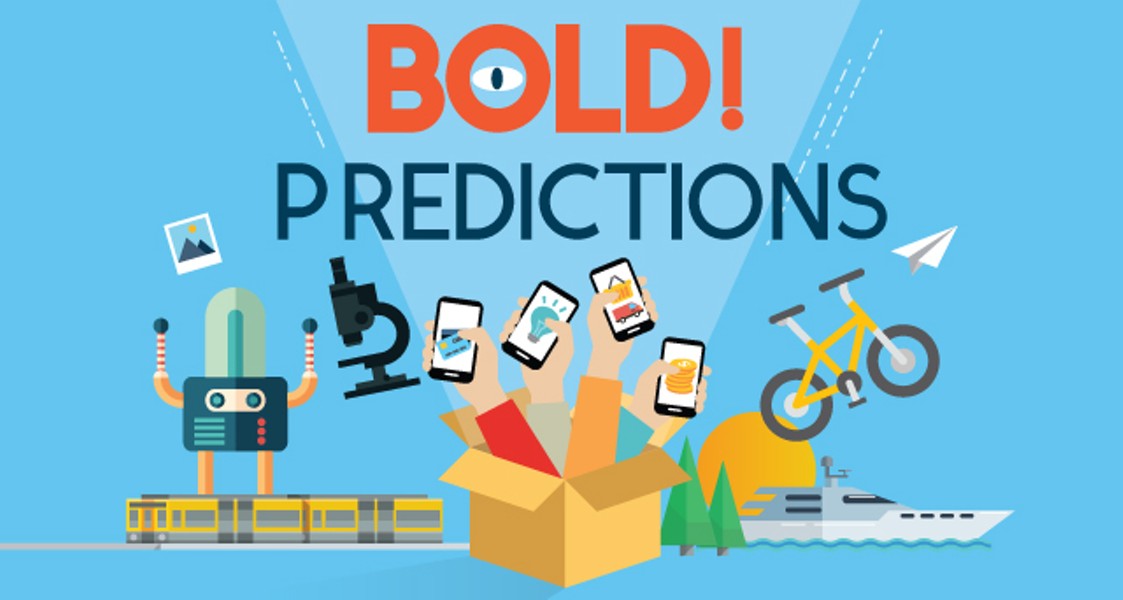 Rochesterians fire up their crystal balls, and in some cases, their imaginations, to share what they think the world, and Rochester, will be like in 2050.

James Sheppard (former Rochester police chief and current county legislator): Policing in 2050 will be significantly different from the way it is being done in the present time. Routine patrol activities will be via hoverboards. Police organizations will be mainly staffed by women, as data will indicate that they are better communicators and less inclined to use force. The main mission of law enforcement will be the protection of food and water storage facilities. Street crime will be virtually nonexistent, as the majority of criminal activity will be digital. Drug use and possession will be decriminalized, with an emphasis on education and treatment to address substance abuse issues.

Every moment outside one's personal domain will be audio and video recorded. DNA samples will be collected and filed at birth, with microchips implanted for cradle-to-grave monitoring. Where's Johnny? Where's he been? Check his tracker history.

Frank Regan (rochesterenvironment.com): By 2050, the planet and our Rochester region will be a much warmer place (on average). There will be more frequent heavy rainfall events, more tropical disease threats, more damage to our trees as invasive species are able to tolerate our winters, and, of course, more heat. Our local climate will suddenly feel like Virginia's after it has been put through a blender. Unpleasant as most of climate change's consequences are, Rochester is not, and probably will not be, experiencing the worst of the disastrous storms, sea level rises, droughts, and life-threatening heat waves already occurring around the world.

If Rochester acknowledges the threat from climate change and begins intense planning, we will be ready for the influx of climate refugees looking for a place with a lot of good water and healthy soil to produce food. If we re-adapt our energy sources to accommodate renewables, Rochester's air will be cleaner and there would be more jobs.

If we use climate change as an opportunity to address many of our past environmental abuses, our environment will be in better shape for the vicissitudes of a warmer world. If we address climate change justly, all Rochesterians will prosper.

If our local media connects the dots with the local consequences of climate change, the public will be more supportive of their leaders and businesses trying to address this crisis. If we make it easy and inexpensive to update our old buildings so that they are energy efficient, we'll have happier and healthier homeowners. If we update our transportation infrastructures so that they are more robust and resilient, more folks will get to all the new jobs that come with proper planning.

Justin Delinois (UR student): I think Rochester will look completely different. I think there will be a surge in the creation of art locally and the city will begin to incorporate it into the local architecture. People from all over the world would come to see the city of art. Our bridges would be replaced with these intricate art bridges that look like waves. Our buildings would serve as huge canvases. The whole city would become an art exhibit. I think eventually the city would see an increase in tourism and we would see many new businesses open, more jobs, and an increase in income locally.

Joanne Larson (professor, UR Warner School of Education): Schools will become knowledge-producing community hubs that are seamlessly connected to other local and global communities. The artificial boundaries within and outside of schools will have disappeared and schools will transform from boxes of old mindset ideologies to sources of original knowledge and culture. Technologies such as the Internet will continue to alter social dynamics moving further into what researcher and scholar Danah Boyd calls "networked publics." Content would be wedded to solving real problems to everyday life.

Karl Kieburtz (UR neurology professor): To stay healthy and address emerging illnesses, your car, home, phone, and workplace will automatically send data on your temperature, heart rate, decision speed, and level of activity to a central service, possibly to an implanted audio receiver.

Brad Berk (UR professor of medicine, cardiology, and pharmacology): Hospitals will be used much less as more surgical techniques become ambulatory, mobile, and outpatient-oriented. And there will be a great miniaturization of devices and new ways of sending them to specific spots in the body for real-time monitoring of organs and tissues.

David Williams (UR professor of optics and ophthalmology): A host of new therapies for restoring vision in the blind through optogenetics, gene therapy, and stem-cell therapy are on the horizon. High resolution retinal imaging technology will inevitably be central to the development of those approaches.

Stephen Dewhurst (UR virologist and vice dean of research): By 2034, new vaccines for HIV, malaria, and mycobacterium tuberculosis will be available and five million lives will be saved each year as a result. AIDS will be a memory due to improved prevention options such as vaccines, microbicides, and antiviral drugs.

The Rev. Marvin McMickle (president & CEO, Colgate Rochester Crozer Divinity School): There will be significantly fewer Americans who will be self-described Christians, unless another event like the Great Awakening reverses that trend. There may be more conflicts driven by intolerance and fear of diversity, too. However, there is always hope. In many parts of the non-Western world, religion's role in society is positive and growing.

Ferat Sahin (RIT professor and researcher): Robotics will become commonplace. We'll see this first in the area of assisted driving, which we're already starting to see. Auto manufacturers have been developing the technology since around 2004, but the costs were prohibitive. As those costs continue to go down and the technology becomes more advanced, we'll graduate to autonomous vehicles. They'll show up first in transportation vehicles like small trucks used for delivery of goods and services. Some European countries are already testing them.

Mohan Kumar (RIT professor and chair of computer science): In the mid 1990's, computer science was all about the computer itself. But we're shifting from being computer-centric to human-centric. Information will flow seamlessly and naturally from us and to us perhaps through some type of integration in the brain. People will have better awareness of themselves and their families, managing resources, and information about the world around us. When you get up in the morning, you might get a summary of what's happening globally, locally, and about you personally. Mobility will be key and it will be taken to a whole different level.

Lonely Medley Centre (popular local Twitter account): Mayor Lovely Warren's vision of Rochester as a cruise destination — roundly poo-poo'd at the time — comes to fruition, and by 2050 the city is one of the world's most popular resort towns. Europeans in particular flock to the city where the "Plate du Garbage" is viewed as a culinary delight.

Charlotte beach is still only open three days a year because of all the algae. Photonics, once viewed as the savior of the city's business future, is replaced in the early 2020's by investments in artificial intelligence. In 2050, the city is the cyborg capital of the United States of Canamericexico and ruled by a benevolent-but-volatile cyborg named Bob Lonsberry IV.

Wegmans, once the pride of local grocery stores, is accused of price gouging during the fateful "Plutonium Blizzard" of 2045, and most stores are destroyed by pitchfork-wielding Rochesterians. Only one store remains – the East Rochester location – because nobody really wanted to go there.

After years of neglect, the Medley Centre is the jewel of Rochester retail, hosting such upscale brands as Saks Monroe Avenue and Gucci/Big Lots. Medley will be home to the world's largest holodeck, where children are allowed to view the history of Rochester by interacting with holograms of Frederick Douglass, George Eastman and, the most famous Rochesterian of all time, Cyborg Walter the Accordion Player.

Mike Governale (president, Reconnect Rochester): In 2050, the old RTS Transit Center is home to an indoor hoverboard park, as bus routes now crisscross the city like lattice (instead of a wagon wheel). At each spot where two transit lines intersect, bike-sharing pods are available. Rochester is also bisected by two high-speed transit lines, one running east/west along I-490, the other following the river between RIT, UR, downtown, Eastman Business Park, and the Port of Rochester. The mayor of Toronto has plans for a fast ferry — TO ROCHESTER.

Theresa Lou Bowick (captain, Conkey Cruisers bicycling program): In the year 2050, Rochester will be one of the healthiest communities in the United States of America. Families, health care providers, insurance companies, employers, and elected officials will embrace the link between cycling, health, and Rochester's Achilles heel: concentrated poverty. This community will incorporate cycling into its master plan for health and anti-poverty initiatives because cycling provides both mental and physical health benefits, promotes family fitness, unites communities, provides cost-effective transportation, and is environmentally friendly.

Bicycle repair apprentice programs will provide opportunities for individuals to learn a skilled trade and earn income. New pedal-assist e-bikes will accommodate lifelong cycling for the aging and/or disabled. Conkey Cruisers Bicycling-to-Better-Health Voyage will blaze the trail to actualizing our vision for a healthier Rochester in 2050 by providing year-round indoor and outdoor cycling opportunities and innovative health and wellness initiatives.