Bob Bunce is back on the grid with 'Blue Normal' 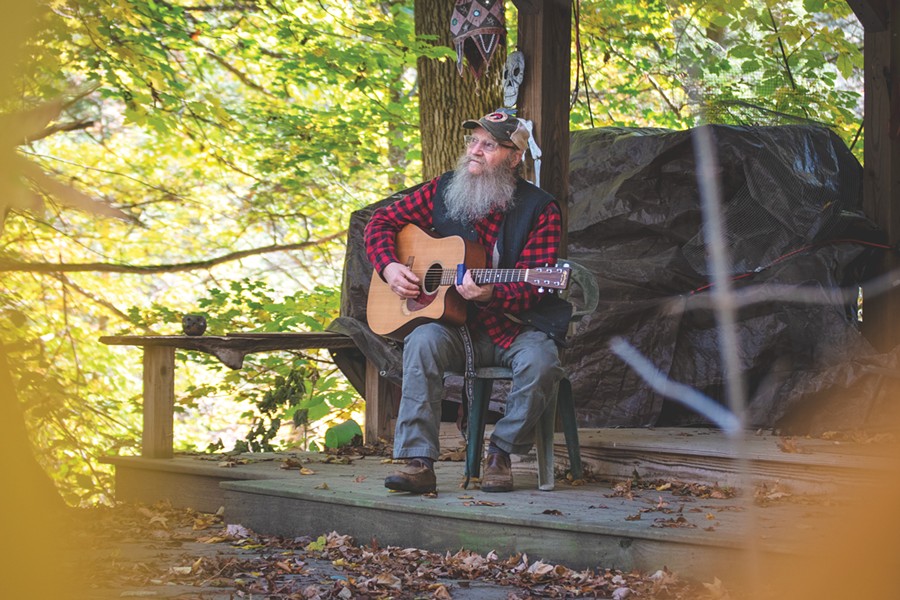 PHOTO BY RYAN WILLIAMSON Bob Bunce plays guitar on one of the two stages he made himself on his rural property near Groveland, New York.
When you pull up to the homestead of Bob Bunce in the Southern Tier, you have to shout your arrival. The man is a little hard of hearing.

He blames prolonged exposure to jackhammers and electric guitars. Bunce isn’t a construction worker, although he knows his way around a toolbox. Rather he’s a folk musician versed in the instruments of independence.

You have to be when you live off the grid for as long as Bunce did.

“Off-grid is lots of work,” Bunce says. “It hardens you up. No municipality to call for help. It gave me a feeling of independence.”

That independent streak is evident on his newest album, “Blue Normal,” a 12-song collection of raw Americana borne of isolation, exacerbated by a pandemic.

Until recently, Bunce, 70, had lived off the grid for eight years. It was the price he paid for a feud with a neighbor up the road who he says wouldn’t allow him to access the utility lines that ran through the neighbor’s property. 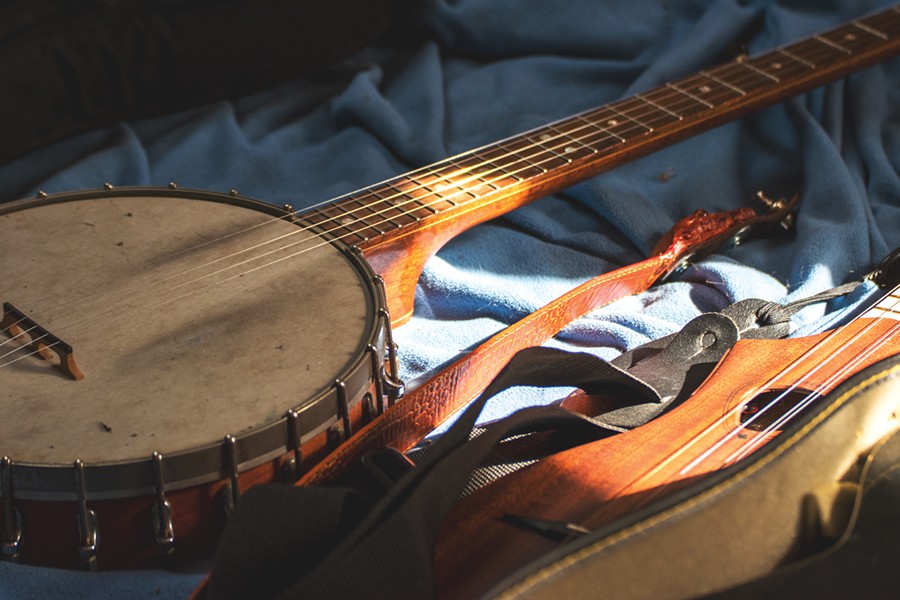 They ultimately reached a compromise that plugged Bunce back in to modernity, although you wouldn’t know it to look around. He lives with his partner on three acres of unpolished land. You might call his spread a compound if it were fenced in, but like the chickens he keeps, Bunce is free-range.

To get to his place from Rochester, hop in the car and drive south on Interstate 390 for about 45 minutes and take the exit for Groveland. Around there, tucked away in the woods atop a steep climb cloaked by a massive canopy of sun-dappled trees is where you’ll find him — if you shout for him.

Plenty of artists in Rochester’s music scene have.

His property is the site of a yearly music smorgasbord called the June Bug Jump that Bunce hosts on one of his two solar-powered stages. The stages sit among about 10 structures on his spread that he built himself, from a lean-to to a deluxe outhouse.

The annual event, which was sidelined this year due to the pandemic, has featured some of the best roots-based musicians from the area, including Danielle Ponder and the Tomorrow People, Folkfaces, and The Crawdaddies. Bunce’s band, Rural Delivery, also regularly performs.

But his bandmates were notably absent on “Blue Normal,” which he cut solo and socially-distanced. The coronavirus dictated the creative process, and the result was a commentary on his new normal.

“Mostly this group of songs were an expression of my anxiety at the times, frustration with folks not being safe, and worrying about my family,” he says.
“I found myself feeling nervous and jerky — like, there’s no respirators for codgers like me,” Bunce says. “So I wrote the song ‘Nervous N Jerky.’” 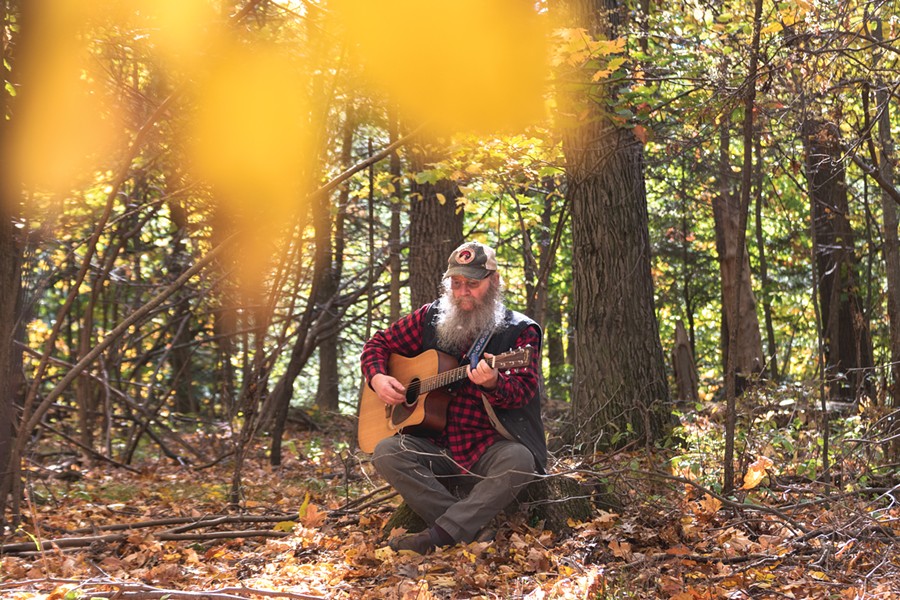 “Blue Normal” is Bunce’s sixth album thus far. He plays guitar and sings with the same casual reserve with which he speaks. He’s sly and cucumber-cool and has been hard at it since picking up the accordion at age 7. He sounds like Mose Allison on a horse or Frank Zappa trying to talk his way out of a speeding ticket. And he loves the whammy bar.

Also missing from the sessions for “Blue Normal” was Gary Holt, of Holt Studios in Mt. Morris, where Bunce has recorded much of his work, including his last album with Rural Delivery, “Mixed Messages,” in 2019.

As he explains it, Bunce recorded “Blue Normal” in his garage “with the wood stove cranking.” “No computer was used,” Bunce says. “I used a TASCAM 24-track digital recorder, sort of old-school, along with the help of a drum machine from the '90s and a keyboard.”

The unlikely marriage lends an oddball feel to the music, with the synthetic drums and keys complementing Bunce’s slippery slide guitar.

Holt, the bass player for Rural Delivery, has known Bunce since 1980, when Bunce was the soundman for a band Holt was in called The Deserters. Holt says Bunce’s lyrics about life in rural America and commentary on global affairs simultaneously conjure images of down-home comfort and rebellion. 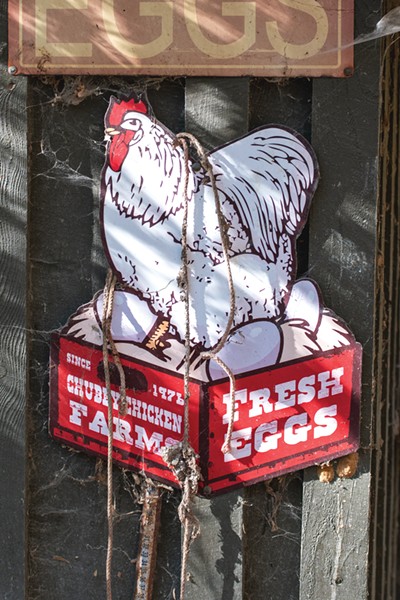 “I think that it is more what he chooses to do, to not follow the crowd,” Holt says. “I really feel that with Bob, that what you see is what you get. He’s self-reliant and I think that’s cool.”

Bunce raises chickens that lay two dozen eggs a day. He keeps a shotgun within reach in case he spots the fox that raids his henhouse. He pumps his own water and has solar panels installed on his garage roof, but cuts 20 cords of firewood a year to get through the cold months.

A self-described hermit, Bunce was a homebody before the pandemic, keeping busy by keeping his property and making music. In that way, the health crisis didn’t change his day-to-day. His routine consists of relaxing, cooking, and writing and recording music for at least five hours.

“We are on the grid now with our system as backup,” Bunce says. “I have battery storage and can stay afloat when there’s a utility issue.

“I like having more time for music and the convenience of cheap electricity.”