BOA Editions' story began much like that of other creative endeavors: When an intrepid individual identified a lack of opportunity, he went out and created it himself. One of the longest running independent presses in the nation, BOA was founded on July 4, 1976 by Al Poulin Jr., who was a Brockport professor at the time as well as a poet and translator. BOA began small, and at 40 years, it remains a tiny operation. But the organization gives its diverse publications an international reach, has published some of the nation's foremost poets, and its titles have received multitudes of awards and distinctions.

"At a certain point, Al became aware that there just weren't a lot of places to publish poetry collections," says BOA Publisher Peter Conners. "There wasn't a small press scene like there is now. And big publishing houses weren't any more interested in poetry than they are today." 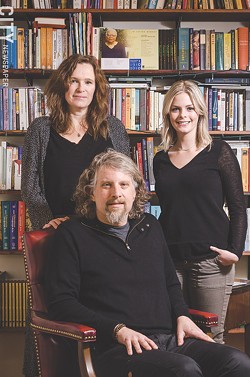 Poulin was friends with W.D. Snodgrass, who won a Pulitzer Prize for his first poetry collection, "The Heart's Needle," in 1960. After, Snodgrass "had written another collection, and he was having a hard time getting it published, even with a Pulitzer," Conners says.

Snodgrass's book, "The Fuehrer Bunker: A Cycle of Poems in Progress" was BOA's first publication, and made for a dramatic entrance into publishing.

"The book had controversy around it, because it was what we call 'persona poems' — poems written in other people's voices — and those people were German citizens or Nazi officials," Conners says. "He basically wanted to look at World War II through the eyes of Germans from all different strata. So it freaked a lot of people out. But I think what Snodgrass wanted to do was say, 'it happened before, it can happen again. These are people.'"

Poulin ran the press out of his house on Main Street in Brockport, publishing a couple of books each year. In 1984, BOA published Carolyn Kizer's "Yin," which had been rejected by many other publishers, but ended up winning a Pulitzer for BOA. "With that recognition came additional grant opportunities, and expansion. Shortly thereafter, BOA moved into downtown Rochester.

BOA Editions incorporated in 1983 as a 501c3. "We're basically willing to stick our collective necks out there and say, 'we know this isn't going to compete with Hillary Clinton's biography, but this is important artwork and we're going to put it out there,'" Conners says. "Fortunately, we have donors and different funding organizations who believe in that mission as much as we do."

BOA moved to its current location on the third floor of the Anderson Arts Building in 2006. Just three staffers — publisher Peter Conners, Director of Development and Operations Melissa Hall, and Director of Marketing and Production Jenna Fisher — are supported by a wider team of freelance designers, interns, and artists.

Each year, BOA receives more than 1,000 submissions and publishes 10 to 12 books. Keeping the number small allows them to spend time and energy getting the books in front of reviewers' eyes, Fisher says.

Submitters vie for the A. Poulin, Jr. Poetry Prize, which is awarded to honor a poet's first book; and BOA's main poetry series, the American Poets Continuum Series, includes poets who have previously published books with BOA or with different presses.

BOA is also committed to publishing translated poetry through its Lannan Translations Selections Series. "We really look for contemporary poets who haven't been published in this country before," Conners says.

In 2007, BOA began publishing two books of fiction per year through the American Reader Series, and awarding the BOA Short Fiction Prize. "Ironically, I think there's more places to publish poetry now than places to publish short fiction," Conners says. "The short story collections tend to be quirky, they might have mystical elements, and they're very language-oriented, as finely-crafted as the poetry."

Conners says that rather than defining a style for the press, and publishing poets who fit into that style, BOA looks across a range of aesthetics, and seeks poets who are doing their own best work.

"This makes for a diverse catalog that can appeal to people from all different backgrounds," Hall says.

In 2003, BOA received a grant from the Arts Council to create their Electronic Virtual Arts Library, which is filled with images of work by Rochester-based artists, including Carol Acquilano, Richard Margolis, Jean Stephens, Colleen Buzzard, and Nancy Topolski.

Authors are encouraged to select an image from the EVAL for their book cover art, the artist is compensated for the one-time use of the artwork, and gains exposure through the distribution of the book. "Approximately a third of all of our books' cover art is chosen through this method," Hall says.

BOA's books are internationally distributed by Consortium Book Sales and Distribution, through many wholesale e-book distributors, and are also available for sale on their website.

"Because BOA is one of the longest-running independent publishing houses, we meet so many poets and authors who were influenced by BOA's publications. A BOA book or an author was their entre into the art form. We're blessed to have inherited that," Conners says. "Our job is to keep that going, to the best of our abilities."

Part of the year-long celebration of BOA's 40th year is interactive. "We're asking, globally, 'What's your ideal reading experience?'" Fishers says. The public can learn how to participate by visiting boaeditions.org/boaturns40. An incentive for submitting a story is the chance to win a signed copy of the new chapbook by Li-Young Lee, who has published five books with BOA. And each month, BOA posts a new video to its site of an author responding to the same question.

The University of Rochester recently acquired the press's last decade of publishing archives, and will hold a celebratory exhibition in Rush Rhees Library's Friedlander Lobby from March through July 29. A celebratory kickoff for the exhibit will take place Wednesday, April 6, 5:30 to 7 p.m., with a group poetry reading followed by a light reception. This event is free and open to the public.