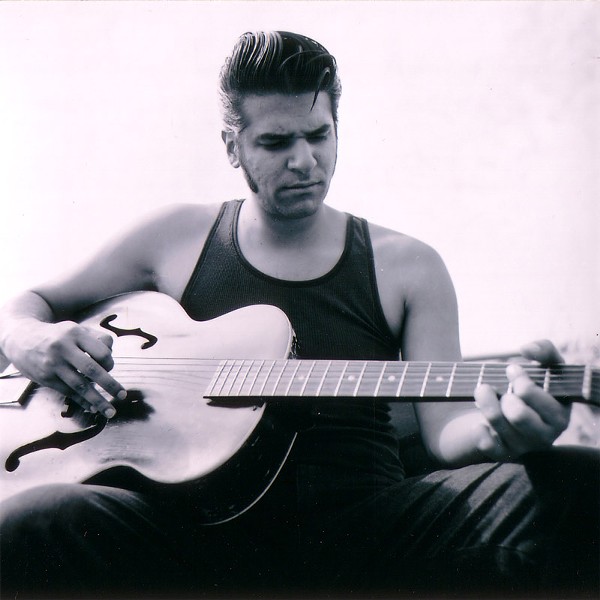 With A Girl Named Genny and Fright Barker and Sons

Straight out of Quebec, Bloodshot Bill is a howlin', snarlin', croonin' great ball of fire. As a frenetic and frantic one-man-band, the Montreal madman captures the essence of primitive rock 'n' roll in between hiccups and some vicious slapback.

Beneath an oil-slicked ducktail that would make an Exxon executive blush, Bloodshot Bill intones salaciously, evoking The King, The Phantom, The Legendary Stardust Cowboy, The Blue Caps, and The Haze, often in the same tune — or even within the same breath.

Not only does he have the vintage sound down, he's got a menacing attitude and psycho-sensual swagger not seen or heard since the late Lux Interior strode the boards. The man gets right to the point — whether he's discussing recreating a vintage sound, the ups and downs of being the member of a one-man-band, or about eating copious amounts of spaghetti.

Bloodshot Bill raises the same kind of hell on his drum throne, pounding out the rhythm with his two feet while wringing blood, sweat, and rockabilly out of his guitar. He sees his lineup of one as an advantage.

"You can go at your own pace always," he says. "But there is nobody else there to help drive on long distances."

He calls it "rockin' hillbilly rhythm and blues from another planet." It is music that had been fermenting in him since his best friend in the first grade turned him on to the bop — and his first gig was born of teenage delinquency.

"It was awesome," he says. "I'd broken a window and had to do some community service. When my social worker found out I was a musician, he set us up to play a benefit show at the local YMCA."

The music he plays now is positively brilliant and something everyone really should see before their trip to the skull orchard. Though the music is generally associated with the era it was born — the 1950's — Bloodshot Bill has managed to keep the look and feel of the strain as well as its underground appeal.

"I guess knowing the roots of something helps," he says.

Since 1998, Bill has released more than 30 albums in the US, Canada, and Europe on assorted imprints, the most recent being "Guitar Boy" on the famed Norton Records label. He's played in close to a million bands, like The Hubcaps, The Guilloteens, The Handcuffs, The Bootlegs, and Heavy Trash with Jon Spencer and Matt Verta-Ray. And he was banned from the US between 2006 and 2011.

Bloodshot Bill is rough raunchy and righteous. And "I can eat more spaghetti than your average trio,'' he says. Get a dose.