Warning: Photo below may be disturbing

Joe Sturnick, a retired captain with the Rochester Police Department, says that he always knew when the blood beneath his feet wasn't fresh; that it masked many more layers below it, sticky and seeping like ink into the floor. And he says that he knew that the smell — tinny like a fistful of pennies — would linger on his clothes, and in his mind.

"How do you really clean up something like that?" he says. "Try to imagine, you're on your hands and knees, scrubbing your deceased loved one's blood out of the carpet."

Twenty years ago, that was what families did because they had no choice. Today, the growing field of forensic cleanup spares families the trauma of such a task, tackling the grim messes left behind by murder, suicide, accidents, and bodies undiscovered until well after death.

Aftermath Services on St. Paul Boulevard in Rochester is one of hundreds of forensic cleaning firms now operating in cities across the country. Established in 1996 and headquartered in Illinois, Aftermath was among the first of its kind, drafting the industry's unofficial guidelines for dealing with issues of employee protection, waste disposal, and cross-contamination.

Rochester is one of Aftermath's 32 locations nationwide, including four in New York State, all serving as dispatch centers for cleanup crews available around the clock. Aftermath also offers courses for companies new to the field; but because the industry bears no specialized regulation or certification process, such training isn't mandatory. It is considered essential by most veterans of the profession, however.

"A housecleaning or janitorial company will sometimes offer this sort of service as an aside," says Tina Bao, Aftermath's senior vice president of marketing. "We do have a general idea of what's happened at a scene before going in, but in a lot of ways we're walking into the unknown. We need to be prepared and properly equipped."

The work is meticulous, even hazardous, she says, and it requires knowledge about everything from the containment of blood and infectious disease to lengthy structural renovations costing tens of thousands of dollars.

The sights and smells can be disturbing to even the most experienced workers, although they seem to agree that far more taxing are their interactions with people suddenly thrust into grief. Sometimes, too, the scene that has been so blighted by violence and tragedy is located in a client's home, and the family is anxious about having to go back there.

"But we often hear from clients that being able to walk back into their homes went a long way toward continuing their healing process," Bao says.

A thorough cleanup can also prevent physical illness from compounding a family's psychological ordeal. No matter how minute, a missed bead of bodily fluid or an overlooked bit of flesh no bigger than a dime can become a breeding ground for germs, insects, mold, and stench.

"You have to follow the blood and get every drop," says Matt Ferro, owner of Kleen Scene, a four-man forensic-cleaning company started in 1998. "A high-powered firearm will send blood, bone, and brain matter clear into the next room. We have to disinfect books, CD's, electronics. We've had to wipe down dishes."

After leaving the military, Ferro began his second career when he bought the business from its founder in 2004. Based in Buffalo, Kleen Scene frequently serves the Rochester area.

"We take comfort in knowing that when [the homeowners] go back, there won't be any trace of what happened, and they can start fresh," Ferro says. "We are fully plugged in with the families from start to finish, and we're there if they want to get some of that pent-up emotion out." 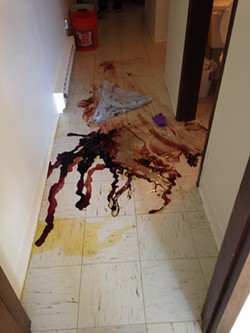 Client Millie Winston says that she was grateful for the compassion that Ferro describes after her brother, Gerard Samuels, killed himself in 2014. Winston, the eldest of seven siblings, was responsible for emptying and selling her brother's house in the South Wedge after his death.

"I never could bring myself to set foot in his house after he died," Winston says. "I couldn't bear to be where I could maybe smell his cologne."

Samuels was battling depression and then lost his wife and his job in the same month, Winston says. His finances suffered, and he feared a foreclosure was looming, she says. He left behind a note, boxed his belongings, put out extra bowls of food for his elderly cat, and then he shot himself with a shotgun that his family didn't know he owned, Winston says.

She and her family consider the aid rendered by forensic cleaners a gift of mercy, she says.

Most people working in forensic cleanup didn't come in cold; they have backgrounds as first responders, starting their careers in the military or in health care. Salary varies by geography and from company to company. Some cleanup companies hire crews on an as-needed basis and may supplement a base salary with per-diem compensation, while others, including Aftermath and Kleen Scene, employ full-time staffs.

Firms are hired by families or by business owners when the job brings crews to a victim's work or to a public place. Companies are referred on the scene, usually by law enforcement officers who carry lists of forensic cleaning firms and their contact information.

Locally, Rochester Police Department's Victim Services, under the coordination of Patricia Huntington-Segal, helps arrange state-funded compensation for cleanup efforts; each client is eligible for up to $2,500 of assistance. Most homeowners' insurance will cover the expense.

Workers assess a scene in person before offering a price quote, and the cost of a job depends on its size and scope. It ranges from several hundred dollars into the many thousands.

Crews wear full biohazard suits and respirators to deal with everything from fingerprint dust to viral agents. And some companies, including Aftermath, offer free psychological counseling to their employees.

Former RPD captain Sturnick, who now teaches criminal justice at Monroe Community College, says that he's not surprised to learn about the free counseling. He carries mental pictures of many of the scenes that he investigated, he says. Some of the images revisit fleetingly, he says, but some of the stories haunt him.

"In general, I was stunned by man's inhumanity toward man," he says. "The things people can do to each other. And I saw the trauma brought to those left behind."

"We would do our best to spare family members sights like that," Sturnick says. "They want to hold the person. We always tried to prepare them: 'Do you want that etched into your memory?'"

While the public has developed fairly sophisticated knowledge of forensics thanks to the proliferation of crime dramas, documentaries, and podcasts, they're still unfamiliar with the step that comes after a body is found and a scene processed. Most are surprised when they're told that scene cleanup was once the sole responsibility of loved ones, and not of those in some official capacity, Kleen Scene's Ferro says.

Two decades ago, the field of forensic cleanup was practically nonexistent, according to a 2012 report by CNN.com. Such businesses may be more commonplace today, but public knowledge of them is still limited: a reality perhaps based in the discretion that's characteristic of the companies' owners.

Rarely does a forensic-cleaning firm advertise, Aftermath's Bao says; they rely instead on websites, word of mouth, and on-scene referrals. Client anonymity is fiercely guarded, she says.

The public's squeamishness about the nature of forensic cleanup work can make for awkward cocktail party introductions, and even, as Ferro learned shortly after buying Kleen Scene, a bit of backlash. Some accused him of sensationalizing real-life gore for the sake of sales after he rented a billboard to market his services, for example, he says. He says that he hoped that it was tastefully done, but that he got calls from people who wanted to know if it was a joke.

"The common philosophy in this field is, never do we wish to, in any way, put someone's tragedy on display," he says.

Paramedic Georgia Whelan of Irondequoit has volunteered for a half-dozen area EMT agencies over nearly three decades and says that she knows what it was like before forensic cleaning companies existed. She says that she always felt wrenched by the thought of loved ones seeing what was left behind: the visual and olfactory artifacts of violence and terror.

"So I usually tried not to imagine what that was like for the deceased's family and friends, having to replace the way they wanted to remember someone with what they wouldn't be able to forget," she says. "It was like a kick to the gut after they'd already been knocked to the ground."

Empathy is a common trait of those "called" to the field of forensic cleaning, Kleen Scene's Ferro says, but they must also learn to keep a clinical focus on the task at hand; they risk early burnout if they become personally adhered to people's pain.

"There are always scenes that come to mind, but it's not often the physical violence that stays with you," he says. "It is the emotional aftereffects: the reactions of the parent, the sibling, the spouse that hits you the hardest. Heartbreak is the most constant element we see in our jobs."

Some names in this story have been changed.