He pressed the safety on the gun and placed it on a table in the stall before turning to me and the rest of the group.

“Praise God and pass the ammunition,” he said.

Adell, 30, was a big Black man in his element — loading guns, sharing ammo, and dispensing shooting advice — at The Firing Pin indoor shooting range in Bergen. He shoots for sport, for fun, and for protection.

The Firing Pin, a busy spot off Interstate 490 on the outskirts of Monroe County, is home to the Rochester African American Firearms Association, or RAAFA, which provides gun and self-defense training mostly — but not exclusively — to African Americans like me.

The growth in the number of organizations like RAAFA in the United States has mirrored a surge in gun sales to Black people fueled by the uncertainty of the pandemic, skyrocketing violent crime, and polls showing that half of Black Americans feel they can’t trust the police to treat them fairly.


These groups are not militant, their organizers insist, but are rather an outgrowth of a conclusion reached by many Black people that they have been left with no choice but to exercise their Second Amendment right to protect themselves, fearing that no one else will.

“It is our fundamental belief that the duty of the people is to arm and educate themselves in order to protect and defend themselves,” reads a statement on the RAAFA website, which claims the group has received an “overwhelming interest and response” and is now the largest of its kind serving upstate New York.

“We’re not criminals. We’re not a gang,” said Adell, a U.S. Concealed Carry Association and National Rifle Association instructor. “We’re not any type of militia or military or militant type of group. We’re a community-based organization that offers training and education.”

The group’s philosophy is that not every sign of trouble requires a gun. Its instructors teach de-escalation techniques as well as hand-to-hand combat maneuvers.

“Every day is not a gun day. The firearm is the last resort, and that’s what we teach people," Adell said. "The best thing to defend and combat the violence is using the mind and using the heart — and sometimes the mouth, too.”

But for me, that day was a gun day. 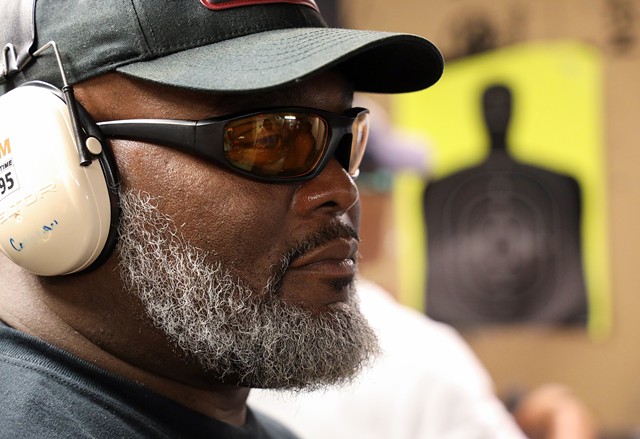 After crash courses on gun safety, I signed a waiver and headed to the range floor with five RAAFA members, including an educator, a counselor, and a retired Monroe County Sheriff’s Office sergeant, Mark Cochran, who is the group’s chief instructor.

There, I held a Ruger Pistol Caliber Carbine rifle and Adell and Cochran helped me adjust my stance. Adell advised me on the importance of repeating my approach with every shot, like a quarterback’s throwing motion or a point guard’s jump shot.

Within a half-hour or so, I improved, learning to use a scope and to breathe easier with a butt of a rifle lodged against my shoulder. It was tough to not anticipate the explosion out of the barrel, let alone the other gunshots on the range, but I got the hang of it.

If data is any guide, moments like these are happening around the country with greater frequency. 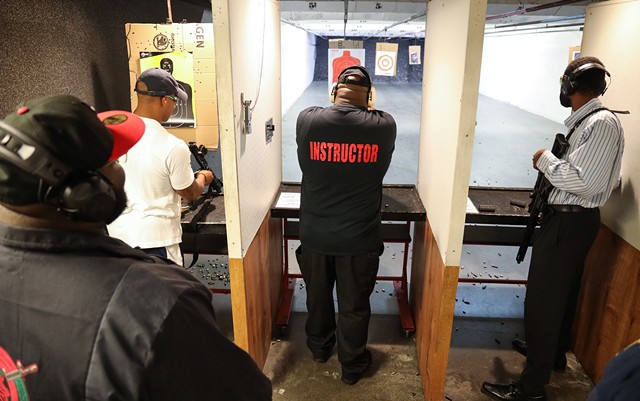 Gun-related background checks by the FBI have been steadily climbing for decades, but they surged to new highs in the last 18 months, according to agency data.

The almost 40 million checks conducted last year represented a 40-percent increase over 2019, and the nearly 28 million checks done through August of this year are on pace to shatter the record.

The checks do not reflect the number of guns sold, but the National Shooting Sports Foundation estimates that slightly more than half the checks done last year were conducted on new gun owners, many of them women and people of color. The group polls firearms dealers and figures gun sales to Black Americans are up 58 percent, the largest jump of any demographic group.

Demographic data on gun owners is hard to come by in New York, but anecdotal evidence suggests the same trend is playing out in Monroe County.

Applications for pistol permits this year through early September were up 168 percent over the same period last year, according to the County Clerk’s Office, which manages the requests. The increase was 216 percent among residents of Rochester and 154 percent in the suburbs.

In the past, getting a permit typically took six to nine months. But the backlog is so great now that County Clerk Jamie Romeo said her staff is telling most applicants to expect to wait a year.

“I think 2020 was an unfortunate perfect storm, where there were lots of other outside influences that for whatever reason made people interested in gun ownership,” Romeo said. “It's created a swell that we are not necessarily seeing dip in at this moment.”

“[T]here’s just a lot of people that are looking for ways to have some personal safety,” she went on, “and simply owning a firearm won't make an individual safer, especially if they don't know how to use it.” 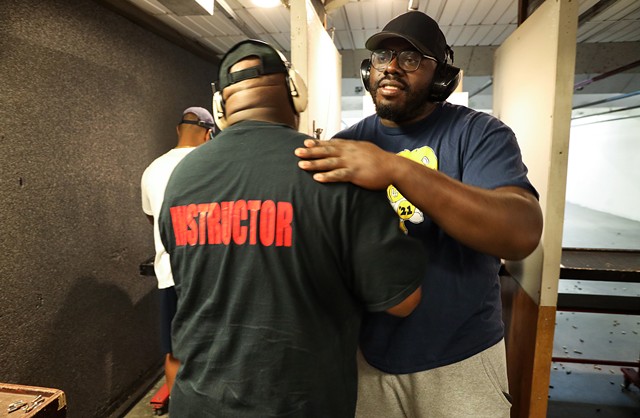 RAAFA has grown as well.

When the organization was founded last November by Adell and fellow small business owner Michael Nix, it served a handful of members. Today, Adell and Nix count a few dozen members, about half of whom are women.

Nix, a 54-year-old Marine veteran, grew up around guns. He said part of the appeal of groups like RAAFA for new Black gun owners is learning from instructors who look like them, like he did.

“My grandfather was a hunter,” Nix said. “I identify (with gun owners) because I grew up in the house and the house was exposed to that type of activity. But the average kid that grew up in a neighborhood with me, doesn't.

“There’s the issue of trust,” he continued. “We tend to be more willing to accept something from someone we trust. When you're here, you're getting educated by someone who can relate to your struggle.” 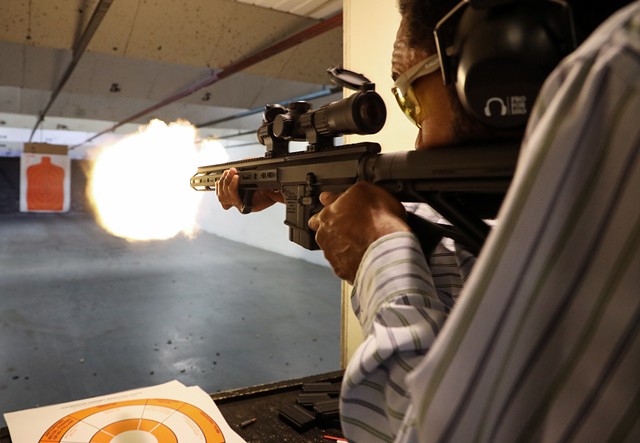 Jasmine Barksdale, 28, a call center supervisor from Rochester, was among the first members of the group.

Barksdale said fear kept her away from guns for most of her life, but joined RAAFA after learning about it from a friend. Now, she does community outreach for the group, dubbing herself a “2A person” — a “Second Amendment person.”

“Like basically most Black women,” Barksdale said, “I wasn't raised in a home that was firearm-savvy.”

Barksdale said she was motivated to pick up a gun by a different kind of fear: Being a single mom of an 8-year-old daughter.

Phillip Smith, founder of the 40,000-member National African American Gun Association, said Barksdale’s sentiment is common, particularly in light of the volatility of the last year. 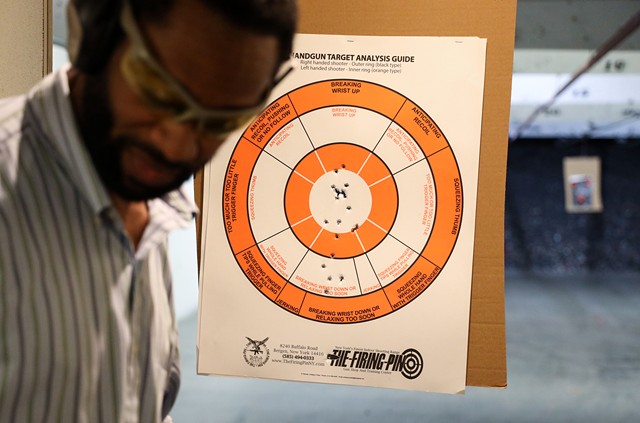 Citing the long history of gun control laws in the United States that impinged the rights of African Americans to own guns, Smith said that Black people are still maligned for wanting access to firearms.

Images of Black people with guns, he said, have always been negative. That is something that both the national and local gun groups have worked to counter.

“Other communities have guns all the time,” Smith said. “The Jewish community, the Asian community, the white community, and nobody bats an eye. We get questioned. Why is it so different for us?” 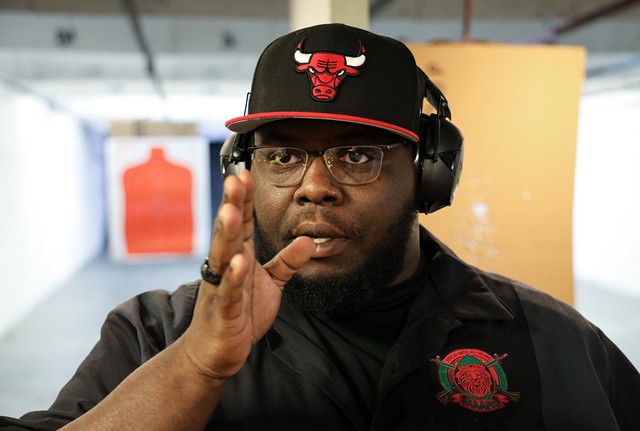 The last year-and-a-half has seen rapid change — lockdowns, mask mandates, civil unrest — and a spike in violent crime in cities across the country.

Homicides and aggravated gun assaults hit peaks in the summer of 2020 and continue to hover above pre-pandemic levels, according to the National Commission on COVID-19 and Criminal Justice.

Shootings and slayings in Rochester are at least at 10-year highs. Last year, the city had its first riot in half a century, followed by months of civil unrest marked by clashes between protesters and police over the way the city handled the death of Daniel Prude, a Black man who suffocated while in police custody. 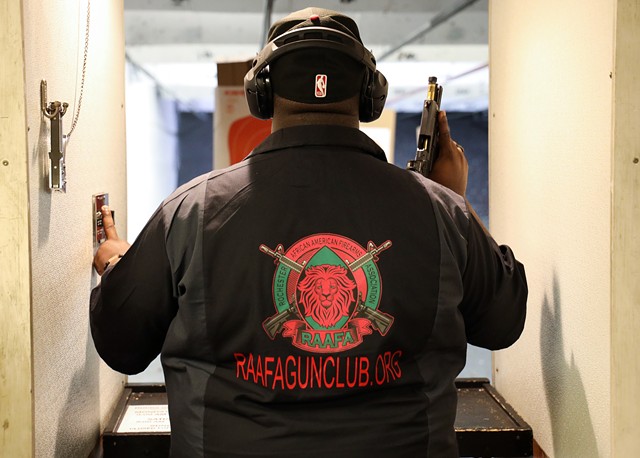 Civil unrest is not permanent. Violent crime ebbs and flows. Pandemics are temporary by nature.

Adell said these conditions awakened people to their vulnerability and played a role in the rise of gun ownership and growth of his group. He asserted that Black gun groups aren’t a fad, but rather the latest incarnation of a rarely acknowledged American tradition.