Black and White and great all over 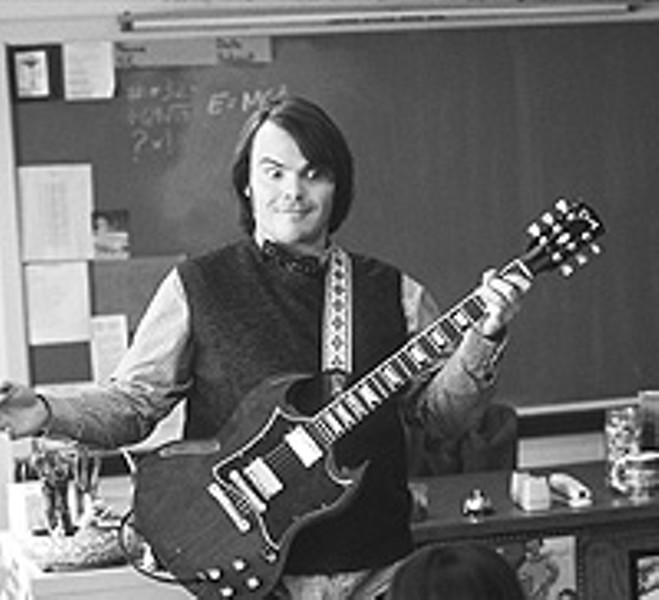 Leave it to edgy indie auteurs Richard Linklater (director of Waking Life) and Mike White (screenwriter-star of The Good Girl and Chuck & Buck) to take a genre that's been completely rubbed into the ground and left for dead by hack after hack and make it into something fresh and exciting, not to mention really good. That's just what they do with School of Rock, a picture that looks like another empty Jack Black vehicle but turns out to be an insanely entertaining blend of the musically gifted kids from Camp, the slightly maniacal yet eager-to-teach educator from Dead Poets Society, and the private school uniforms (not to mention the hip street cred) from Rushmore.

Black stars as Dewey Finn, one of those perpetually broke, 30-something burnouts who is still trying to make it as a big-time rock star when he should be worrying about getting a real job to pay his bills. Dewey lives with his best friend and former bandmate-turned-substitute teacher Ned Schneebly (White), as well as Ned's bitchy, upwardly mobile girlfriend Patty (Sarah Silverman), who despises the very sight of our hero even when he's on time with the rent.

When Dewey is booted from his own band for being too flashy with the guitar solos, he realizes the big $20,000 top prize at the upcoming Battle of the Bands competition has become a pipe dream. It's a situation that makes it even easier for Dewey to pretend to be Ned when the phone rings in search of a substitute teacher for the fifth-grade class at Horace Green Prep, the best private school in the state.

Dewey figures he can clip on his finest bow tie, show up, and sleep off his hangover while collecting a fat paycheck. But that's not in the cards, as Dewey is cursed with a class full of Lisa Simpsons --- grade-grubbers in constant need of evaluation and reassurance that they'll each get into the Ivy League university of their choice. They demand to be educated, and Dewey eventually complies after spying their musical abilities in band class. The rest of the film finds Dewey schooling the kids in the ways of Led Zeppelin and AC/DC, while forming a pint-sized rock combo disguised as a "top secret" class project with that big Battle of the Bands payday as its lofty goal.

Clichés abound, as they often do in movies about either a jaded teacher or a classroom full of apathetic kids, but Linklater, White, and especially Black find a way to keep things perky while never once allowing their story to drag. A subplot involving Dewey's hysterical yet somewhat heartbreaking manipulation of Horace Green's principal (played by a very funny Joan Cusack) would derail similar films, but in Rock, it works remarkably well.

Mostly, though, Rock is about Black and the kids. This is a picture that would not have worked with any other actor in Black's role. He's deliciously manic in an extremely physical performance that literally made me tired just to watch. Do yourself a favor and pay attention to one of Linklater's long takes of Black doing his crazy Jack Black thing and imagine how grueling it must have been to do more than once or twice.

The kids make their own music in Rock, though judging from the picture's press conference at the Toronto International Film Festival, I don't think many of them were doing much acting (keyboard player Robert Tsai isn't doing a funny Asian accent --- it's for real). Rock is bolstered by great opening credits, a fun soundtrack, and musical contributions from Shudder to Think's Craig Wedren (he wrote the score) and The Mooney Suzuki (they wrote the band's anthem).

In The Rundown --- actor-turned-director Peter Berg's follow-up to the delightfully morbid Very Bad Things --- wrestler-turned-actor Dwayne "The Rock" Johnson makes a good case for people to start taking his new career more seriously than those of "Rowdy" Roddy Piper or "Hollywood" Hulk Hogan. He plays a "retrieval expert" named Beck who is quick and powerful enough to, quite literally, defeat the entire offensive line of an NFL team, should the situation ever present itself (and it does). But Beck is also an aspiring restaurateur who agrees to perform the heavily clichéd One Last Job for his vile boss, Walker (William Lucking).

The job finds Beck headed to Brazil, where he is to bring back Walker's son, a college dropout named Travis (Seann William Scott) who is after a potentially bogus Holy Grail of archeological wonderment called El Gato Diablo. Which means the rest of the film plays like a double exposure of Midnight Run and Romancing the Stone, with Rosario Dawson as a third wheel who helps the boys take on the ruthless slave driver (Christopher Walken) of a mine town quaintly dubbed Helldorado.

The shockingly restrained Johnson is legitimately charismatic here, merely because he isn't trying to be The Rock (he doesn't raise the People's Eyebrow once!). Berg's direction is solid, if a little too flashy at times. Dawson's inflection is the least Brazilian I may have ever heard, while Ewen Bremner contributes one muddled and funny enough to be the finest unintelligible movie accent since Brad Pitt's in Snatch (which, coincidentally, also featured Bremner).