Bites for barkers at Bones Bakery


BY COOPER AND PENNY (TRANSLATED BY CHRIS THOMPSON)

My name is Cooper McVay (@gimmethecoop). I have a nice home, a great family, and life is quite good. Only one thing is missing: I need love. Sure, I am only about a year old, but why not start looking now? I am not one to waste my 1's running around sowing my wild oats only to wake up one morning and realize I'm 10 years old and alone! I plan on having a full life, and why not share that experience with someone special?

So I decided I would go out on a date with a nine-month-old German shepherd named Penny. The spot we agreed on was Bones Bakery, a bakery for dogs right in the middle of the city. It is even friendly to our pet humans. It didn't take much to convince my human Renée to chaperone. She enjoys a fun adventure. I thought Bones would be a great place for her to roam around and play with Penny's humans while we get to know each other. 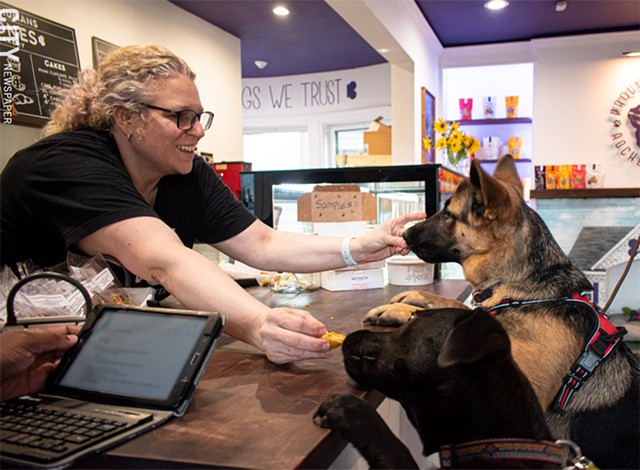 I was a little bit nervous as I climbed the steps to Bones Bakery. Normally I would bring flowers or a stick, but I forgot. Penny may be younger than me, but she is twice my size. I'm just a black Lab mixed with a smaller breed. Would that turn her off? I still have my piercing puppy eyes! More nerve-wracking is that Bones is the hottest spot for single dogs. What if the place is too expensive? What if something I eat makes me sick? Most doggie treats are not as good for me as they purport. How embarrassing it would be if I threw up in front of Penny and then for her to lick it up! I was suddenly a furry bundle of nerves.

As I entered Bones Bakery, there was Penny. She is...a talker. She kept telling me about all the people who looked suspicious, who she had to ward off from her humans, and all the other dogs who ventured into the shop before I got there. We sat down in front of the chairs, and I ordered us Puppacinos (goat's milk and whipped cream with a cookie on top). They were delicious! I then ordered a Dognut ($3) and a Puppy Cannoli ($2.75) for us to share. Penny would not stop talking about what the other dogs were eating, so I was a little bit distracted. Still, I was impressed with the establishment.

Bones Bakery also has human-safe food. I bought my human's friend Chris an apple muffin ($3). Additionally, they serve coffee, which is a dark bean-based beverage traditionally served hot. The coffee beans are from New City Cafe, and there is a nitro cold brew on tap from Glen Edith. I think everyone was happy with their treats, and I was quite satisfied with my date. I had no reason to be nervous. Penny and I will likely see each other again, if I can get a word in of course.

I know what you are thinking: what is a nine-month-old German shepherd doing going on a date with a short, year-old black Labrador? But I happen to like shorter dogs. And sure, the age difference may seem like a big deal, but in the long run, we're only a few months apart. And our humans get along great. Besides, he still has very sweet puppy eyes. I was impressed that he wanted to go to Bones Bakery on our first date. I've heard much about it since it opened back in April.

I got there first, and I was so excited to be there, I HAD to tell everyone about the selection of goods. I told everyone who walked in the door. Cooper was more preoccupied with burying his face in the food than talking, though. I learned so much about our meal from listening to our pet humans chatter away. The shop owner, Dani Lawson, committed herself to only using natural ingredients in her creations. She doesn't use any of the preservatives that mass-produced dog foods and treats have. There are plenty of oats, peanut butter, and eggs, though. The "chocolate" on our Dognut is actually carob, which is good, because I do not want to die. The treats that Lawson makes are so popular that she makes regular deliveries to Park Ave Pets, all 17 Country Max locations, and she hosts pop-ups in cafes throughout the area.

For the human food, Lawson even makes her own pumpkin syrup for the tea drinks. Instead of the traditional syrups found in some cafes (made of sugar, a color and number combination, and a hint of whatever flavor they purport to be), Lawson's syrup boasts real pumpkin, cinnamon, nutmeg, and other spices associated with autumn.

She told my human that she loves dogs and coffee. Lawson has years of experience as a pastry chef, and leaving her previous job at Upper Crust Cakery was the best time for her to start something on her own. She wanted to be able to do something that would allow her to bring her dog to work, and she wished for dog treats that are truly healthy for her dogs. The bonus is that she gets to see more dogs every day! I hear that humans are a good stress reliever for dogs. Four dogs came with their pet humans while Cooper and I sat and chatted. After the other parties left, Lawson called us to the checkout counter, and she gave us sample pumpkin muffins! They were so delicious, I went back for seconds and thirds.

Bones Bakery turned out to be the best place for a first date, boasting delicious, healthy food for us and sweet treats for our humans, all reasonably-priced. This is a good thing, since neither of us have pockets. I shall return to Bones Bakery. Whether or not I go with Cooper...we'll see.