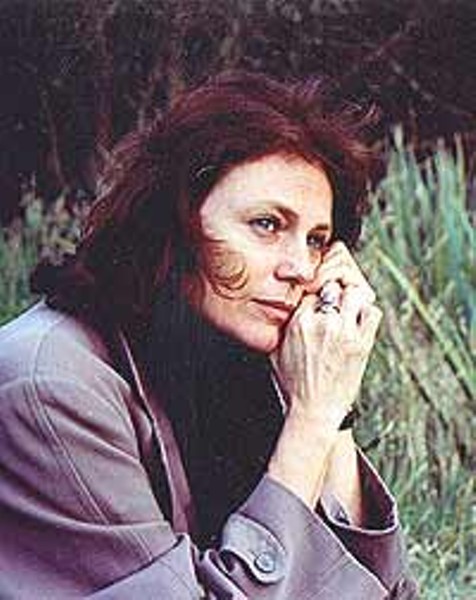 "There just aren't any good roles for women." Now there's a complaint you don't hear too much anymore. It may no longer be an issue when actresses like Sissy Spacek, Nicole Kidman and Renée Zellweger --- all of whom did amazing work last year --- still go home empty-handed at the Oscars, while Denzel Washington wins simply for being cast against type.

In 2002, the three best performances have come from women (Jodie Foster in Panic Room, Andie MacDowell in Harrison's Flowers, and Diane Lane in Unfaithful). A fourth, Jacqueline Bisset, makes a pretty serious case for joining their company in The Sleepy Time Gal, which screens this Saturday evening at the Dryden Theatre. Gal was a festival favorite that couldn't find a distributor and debuted on the Sundance Channel about four months ago.

It's too bad the rest of Gal doesn't ascend to the level of Bisset's performance, though. She plays Frances, a free-spirited, middle-aged woman we meet while she visits Revolutionary War sites in New York City with her son, photographer Morgan (In the Bedroom's Nick Stahl). Before long, she's holding her stomach and complaining of a bloated feeling, which we eventually learn is terminal cancer.

In the meantime, Gal's second story thread involves a New York City-based corporate lawyer named Rebecca (Martha Plimpton) who is sent to Daytona Beach to supervise the takeover of a radio station. Knowing her relationship with her current boyfriend (Mulholland Drive's Justin Theroux) is kaput, Rebecca strikes up a friendship with Jimmy Dupree (Frankie R. Faison), the owner of the station.

The two stories don't seem like they have a thing to do with one another, but it turns out Rebecca is really the daughter Frances gave up for adoption many, many years ago. Because she's on her way out and trying to put her life in order as she looks back at her past with teary, nostalgic eyes, Frances yearns to contact her long-lost daughter.

Rebecca, too, feels the emotional pull of finding her birth mother and doesn't realize how close she is, as Frances used to host a late-night jazz show at the Florida radio station she's about to capture.

Unexpectedly, the two threads never cross. But they do share some nice similarities: both Rebecca and Frances give thought-provoking soliloquies on life while precariously perched high above the ground. In addition to hopping back and forth between at least a half-dozen locations and even more time settings, Gal features stilted, overintellectual dialogue and a pace as drowsy as its title, barely rising above the type of film you'd see on the Lifetime Network.

The good news, in addition to Bisset's performance, is that writer-director Christopher Münch doesn't reach for the obvious buttons that a weepy mainstream cancer film, like Stepmom or Life As a House, would push in an all-out attempt to make everyone in the audience cry their eyes out. (Münch himself will appear at the Dryden Theatre to discuss the film after Saturday's screening.)

It's also very nicely photographed by Rob Sweeney, the Sundance-winning cinematographer of Münch's Color of a Brisk and Leaping Day. Gal is at least partially autobiographical, which might explain why it's set in the early and mid-'80s instead of present day.

Still, it's hard to watch Gal and not think how much it reminds us of something Ingmar Bergman would make. Coincidentally, Bergman's Oscar-winning Cries and Whispers, which is about a woman dying of cancer, is playing this month, on the same cable channel on which Gal made its recent debut.

With my rudimentary understanding of French, The Lady and the Duke  --- or L'Anglaise et le Duc --- translates into the much funnier-sounding The Angel and the Duck. Sadly, there isn't one angel or a single duck to be found in the latest offering from Eric Rohmer, the 82-year-old French new-wave director best known (lately, at least) for his mind-numbing, four-film series called Tales of the Four Seasons.

Duke is, instead, a somewhat interesting look at the effect the French Revolution had on the odd friendship between the two eponymous characters.

We see much more of the Lady than we do of the Duke, but that's because the film is based on her memoirs (blandly titled Journal of My Life During the French Revolution). She is Grace Elliott (Lucy Russell, from Christopher Nolan's The Following), a Scottish aristocrat who, previous to the opening bell, has established herself as a semi-professional mistress. Having moved from the Prince of Wales to the Duke of Orleans (Jean-Claude Dreyfus, from Jean-Pierre Jeunet's Delicatessen and City of Lost Children), Grace is now single, but remains close friends with the Duke.

The sides that two characters take in the Revolution are surprising, considering their backgrounds. Though she's technically a Brit, Grace is staunchly pro-aristocracy and often bursts into tears at the mere thought of her friends being slaughtered by common peasants. The Duke, meanwhile, considers himself more a man of the people than privileged royalty. He does little to hide his contempt for King Louis XVI (his own cousin!), Marie Antoinette and just about everyone else being chased out of their fancy digs and led to either prison or the guillotine. The witty political banter between the two are the film's highlights, at least when it comes to the generally dry dialogue.

There are some clever set pieces that break up the monotony, like the scene in which Grace decides to hide a nobleman (Léonard Cobiant) she despises from a band of soldiers that want to pull off his arms and legs. Rohmer directs with a stationary camera and does very little editing, which only makes Duke seem even longer and more unwieldy than it actually is.

In the film, Night Moves, Gene Hackman's character compared watching Rohmer's work to watching paint dry. Perhaps that slam gave Rohmer an idea that took 25 years to germinate. Instead of filming Duke in and around a modern Paris that looks nothing like it did during the days of the Revolution, Rohmer commissioned artist Jean-Baptiste Marot to paint 37 different backgrounds of Paris in the 1790s, which were then digitally superimposed behind the film's actors, who were shot in front of blue screens.

Rohmer? Blue screens? Digital filmmaking? The next thing you know, Steven Soderbergh will remake a mediocre film packed to the gills with big Hollywood stars.

The result is as visually arresting as it is distractingly odd. After an hour or so, I was so disinterested in the story and so enamored of the visuals, I began to quietly plead with the screen to shift the action outdoors so I could enjoy another Rohmer-Marot combo deal of delicious eye candy. Beyond that, there isn't much here, unless you're really into French history.

'The Sleepy Time Gal,' 8 p.m. Saturday, July 27 at the Dryden Theatre, George Eastman House, 900 East Avenue. $5.50; $4.50 members and students. 'The Lady and the Duke' opens Friday at the Little Theatre, 900 East Avenue. For more of Jon's movie ramblings, visit his site, Planet Sick-Boy www.sick-boy.com, or listen to him on WBER's Friday Morning Show.