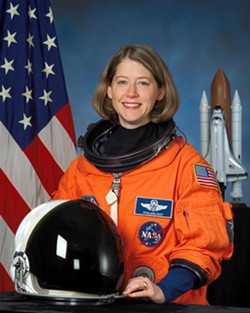 A former NASA astronaut with Rochester roots has been nominated by President Joe Biden to a top spot with the space agency.

Melroy is one of only two women to command a space shuttle, and she's logged more than 38 days in space. All three of her missions involved helping to build the International Space Station.

Melroy, 59, was born in Palo Alto, California and graduated from Bishop Kearney High School in 1979.

According to her NASA bio, after serving more than two decades in the Air Force and as a NASA astronaut, Melroy took on a number of leadership roles, including at Lockheed Martin, the Federal Aviation Administration, and the Defense Advanced Research Projects Agency.

Last year, it was announced that Melroy would be inducted into the U.S. Astronaut Hall of Fame at the Kennedy Space Center in Florida. Because of the pandemic, that ceremony was delayed, and it has now been scheduled for this coming November.

On Twitter on Friday, Melroy said of her nomination as deputy administrator at NASA, “It’s a great honor to be nominated by @POTUS to support @SenBillNelson and help lead NASA. The agency is critical in America’s fight to combat climate change and maintain leadership in space.”

It’s a great honor to be nominated by @POTUS to support @SenBillNelson and help lead NASA. The agency is critical in America’s fight to combat climate change and maintain leadership in space.

Melroy also tweeted, “This year, NASA will embark on the 1st human deep space exploration program since Apollo, launch the James Webb Telescope, test the first all-electric X-Plane, and further technologies to take humans to Mars. The way to do it is as a team that honors diversity in every dimension!”