Currently on view at Eastman Museum, Taryn Simon's "Birds of the West Indies" is a two-part undertaking that connects Ian Fleming's famous character with the American ornithologist whose name Fleming borrowed. In her oeuvre, Simon links the real James Bond's captured birds with 007's pursuit of "birds," she becomes a hunter herself, and invites her audience to get in on the action.

The first room of the main galleries holds Simon's, "Field Guide to Birds of the West Indies." "In this part of the series, she becomes an ornithologist of the James Bond movies," says Lisa Hostetler, curator in charge of the Department of Photography at Eastman Museum. In 2012, Simon watched 24 Bond films, and painstakingly isolated each and every scene that a bird or birds appeared.

As many of the scenes were filmed outside, the appearance of most of the birds was unanticipated, scenic white noise. Simon snagged a still from each of these chance-sightings -- the birds are often only specs, smudges, or blurs against architecture or an empty sky -- and organized the scores of black and white prints into frames, organized by the country in which the film took place.

So each frame might hold dozens of birds from different films, but from the same country, grouped the way an ornithologist would. There is some play of artifice, here, as the story's setting doesn't necessarily reflect the filming site.

Though the stills are detached from their context, these happenstance captures trip us into the world of these stories, where real-life creatures flew onto fictional sets, unaware of the narrative, and interacted with the players. "00:04:06 Istanbul, Turkey, 2012" in particular perfectly conveys this tension between reality and fiction: hands emerging from off-frame aim a gun at a ducking, blurred crowd, and a flock of birds, likely disturbed by the shot, rises away in a panic.

Simon refocused the viewer's gaze away from the Bond franchise's alluring agents to her own desiderata, and only the vaguest whiff of luxury, power, violence, or sex is present in these largely unassuming images. 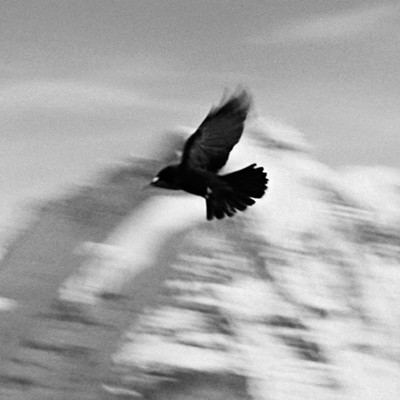 In the center of the room, a long, sleek display case holds images of some of the bird skins the real James Bond collected, copies of some of his letters and lists, and other archival materials related to the ornithologist.

While the work in the first room of the exhibition is presented in a categorical, scientific, understated manner, the images in next room speak of sleek drama. This other half of Simon's exploration of Bond, "Birds of the West Indies," presents another photographic inventory, this time of the women, weapons, and vehicles -- the key, interchangeable elements featured in the Bond films from 1962 to 2012.

"That's sort of the power of this series," Hostetler says. "They continually engage us with this combination of familiar tropes that we see."

A single line of identical black frames rings the entire space, with Simon's own shots of the glamorous Bond women, who she tracked down and asked to pose against a white backdrop. The frames are empty in the cases where the actress rejected the invitation to participate. Some images of the ladies repeat, labeled with different dates for their different appearances in films.

Simon also hunted down and photographed iconic weapons and vehicles against a black background. She assigned a number to each image, and runs the numbers through a randomizer that changes the order of the images for each showing of the work. Viewers are thus engaged in their own hunt for their favorite Bond girl among lethal weapons and stylish automobiles.

This collection also includes Simon's film, "Honey Ryder (Nikki van der Zyl), 1962," which documents the most elusive (in a sense) of Bond's "birds." From 1962 to 1979, van der Zyl, was an unseen and uncredited performer who provided voice dubs for more than a dozen major and minor characters in nine Bond films. Here, Simon presents the woman reading her lines on camera for the first time.

In the third room of the main galleries, visitors can sit and peruse all of the books that Simon has produced. This portion of the show shouldn't be overlooked -- each of the books are absorbing in their own right, and each present that uneasy tension of reality and fiction that Simon so loves to explore.

Taryn Simon will give a talk at Eastman Museum on April 27. The Dryden Theatre will host a James Bond film series through April and May to complement the exhibition. For more information, visit eastman.org.