Bill Stephens draws from within

"Three Ancestors," an ink drawing by Bill Stephens as part of his show, "Drawing from Within,"

"Bill Stephens: Drawing from Within"

Artist and educator Bill Stephens retired in 2014 after 40 years of teaching art at Webster Thomas High School. "Since the day I retired I've been drawing every single day," he says. This practice has culminated in a solo show of his work, "Drawing from Within," currently on view at Williams-Insalaco Gallery at FLCC.

Stephens's lovely, meditative work is based on natural forms such as pods and hedgerows. He takes inspiration from things he finds on and around the property he shares with his wife, artist Jean Stephens, in Honeoye Falls, and on trips to the Southwest. "That has had a major influence on my work — not only the landscape, but the native spirit," he says.

Stephens grew up in the small town of Lyons and spent a lot of time rambling out in the country. "Land was always a healer for me," he says. "The day my father passed away, my mother said, 'Can you go do something?' So I went out for a ride in the country. I came back and felt great. I just took it all in."

Though Stephens doesn't approach each piece with a definitive plan in mind, his meditative daily process prepares him for approaching the fresh, empty surface. He rises to greet each day between 4 a.m. and 5 a.m., sits quietly, and then writes. "And then I sketch, and then I'll go to the studio. It's kind a primer for the day."

The ink drawings are created from pure intuition, and result in wonder-filled surfaces of texture and pattern, with forms emerging that seem to have a presence. "I don't start with any idea; I just start," he says. "It happens as it happens. It evolves."

The work also includes a few watercolors based on his trip to Santa Fe last summer. "I was really affected by the color out in the Southwest, especially the warm-cool extremes," he says. But these extremes manifest gently, in temperature differences between glaring light and deep shadow, and the softness of figural forms against hard stone.

The natural forms he renders are positioned upright, so that they have a sort of human presence, instead of merely laying prone in the landscape. And his new series included in the show, "Spirit Guides," incorporates the figure even more overtly, where as it was only hinted at in early work.

Slideshow "Bill Stephens: Drawing from Within" 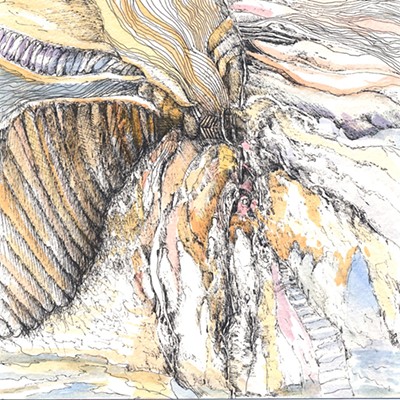 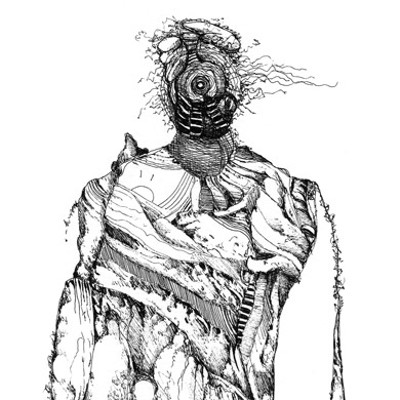 "Bill Stephens: Drawing from Within"
By Rebecca Rafferty
Click to View 6 slides

His wife, Jean, is a naturalist painter who, he says, has always been one of his influences. "It's nice when you can get a knock on the door from your wife, and have a critique, or just share in what we're doing," he says. "That's a rich thing." Jean also staged this show.

Stephens is adamant that the learning process never ends. Since retiring, he's been taking workshops with Peter London at the Kripalu Center for Yoga and Health and at Zen Mountain Monastery, learning from Sister Jody Kimmel, who teaches students to draw with pigment they make from foraged plants.

It stands to reason that a person who spent so many years interacting with others in the classroom would feel a bit lonely after retiring, so Stephens has been spending a lot of time at other artists' studios, and meeting with them for coffee at Oxford Gallery and Makers Studio. These sort of informal art salons include artists Robert Marx, Jack Wolsky, Tom Insalaco, David Dorsey, and others. He also keeps in touch with former students, such as Ray Easton, Todd Stahl, who are both working artists.

"We just talk about what we're doing, and I'm finding that artists are somewhat isolated," Stephens says. "It's rare to get into an artist's studio and be able to have exchange. It's another way to teach and to learn."

Although he's going to turn 70 next year, Stephens has embraced Instagram as a powerful medium for connecting with other creatives and receiving feedback. Some of his younger followers will post encouraging comments that amuse him, using the youthful vernacular like, "that's so dope," he says with a laugh. "All that I post is my art, they don't know how old I am."

A closing reception will be held Saturday, January 14, from 1 p.m. to 4 p.m. The gallery will be closed on Monday, January 16, in observance of Martin Luther King Jr. Day.