Bijaya Khadka builds the America he dreamed of as a refugee

PHOTO BY JACOB WALSH Born in a Nepali refugee camp, Bijaya Khadka came to Rochester in 2009 at the age of 17. Today, through his non-profit House of Refuge, he aims at helping other new Americans find the life in America he once dreamed of.
Bijaya Khadka was 17 when he and his family left the refugee camp on the eastern edge of Nepal in 2009 to seek a better life in the United States.

Khadka, who had known no other life outside the bamboo and plastic huts of the camp erected on the banks of the Timai River, dreamed of America with wide eyes. He imagined a country free of poverty, free of crime, and full of opportunity for everyone. A “second heaven,” as he called it.

But when his family settled in northwest Rochester, Khadka’s vision was quickly shattered.

“What was going in my mind was I was thinking people had sold us somewhere else,” Khadka said. “I thought the place that I’m entering into was not America.”
It was a confusing time for Khadka, imbued with fear and anger at the realization that America was a dichotomy — a prosperous country with widespread homelessness, poverty, racism, and violence.

Now at 29, Khadka is on a mission to help build the America he once fantasized about through the House of Refuge, a volunteer social services organization he founded in 2015 to connect refugees to education, employment, and other resources.

His work caught the eye of Mayor Lovely Warren, who recently appointed Khadka as chairperson of the city’s New Americans Advisory Council, a coalition of Rochester’s refugee services organizations tasked with ensuring their interests stay on the radar at City Hall.

A SEARCH FOR A HOME

He wanted a place to plant roots like the ones his parents had had in their native Bhutan, a landlocked country sandwiched between China and India in the eastern Himalayas, before they were exiled to nearby Nepal.

His parents were Lhotshampa, an ethnic minority of Nepali-speaking Bhutanese people who were effectively declared illegal aliens under the “one nation, one people” policy imposed by the country’s King Jigme Singye Wangchuck. By 1990, schools nationwide were barred from teaching in their language.

When some Lhotshampa demonstrations to protest the discrimination turned violent, the Bhutanese military escalated the hostilities and began mass deportations. Khadka’s parents were among an estimated 100,000 Lhotshampa to be expelled to Nepal.

But the Nepalese government refused to assimilate the Lhotshampa, rendering them stateless. Khadka was born in a refugee camp there and raised as a man of no country.

To Khadka, America represented the chance to fit in somewhere free from persecution. But in Rochester, he and his family and countless other refugees found, the discrimination and maltreatment continued. 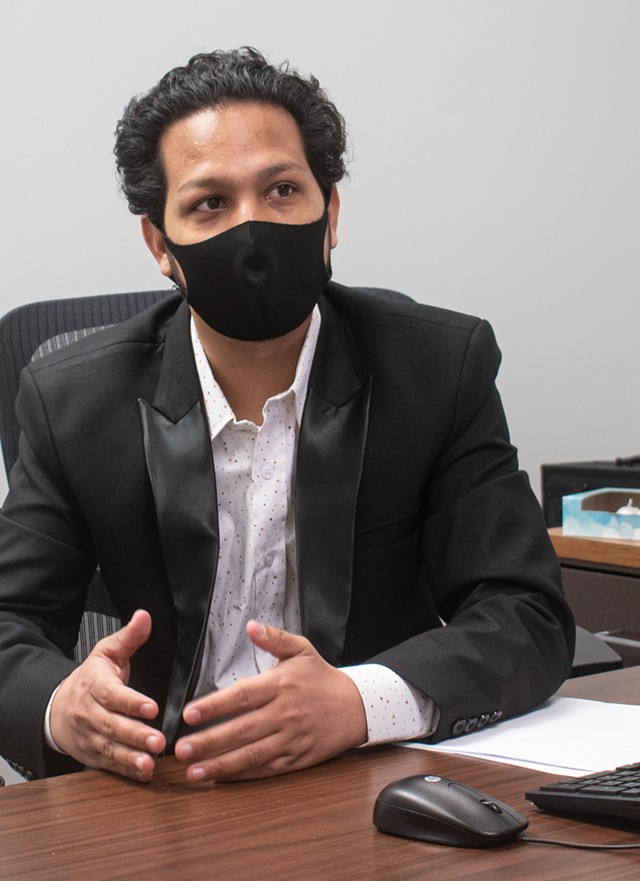 They were among a wave of nearly 2,600 Bhutanese refugees who settled in the city, mostly in and around the Jones Square Park area between Dewey and Lake avenues. Within a few years of their arrival, their community reportedly documented some 300 incidents of violence and bullying at the hands of longtime neighborhood residents.

Khadka recalled being sucker-punched in the back of the head and stripped of his bus pass. His father, Gokul, was beaten and robbed of the few dollars in his pocket by three men while walking along Lake Avenue in 2014.

“We tried to find him, we looked all day long, we couldn’t find him,” Khadka said. “In the middle of the night, we got a call from Strong Hospital, saying my dad was in the hospital.”

His uncle, his brother, his friends, it seemed everyone had a story to tell of violence against them, due to nothing more than looking different than the people around them.

A year after his father was attacked, Khadka recalled, his life took a turn while in a car with a friend heading along Route 104. At an intersection, a young woman stood holding a sign indicating she was homeless. Khadka was moved by the image and urged his friend behind the wheel to pull over.

“I had $20 in my pocket,” Khadka said. “I don’t know if she understood me, but I did try to communicate with her, I tried to share my story of where I came from. I gave whatever I had, and I said, ‘I don’t know if this is going to help you, but I will be praying for you tonight.’”

Having grown up without a home, he saw himself in that woman on the roadside, and believed his community would, too. He and a few of his friends raised cash from Rochester’s Nepali-owned stores to clothe and feed the homeless, many of whom were then living in an encampment beneath the Frederick Douglass-Susan B. Anthony Bridge.

“I told (the store owners), ‘Look, where we came from, our life was very different, and we can help people who are like us,’” Khadka said.

The effort would be the catalyst for the House of Refuge. Khadka was 23 when he had the idea to pull together Rochester’s “new Americans” — a term Khadka prefers to “refugees” — and help them help themselves by getting an education, starting businesses, and navigating the social system they inherited. 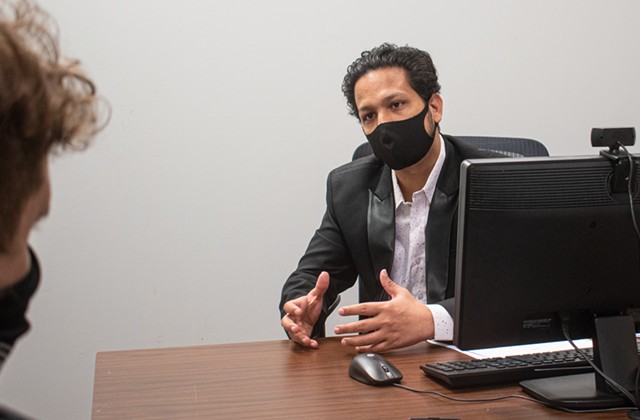 That year, the House of Refuge had four volunteers. Today, there are 28, and Khadka estimates the organization serves more than 2,000 new Americans each year. He’s proud of the accomplishment while acknowledging there is more work to do, particularly in his new role with the city’s New Americans Advisory Council.

“When we talk about the federal government, or the state, or the city, they like to talk about big organizations, but they often don’t really care about the grassroot organizations that are giving time voluntarily, who are doing amazing work,” Khadka said. “But they don’t really get the support they need, or the resources.”

In 2019, Khadka tried firsthand to get the new American community representation in city government when he ran for City Council as a candidate for the Northwest District. He didn’t make it to the ballot, but that didn’t matter to Khadka.

Between 2002 and 2019, 8,093 refugees resettled in Rochester, according to Refugee Processing Center data kept by the federal State Department. Bhutanese and Burmese people topped the list, at 2,588 and 1,405, respectively.

But refugees come from all over, from the Democratic Republic of the Congo, Cuba, Ukraine, Somalia, Sudan, and Syria, to name a few countries.

They have often survived war, disease, torture, and political persecution. They arrive here from desperate camps, where they lived for years not knowing when, or if, they would be resettled in a new land.

Refugees who are admitted to the United States are subjected to an extensive vetting process that can take up to two years and involves multiple background checks, interviews with officials from the United Nations, the State Department, and Homeland Security, and placement with an American resettlement agency.

In Rochester, that agency is typically the Catholic Family Center, which, until the Trump administration, was assisting more than 600 new refugees a year with housing, social services, education, and job placement. The latest figures suggest about 100 refugees are now settling in Rochester annually.

Kaif Ali, of the Center for Refugee Health on Alexander Street, a one-stop shop for health services for refugees operated by Rochester Regional Health, said resources for refugees run by former refugees are a necessity.

Ali said the culture shock many newcomers experience can lead to their communities being insular. Neighbors rely on neighbors because they share a cultural bond, and there can exist a mistrust of outsiders.

“They tend to stay in their own little community, because they feel comfortable with themselves,” Ali said. “Because they don’t know the American culture, is it acceptable to knock on a door if you need water, if you need sugar?”

Ali said the situation, coupled with lack of outreach into the communities, can lead to young new Americans often falling through the cracks.

“They come to this come country at a young age, they don’t have a role model, and they tend to follow the wrong path,” Ali said. “No job, no schooling, and no support to get them on the right path.”

For about a year, Khadka’s day job has been at the Rochester Rehabilitation Center, where he works to connect refugees with employment and other vital services.
Rochester Rehab’s Director of Employment Connection Mary Lou McCloud described Khadka as being wise beyond his years.

“He knows things you’d figure someone his age shouldn’t know,” McCloud said. “But the thing is, he’s always willing to learn more, and he realizes he doesn’t know it all.
One of the things particular about him is his integrity, his work ethic, he’s a man of his word. Nowadays, that is so important. He talks the talk, but he also walks the walk.”

Now married with a son and daughter, Khadka has begun to establish the life he once dreamed of.

But, he said, the recent spike in violence against Asian Americans during the pandemic is a stark reminder that there is work to be done.

“We came here to live a life of freedom, and that starts with governmental agencies taking the lead,” Khadka said. “And also the broader community to really pay attention to what is happening.”