I found Tony's Diner & Vietnamese Cuisine by getting slightly lost. It's in the previous location of Paola's Burrito Place & Mexican Grill, the family restaurant that I'd pass on the left when traveling north on Culver. Even after Paola's closed, the building was a vibrantly colored landmark I used for determining how far I'd traveled. One day, the bright orange was gone, and I was disoriented when I didn't realize I had passed it and was already at Culver and Empire, looking at Donuts Delite.

When I saw the name of the new place, I was not sure what to expect. What came to mind was a serving of eggs and waffles topped with fish oil and chili sauce, with a hot cup of coffee mixed with sweetened condensed milk. Though I am not 100% against the idea of this, it's not the case for Tony's. When owner Anthony Lam opened the restaurant in January, the original plan was to serve breakfast food in the morning and Vietnamese food in the afternoon and evening. More people came for the Vietnamese food, he says, so he stuck with that.

The name stands, for now. After all, it did draw me in, and when I visited there was a steady flow of customers entering to pick up orders and leaving with smiles on their faces.

This is not Lam's first venture. He helped his wife Hao Tran open and run Nam Vang on Lyell Avenue, another successful Vietnamese restaurant on the West Side (they have since sold the business to open Tony's). Before Nam Vang, Lam was a chef for Wegmans for more than a decade, and his skills were so highly acclaimed that he was requested to train colleagues from other states.

Anthony Lam and Hao Tran's own culinary talents and skills do not come from formal training, though. Their knowledge is based on more than 30 years of work in other East Asian restaurants throughout the area, as well as memories of family recipes from their youth. This fact contributes to the unique flavors on the menu. Nothing is too formulaic; each item has a personal touch.

For example, according to Anthony's son and restaurant manager Brian Lam, while some places use pre-made or frozen dough for their pot-stickers, the wrappings for the gyoza (chicken, pork, or vegetable dumplings, $6) are made fresh daily from pulped pumpkin. And the freshest possible ingredients are used in all the dishes; nothing is frozen, and no powder mixes are allowed. The Sesame chicken is made from scratch, too. And even with all the care taken for the fresh ingredients and style, Tony's is still less expensive than many other restaurants.

Vietnamese food is gaining popularity all over. It's more than just phở ($9-$12) and bánh mì sandwiches ($4). Some particular food items have become so popular they appear on non-Vietnamese restaurant menus. But Brian warns that nothing is like the original, and says he once tried a bánh mì that was half the size of his father's sandwich and three times Tony's price, and used ground pork instead of the traditional solid, grilled slices of meat and vegetables.

Many come to Tony's for the phở because of its distinct flavor, according to Brian. The in-house recipe for the broth is quite popular; it's a bit bolder in its base and a bit less salty than others. Tony's offers these and other traditional Vietnamese dishes, such as the bánh xèo ($9), a crispy, savory pancake, which I assumed would be a small appetizer, like a scallion pancake. To my surprise, bánh xèo is a meal on its own; the dish fills half a plate and comes with a healthy portion of greens. The dough envelopes a mix of shrimp, sprouts, onions, and other vegetables. Every crunch yielded a burst of flavor. 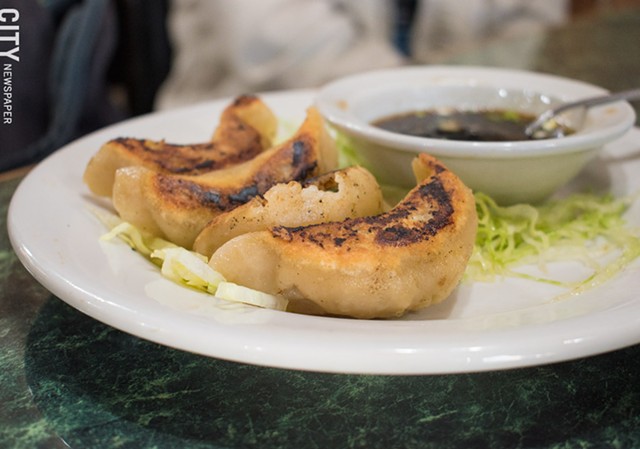 I also tried the lighter gỏi đu đủ ($8), a sweet-spicy salad with shredded papaya and carrots for a base instead of lettuce. It can be eaten as is, or they can prepare it with shrimp (add $4) or pork (add $2).

As Tony's grows, so will the menu. Brian says that his father is working to adjust choices to accommodate people who are interested in lighter fare or vegetarian and vegan options.

Union Street Bakery at the Rochester Public Market has closed.