Beyond Clinton and Trump

Third-party candidates are in a weird spot. They're blamed for "siphoning" votes from the major parties and possibly altering an election — Bush-Gore-Nader comes to mind. But people who vote for a third-party candidate are often told they're throwing their votes away.

This utterly peculiar presidential election is yielding a common complaint: "Why do I have to vote for one of these two ____?"

The answer is: You don't. There are other people in the race besides Clinton and Trump. Gary Johnson, the former governor of New Mexico, is running on the Libertarian ticket with former Massachusetts governor Bill Weld. And Dr. Jill Stein is running on the Green Party ticket with Ajamu Baraka, a human rights activist, as her running mate.

Below are profiles of Johnson and Stein, who are the only two third-party presidential candidates on the ballot in New York.

Libertarian presidential candidate Gary Johnson believes climate change is caused by people. He also believes a free-market economy is part of the fix.

And he cites an Environmental Protection Agency statistic that says the US is responsible for 16 percent of the carbon load worldwide.

"Carbon does not know any boundaries," Johnson says.

But he also says the practice of burning coal and building more coal facilities is "not happening from a free market standpoint." And that natural gas is taking coal's place thanks to the free market.

Johnson, former governor of New Mexico, is running with former Massachusetts governor Bill Weld on the third-party ticket. The campaign gained attention after Bernie Sanders lost to Hillary Clinton in the Democratic primary. 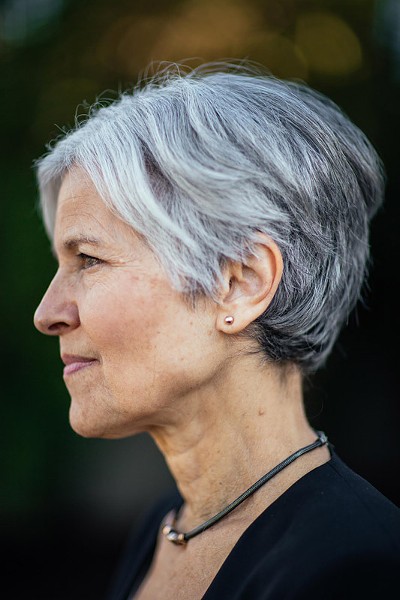 Johnson says some of this attention reflects the fact that the Libertarian ticket consists of two former two-term Republican governors elected in heavily Democratic states, who are "fiscally conservative, socially inclusive, and skeptical that military intervention will result in a safer world," combined with the polarity generated by Hillary Clinton and Donald Trump.

That attention has also generated more interest in the Libertarian Party, and Libertarian voter registration has skyrocketed, "relatively," Johnson says.

When asked about what his campaign could take away from Sanders' run for office, Johnson says he agrees with most of what Sanders has to say, but that he and Sanders part ways on the economy.

Crony capitalism is when the government involves itself in business and allows for favoritism, he says.

In keeping with his Libertarian platform, Johnson says he and Weld are in favor of the controversial Trans-Pacific Partnership trade agreement because it will create US jobs and eliminate a lot of tariffs and advance free trade.

Johnson says he wants more government transparency, and that he has not taken any campaign money from the Koch brothers that he "knows of."

"I do believe that an individual should be able to make unlimited contributions, but it should be 100 percent transparent and there is no transparency on Super PAC's," he says.

Johnson made headlines and not in a good way last week when MSNBC's Chris Matthews asked him to name a foreign leader he admires and Johnson struggled. He said he was having a "brain freeze."

Johnson ran for president in 2012 and got less than 1 percent of the vote.

A physician and environmental-health advocate, Dr. Jill Stein was the Green Party's 2012 presidential candidate and is running this time with human rights activist Ajamu Baraka as her VP pick.

Stein has as much to say about American politics as she does about her Power to the People Plan: A Green New Deal, which calls for transitioning to 100-percent clean and renewable energy by 2030 and investing in public transit, sustainable agriculture, and conservation, which she says would create jobs.

Stein says she's in the Green Party because the other two parties are "under the thumb of war profiteers, predatory banks, and fossil fuel pirates."

She says she wants to mobilize the 43 million students and young people burdened by student debt, calling this group "a self-organizing demographic" through mechanisms such as social media. One element of her platform is to cancel education debt for those students.

"It's a no-brainer," Stein says, pointing out that the same was done for the banks.

Health care, education, jobs, and housing are all rights, Stein says, calling for "Medicare For All" single-payer public health insurance program, an end to high-stakes testing, a $15 minimum wage, and housing that benefits the public good. Renovating and restoring housing also creates jobs, she says.

Stein also calls for making war over oil obsolete, a carbon tax, public ownership of energy production, and a transition to renewable fuels. Greening the energy system also avoids the health consequences of fossil fuels, she says, and the catastrophe that is climate change makes "Pearl Harbor look like small potatoes."

Barack Obama "put his troops on the shelf after he was elected," Stein says, but she wants to use the "bully pulpit" that is the presidency to create "transformational change" and "turn the White House into a Green House in 2016."

Camilla Mortensen is the editor of the Eugene Weekly in Eugene, Oregon. Longer versions of these articles originally ran in earlier Weekly issues.