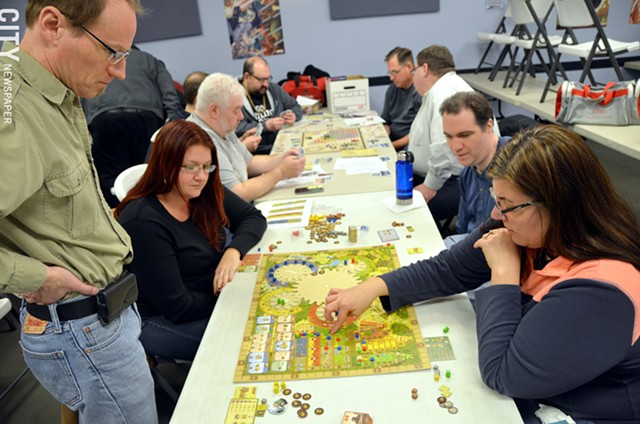 Millennium Games: A go-to for gamers of all ages

Josh von Rathonyi sat next to his 6-year-old nephew Braxton, offering him encouragement and coaching, as the boy faced off against an opponent three times his age in an intense game of Pokemon cards.

“You just got Marnied,” von Rathonyi told the boy. “So, what should your next move be?”

As Braxton contemplated his move, his opponent, 20-year-old Dom Englebert, of Victor, sat across from him patiently, and offered this oblivious onlooker tips on using Flaaffy cards and “dynamic spark attacks” and “knockouts.”

“I come here every week, as much as I can,” Englebert said.

Here was the backroom of Millennium Games in Henrietta, where their match was one of dozens of card games playing out on a cold fall evening.

That gaming should be a fun and social affair is the philosophy of the shop, a cornerstone of hobby gaming in the region for 35 years. To that end, the store dedicates more than 2,000 square feet to play space and holds free tournaments almost nightly.

The evening was set aside for Pokemon, Digimon, and Magic: The Gathering contests, and drew players as young as Braxton to middle-aged men and women looking to test their gaming skills in a safe and clean environment.

“I came here when I was his age,” von Rathonyi, 33, who lives in Greece, said of his nephew. “He’s the only one here who’s under 10 and everyone is patient with him. People here understand that he is the younger generation of gaming.”

Millennium Games is not your everyday toy store that carries dollhouses and train sets and plastic pistols. It specializes in board games and fantasy games, and has thousands of titles in stock.

The shop claims to be one the largest independent brick-and-mortar gaming retailers in the country, and its 7,000-square-foot showroom at the front of the store lives up to what one might expect from such a place.

There are rows upon rows of shelves lined with board games, card games, role-playing games, miniature figurines, trivia games, classic party games, and disc golf discs — from the tried-and-true to the brand new.

(This oblivious onlooker walked out with a “Ted Lasso” party game because “I believe in believe.”)

The selection, friendly and knowledgeable staff, and laid back atmosphere make Millennium Games a go-to for gamers across Greater Rochester.

“It’s not a big box store,” von Rathonyi said. “It is a small store that cares about the people, and that’s important.” — DAVID ANDREATTA