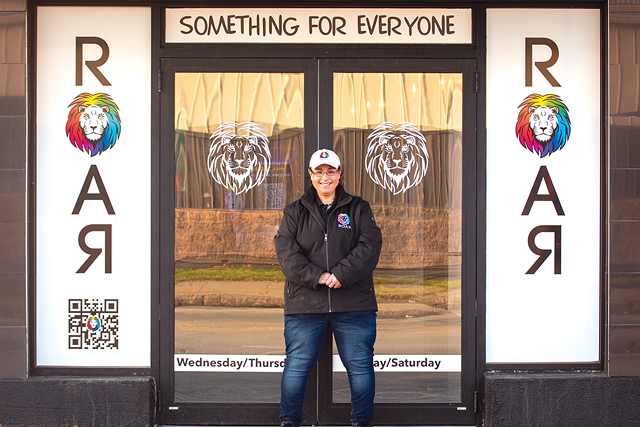 When Lori Lippa picks up the phone on a Sunday evening, she’s worked almost as many hours over the weekend as the average person does in an entire week.

It’s the thick of the holiday season, and she’s a full-time Avon makeup and skincare sales representative (yes, as in “Avon calling”) who moonlights as a bouncer at ROAR, one of Rochester’s hottest nightclubs.

And at 51, this is her first bouncer gig.

When Lippa’s longtime best friend Michael Ruger (AKA DJ Mighty Mic) opened ROAR in 2019 with co-owner David Chappius (AKA drag queen DeeDee DuBois), she was one of the first employees.

She’s been involved in the bar industry since 1994 — her uncle owned the former Club GQ — and has been known as “Mama” in the local LGBTQ+ community for more than half her life.

After watching Lippa with guests for a few weeks, the owners encouraged her to become a certified security guard.

“Kids felt safe with me when they couldn’t come out to their parents,” Lippa said. “Now, I’m the first and last face they see at ROAR, and I want to make sure they know we accept them and love them, and they can come to us right away if they have an issue.”

In the wake of recent shootings at LBGTQ clubs around the nation, Lippa and the rest of the ROAR team have upped safety protocols at the door, including bag checks and pat downs — and are often thanked by the guests for doing so.

In her three years at the door, Lippa said, she has had very few altercations.

“(The security team) toes the line of authority and respect because the guests know us,” Lippa said. “They know ROAR is there for them and they want to keep it around. If we get someone who’s scuffling or had too much to drink, we escort them out.

“But there’s never a situation where people are throwing punches,” Lippa went on. “We’re not ‘Road House,’ we’re ROAR.”

In November 2021, ROAR was recognized with the New York State Empire Award for its contributions to equality. The award was given on Transgender Day of Remembrance, which honors lives lost due to anti-transgender violence.

“The owners are unsung heroes,” Lippa said. “They do so much behind the scenes to make this place safe and fun. This is not just a dance club, it’s a community center.”

In addition to Avon and bouncing, Lippa also fosters for Kitten Korner Rescue (she’s helped 23 cats and kittens find a home by her count), and during the pandemic lockdown, she began grocery shopping for some of her senior Avon customers (what she refers to as “kind of like InstaCart, but InstaLippa”). Admittedly, she thrives on staying busy.

If you say hello to her at ROAR on the weekends, be prepared for a big hug.