Benton Sillick: the sober expectations of a non-rock star

May 19, 2020
Musician Benton Sillick looks the part of the quintessential hipster, bearded and typically clad in a vintage t-shirt and some kind of cap, whether it’s of the knit, baseball, or trucker-hat variety. Pierced ears bookend either side of the cap, as if to both project effortless cool and to emphasize that Sillick is more of a listener than a talker. He’s a quiet person who doesn’t necessarily seek out conversation, but he won’t back away from one either. His persona is characterized by soft-spoken strength devoid of pretension; what you see is what you get. 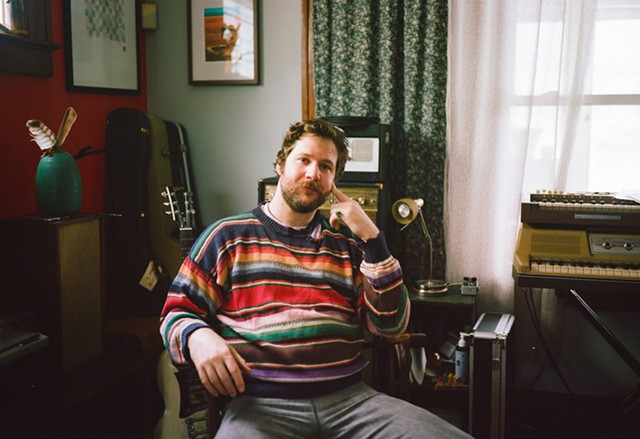 But what you see now of the 33-year-old Fairport native — who just released his debut full-length cassette tape “Always Kinda Nothing” under the moniker The Heavy Love Trust — is very different from what you would have seen had you crossed paths with him in New York City just six years ago, before he achieved his hard-won sobriety.

Sillick had been an undergraduate music education student with a concentration in trumpet at The Crane School of Music in Potsdam, where he found numerous opportunities to play gigs with like-minded musicians at school events, house parties, and even a funk-music gig at a federal prison once. By that time, recreational use of alcohol on the weekends had progressed to nightly drinking.

After graduation, he took a year off before returning to school in 2010 to pursue a master’s degree in musicology at CUNY Brooklyn. But an unexpected, major life event proved to be a turning point from which Sillick struggled to recover.

In January 2011, his father Richard — with whom Sillick was close — was diagnosed with cancer. By August of that year, he was dead. Sillick was home on summer break when it happened. Looking back, he says he was predisposed to drug and alcohol addiction, but that he used his father’s death as an excuse to lean into those dependencies. He moved back to New York City just a few days afterward. “I kind of couldn’t wait to get back,” he says. “I was like, ‘Man, I can really do anything now.’”

In New York, Sillick began using cocaine and his academic work suffered. He attended class but never registered for exams or completed his thesis. “I couldn’t be held responsible as soon as I stepped foot off-campus, because I was immediately stopping at the liquor store and calling a drug dealer,” he says.

The combination of alcohol and cocaine propelled a rapid descent into lying, cheating, and stealing. How bad did it get?

“I was using all of my student loan check to buy cocaine, so that was running out really quickly,” Sillick says. “I was manipulating my poor mother — who had just lost her husband, my dad — into sending me more money.”

Sillick eventually got a job at a Lower East Side restaurant, where his brother Mac was managing. By 2014, Sillick had gotten in the habit of drinking the restaurant’s whiskey in the basement during shifts and stealing money from the cash register to support his drug habit. In February, things came to a head when his girlfriend broke things off and kicked him out of their apartment.

After a heated phone conversation with his brother and their mother, Linda, Sillick decided to move back home to Rochester. “I kept on just saying, ‘I give up, I give up, I give up,’” he says. “And that was one of the best and worst moments of my life.”

Upon moving home, Sillick entered an outpatient rehabilitation program at Unity Hospital and began working at Hart’s Local Grocers in August. By October, he had met fellow musician Matt O’Brian and joined his roots reggae-soul band Thunder Body, as the trumpeter in its newly formed brass section. 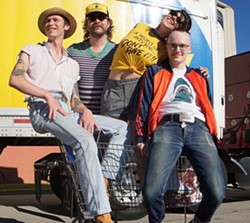 That return to music in 2014 precipitated some of Sillick’s most significant friendships and musical partnerships to-date. As a bassist, he would later join forces with Sam Snyder, then one of Thunder Body’s guitarists, in the band Overhand Sam & Bad Weapon. Sillick would also meet his future partner Ana Emily Monaco at a Thunder Body gig, and go on to play bass in her garage rock band Anamon. The three musicians now live together in an unassuming, cozy house on Wisconsin Street in Rochester’s North Winton neighborhood.


“I think we play off of each other well,” Monaco says of her creative collaboration with Sillick, for whom she plays keyboards in The Heavy Love Trust. “We also just live together and have a lot of hats that we wear together, so we just have a really good understanding about who we are as people that lends itself to writing music together very well.”

Anamon's music finds chaos in the quiet
The band stopped into CITY to discuss chaos, maintaining its edge, andfeeling alone
By Frank De Blase
Music Features
Having achieved six continuous years of sobriety in February, Sillick sees with clarity that his return to music would have been a struggle without first coming to terms with addictions. “The first band I joined in sobriety was Thunder Body; there is a bottle of tequila that lives on stage, and lots of weed,” he says. “If I had not gotten to a point of comfortability with my own sobriety, I think it would have been a disaster, really. And you know, sobriety taught me how to approach situations, in a sense of like, ‘Why am I there? What are my motives?’

“If I’m there to play music and spread good energy, and spread love, and love the people in attendance and love my bandmates, and connect with them in a way, then I can just be happy and content with that,” Sillick says. “If I’m there to be around booze and drugs, and hang out and party and be part of that atmosphere, then clearly I’m there for the wrong reason.”

In January 2018, Sillick began writing his own songs. He sat down at the piano and wrote three somber tunes. By 2019, he was learning to play the guitar and arrange his piano-based songs for his new instrument of choice. At that point, he became more comfortable with writing songs in a rock band context, which he did not want to do from behind a piano. “I think band leaders that play piano just look dumb,” he says. “I wanted to play guitar.”

These initial songs became the seeds that grew into the seven fully-formed songs on Sillick’s new album, “Always Kinda Nothing” — record, mixed, and mastered by Snyder. The songwriting on it is polished, but the music is, by design, far from innovative. Sillick is a musician who wears his influences — in this case, country western, honky-tonk, and rock — on his sleeves, and he isn’t concerned about being unoriginal.

“Everybody says the same thing: ‘It sounds like Neil Young. I really like your lyrics,’” he says. “And that’s exactly what I’m going for.”

Sillick also cites the indie rock band Silver Jews as a major inspiration, which elicits an emotional response from him with its focus on lyrics and delivery. In his own music, Sillick uses tried-and-true country rock equations to elevate life’s mundane moments, as articulated in his lyrics. There isn’t any effort to couch the music in the artifice of achieving some sort of fame or having some sort of rock-star status. If anything, the music sounds more like the soundtrack of just getting by.


“Tour Song” details the decidedly unromantic realities of life for a musician on the road. On “The Pits,” Sillick uses straightforward and unflowery language to make an honest appraisal of his life and what he values most: “Sometimes life is the pits/ Throw in the towel, and throw a fit, and cry/ I love my friends to death/ And my dog will do no wrong till his dying breath.”


In both his music and in conversation, Sillick comes off as unwaveringly realistic and at first, pessimistic. “If you lose hope, then it’s kind of like, what have you got to lose?” he says. “I’m not saying hope of an internal feeling of happiness. If you lose hope of the external achievements, it’s just more realistic. I don’t know. I think the age of dreaming is dying, and I think the sooner you stomp out your dreams, the happier you might be.”

But it’s more nuanced than that. Sillick says that it was important for him to let go of his attachment to the outward signifiers of success — album sales, concert attendance, and increased social cachet among the music community — and choose instead to please himself through his art, rather than others.


The COVID-19 quarantine has only helped Sillick to further disengage from the conventional measurements of achievement. Currently on furlough from his job as a lunch cook at The Owl House and receiving a paycheck through the Payroll Protection Program, Sillick has discovered a nascent talent for drawing bust portraits of friends, family members, and bands such as Mosaic Foundation and The Honey Smugglers. He’s also written two new songs during this time of self-isolation, playing each anywhere from 10 to 15 times a day.

When Sillick is asked what success will look like five years down the road, his aspirations are modest. He’ll continue to write music, play live, and produce cassettes and digital recordings. But achieving monetary success and stability through music is far from his mind. 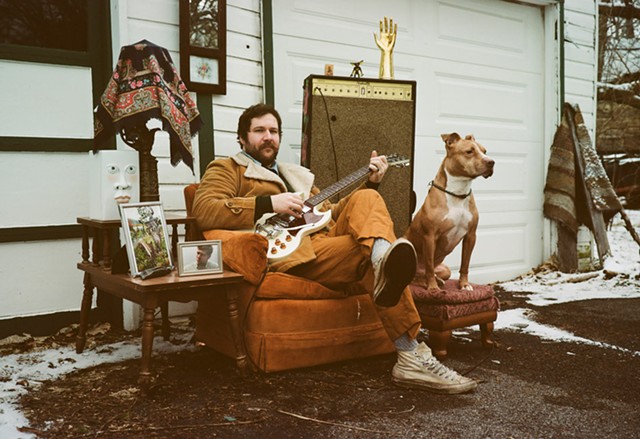 “I don’t have any delusions anymore about transitioning to a point where music is my main income,” he says. "‘Cause the only people I know who do that, honestly, are people who play in wedding bands and tribute bands and cover bands. I don’t want to do that.”