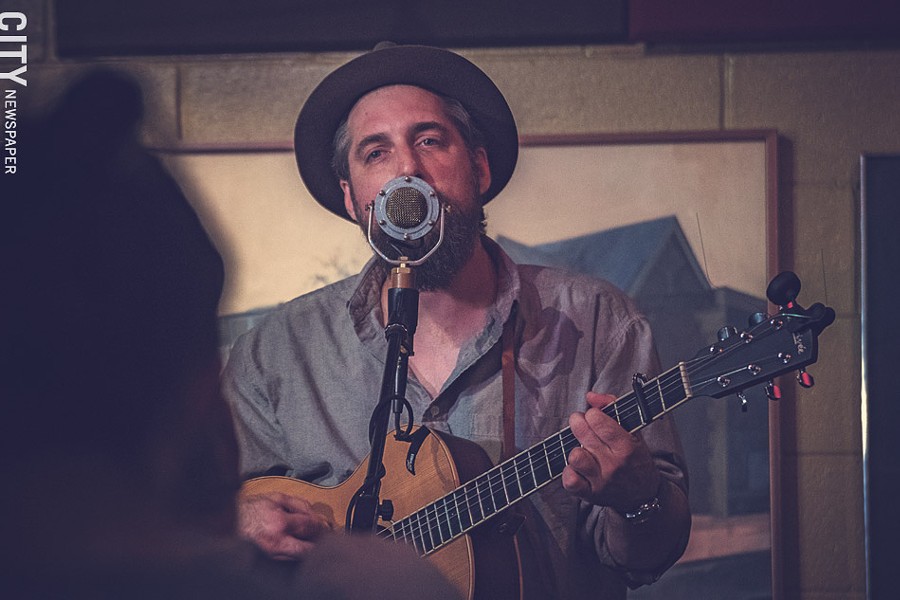 Picture yourself in backwoods nature with fresh country air and the sun shining down on your face — Benny Bleu's music is the gentle wind brushing past your hair to cool the sweat from your brow. Ben Haravitch, better known as Benny Bleu, performs soft and swaying, breezy, country folk lullabies that blend traditional and contemporary folk feels into a captivatingly refreshing experience.

Haravitch is a local singer-songwriter, banjo teacher, mobile recording engineer, and ultimately a modern-day folk storyteller. He’s a member of respected groups such as Mount Pleasant String Band, The Brothers Blue, and The Crawdiddies, and he released his debut solo album, "Warm Prickly," in March. As if this guy wasn't busy enough, he's also in the middle of a month-long residency at The Little Theatre Café, with upcoming shows on August 22 and 29.

Born in the Finger Lakes, Haravitch was surrounded by musicians as he grew up: his mother played spoons in a local contra dance band, his grandfather played New Orleans-style piano at family gatherings, and his neighbors practiced their music nearby.

"I was just a little kid," Haravitch says. "I'd go over and watch 'em, sometimes they'd practice in my driveway. So I got exposed to roots music pretty early on. It's just kind of always been there."

As an adult Haravitch worked as an environmental geologist in Rochester, and filled up his nights and weekends with gigs. He decided to pursue music full-time in 2017 when he realized his heart was more in the music. “I just found, hey, if I’m getting this much work, I might as well try and follow my motivation and do that instead,” he says. “So I quite the geology job and haven’t looked back.”

Haravitch began playing banjo in The Crawdiddies in 2013, and helped maintain the band's original acoustic southern-blues style. In the summer of 2016, he formed Mount Pleasant String Band with his buddy Aaron Lipp, as they were both simultaneously getting into old-time fiddle and banjo playing, and over time guitarist Cap Cooke and bassist Doug Henrie joined them.

Haravitch also plays banjo and bass in a casual old-time string collective called The Gone Homes, featuring Cooke on guitar and Sam Schmidt on fiddle, both members of Ithaca-based band The Flywheels. “We're not like an actively gigging band,” Haravitch says. “We're just kinda friends that, when the opportunity comes up, we take it. More than anything, I think we just like each other's company. And we all focus on the same things about the music."

In the spring of 2015, Haravitch and his lifelong friend Matt Sperber formed The Brothers Blue, which evolved from their high school Pink Floyd and RUSH cover band, Blue Lemons. While everyone else in the group had come up with a citrus-themed nickname, Haravitch and Sperber went by Benny Blue and Matthew Blue. Consisting of Haravitch on banjo, bass, and guitar; Sperber on guitar and bass; and Charlie Coughlin on fiddle and mandolin; The Brothers Blue plays original folk music that's rooted in old-time fiddle tunes, featuring three-part harmonies woven over a range of danceable instrumental interplay.

It wasn't until this past year that Haravitch began developing his own solo material as Benny Bleu. Having had the nickname Benny Blue since his college days, Haravitch switched to the French spelling in order to separate the moniker from his previous projects, and nod to the Cajun flair that's sprinkled throughout his music.

Like many other musicians, Haravitch says he creates music that he wants to hear, but doesn’t exist. “I had this sound of like, fiddle tunes played at a certain tempo with a certain groove,” he says. “Not necessarily on a fiddle, but just like these melodic tunes played a certain way that for whatever reason — anxiety or sleeplessness — I just needed this sound to soothe me. And I couldn't find it anywhere, and so I just tried to start writing songs that fit this idea in my head, and that's when a lot of these Benny Bleu songs came about."

Backed by the Benny Bleu Band, which has rotating members and usually features a drummer, a bass player, and some kind of melody instrument such as lap steel guitar, Benny Bleu delivers an earthy mix of country, roots, blues, and old-time folk covers and originals.

“I try to make everything I do feel good,” Haravitch says. "More important than instrumental dexterity, more important than lyrics or harmonies, I focus on the groove and I try to make just about everything I do danceable in some way. And so, I hope that everyone that comes to see me play hears music that feels good. I hope I can pitch some questions that will get people thinking about things, and I hope I might offer a bit of soothing for people who need some soothing."

Benny Bleu's debut album, "Warm Prickly," features a snuggly-looking porcupine on the cover, and Haravitch says the title refers to “people who are prickly people, who may not be the nicest or the warmest. They're not fuzzy people, they're prickly people. But it doesn't mean that they're bad people. I use it as a metaphor to represent homeless folks, folks that might be struggling with substance use, basically just people who've fallen through the cracks of our society and don't have a safety net to catch them. Just making a gentle suggestion that we can all soften our hearts to everyone in our society, including the porcupines."

While the album includes instrumental reinterpretations of old-time string band tunes, it also features some of Haravitch's original story-songs, including the main metaphorical track, "The Porcupine," about a prickly little guy that just wants to be loved. "Serenity Song" offers consolation for a person feeling guilty after the loss of a young loved one — masked under an ironically light-hearted string groove — while "Lonesome Hill" reflects the relationships in our lives that we might take for granted, and how we tend to isolate ourselves from the people who are right there willing to help us. Thinking along the same line, “Maddy-O” is a jingly lullaby written from the perspective of the person trying to help, but who’s realized they're reaching a point where it's getting difficult to provide the kind of support that person needs.

Haravitch has a sweet and clear baritone voice with a comforting charisma and soft southern drawl, accented by heart-wrenching backing harmonies. Delivering invigorating string rhythms and sympathetic melodies that are soothing to the soul, "Warm Prickly" is a compassionate “chin up” for those facing loneliness or personal struggles.

Haravitch says he’s on a mission to make music that functions as an outlet in people's lives the way it used to, and that he plans to host more community events such as square dances and keep expanding his knowledge of traditional genres, from Irish to Afro-Cuban and other cultures.

"I don't see my curiosity dwindling anytime soon," Haravitch says. "I'm sure I'll be getting into different kinds of music forever."