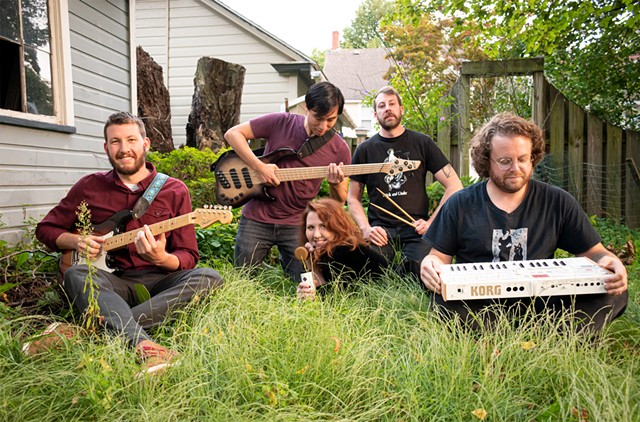 Live music is finally returning to Rochester, and we're eager to get back into the best grooves and sip some fine drinks to celebrate. On Thursday, June 24, at 7 p.m., the neo-soul and retro rock quintet Bellwether Breaks will bring their bewitching style to Photo City Music Hall — along with local one-man band Ryan Sutherland — for a vibrant night.

Emerging around the beginning of the pandemic, the Rochester-based Bellwether Breaks consists of frontwoman Elyse Coughlin, guitarist Peter Goebel, drummer Dave Goebel, keyboardist Chris Coon, and bassist Eugene Bisdikian. The five-piece incorporates minimal, soul-infused grooves paired perfectly with Coughlin’s cinematic vocal delivery. Even though the band has only released three singles to this point, Bellwether Breaks will be playing a mixture of original material and covers, as well as showcasing new material they’ll be releasing officially in the near-future.


The most-recent single, “About a Girl,” released in May, is mesmerizing with its vintage rock styling and enchanting storytelling. The band’s debut single from 2020, “Long Way Down,” is a slow-burning shuffle, incorporating swirling keyboards that complement Coughlin’s commanding vocals. The band’s spacey and mystical homages to early rock ‘n’ roll are less an attempt at pastiche, and more a means to achieving its own spiritual tone.


Local singer-songwriter Ryan Sutherland will be showcasing his loose folk arrangements Thursday night. Sutherland’s adventurous soundscapes alternate from twangy Americana to blues rock and psych rock, in a chameleon-like style that resembles M. Ward and late-era Elvis Costello. His latest single, “My Shadow,” still employs signature folk-rock style, but with a woozy psychedelic swirl added into the mix. Sutherland released his eponymous debut album in 2018, and its follow-up “Loner’s Paradise” this past January. Sutherland is still experimenting with his sound, and its live quality fits the bill nicely.