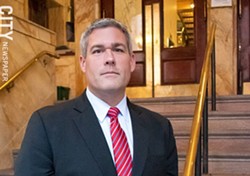 County Executive Adam Bello’s plan to expand a county program that pairs mental health clinicians with police officers responding to calls in which a person is experiencing a crisis has hit a snag.

Bello announced in September that the county was putting up $360,000 to expand its Forensic Intervention Team, an amount meant to match $300,000 that the city had designated to expand the FIT or bolster its own programs to provide a non-law enforcement response to mental health calls. Bello said at the time that the additional funding would allow the FIT to expand to around-the-clock service.

But during a county Legislature committee meeting Tuesday, administration officials under questioning by Republican Legislator George Hebert acknowledged that the expansion hasn’t yet happened.

Kelly Wilmot, associate director of operations and planning at the county Office of Mental Health, told Hebert that the money from the city never materialized. Corinda Crossdale, deputy county executive for health and human services, added that a county task force is conducting a deep review of how it responds to behavioral health crises.

“This isn’t just about staffing up FIT, but it’s looking at our entire system and how it interacts together,” Crossdale said.

The county also wasn’t guaranteed the city money. When Mayor Lovely Warren announced it, she stated it would go either to the FIT or to “retool” the city’s Family and Crisis Intervention Team, which provides counseling and follow-up services to crime victims.

In October, the mayor launched the city’s new Office of Crisis Intervention Services, which is housed in the Department of Recreation and Human Services. Through that office, response teams would be deployed to homicide scenes to support victims, and to mental health calls, domestic violence calls, and other crises to provide counseling and connect people in need with services.

“The dollars were simply reallocated to that because it was determined that would better achieve the goal of having a non-police response” to mental health calls and other crisis calls, said city spokesperson Justin Roj.

The status of the county’s FIT was raised Monday by the county Legislature’s Black and Asian Democratic Caucus. The legislators released their recommendations for Bello’s 2021 budget proposal and called for the FIT to be expanded to 24/7 operations.